BUSINESS Plant-based meat in China: a bullish future without meat

Plant-based meat in China: a bullish future without meat 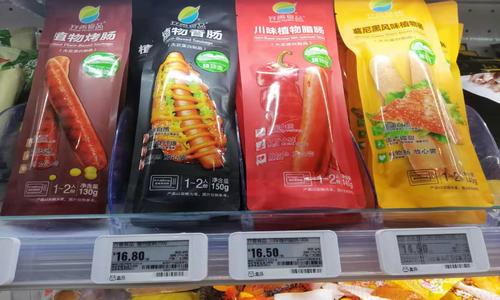 "Meatless meat" has been a buzzword that's not only dominating headlines but also a hot investment for investors. Ever since the US plant-based meat company Beyond Meat was listed on Nasdaq in May, the capital markets' response to the meat alternative was nothing short of a frenzy.

Beyond Meat's initial public offering price was $25 (177.29 yuan) per share, making it one of the most successful IPOs in 2019. Within three months, the alternative meat maker and its investors enjoyed a whopping 840 percent gain from its initial price.

The investment buzz in the US capital market is well resonated across the Pacific in China. Shuangta Food, a company based in East China's Shandong Province that produces pea protein witnessed a 192.5 percent jump of its share price in August compared to the beginning of the year.

The company recently made the first plant-based pork mooncakes during this year's Mid Autumn festival along with Zhen Meat, another alternative meat company. In Shanghai's A-share market, any company relating to faux meat saw their price soar.

China is no stranger to vegetarianism or even meat alternatives that are usually soy or mushroom-based. Historically, as the center of both Buddhism and Taoism in which both promote vegetarianism, China's faux-meat industry is arguably one of the oldest in the world.

When speaking of meat alternatives, there are usually two kinds. One kind is produced from plant-based protein. The other, which is on the horizon, is the so-called cell-based meat, which is produced from actual cells extracted from animals and cultivated in a lab.

The latter is still yet to be on the market, given its current high cost and potential ethical issues, and it still remains unclear whether the technology will eventually make it to the mass market, Zhou Qiyu, marketing manager at Whole Perfect Food told the Global Times. Whole Perfect Food is a Shenzhen-based company that has been making plant-based meat products since 1993. For now, the meat alternatives that are all the rage, whether in the US represented by Beyond Meat and Impossible Foods, or in China as in the alternative pork mooncakes, all fall under the umbrella category of plant-based meat.

However, as Zhou noted, there is a notable difference between the market demands of plant-based meat in the US and in China, due to different culinary habits.

Impossible Foods, for example, has a burger that famously bleeds all thanks to a molecule called heme that the company cultivated in yeast. However, while the heme-containing protein is seen as an exhilarating new advancement in the industry in the US, consumers and manufacturers in China are less likely to be impressed by the technology, which can mimic the color transformation in meat from red to brown during the cooking process.

"In the US the bleeding burger is very much sought after, because the preferred way of consuming a beef patty is probably medium rare," Zhou said, "but in China, what's more important is for plant-based meat to have that similar protein structure as animal muscle, so that the plant-based meat can be sliced, diced or minced just as the real meat."

In terms of the technology to change the protein structure, there has been incremental progress made over the years, but for now there is nothing that is "astonishingly new" at the moment, according to Zhou. For Whole Perfect Food, much pain was endured not to imitate the blood, but to restructure the protein in soy, peas and wheat and mix it differently with varying proportions so that the textures can be just right for Chinese styles of cooking.

While traditional faux-meat food has been catering mostly to the vegetarian or flexible vegetarian population in China, there is a new trend of vegetarianism behind the current hype of plant-based meat that is derived not just from religion, but a mixture of spirituality and an awareness of the health and environmental influence of eating meat.

"The traditional Buddhist vegetarian is definitely within our marketing target range," Hong Chichi, COO of Zhen Meat told the Global Times, "but we are also trying to appeal to a rising population that is opting for a vegetarian lifestyle out of concerns over what their food is doing to their body, to the environment, and to animal welfare."

According to Zhou, this is also the reason behind the capital market frenzy for the plant-base meat industry, despite what he said is a lack of a real 'groundbreaking' breakthrough for its production technology.

"There is a deeper societal anxiety over the environmental impact of the meat industry, and plant-based meat is attempting to provide a solution," Zhou said.

The solution is being applauded by some heavy hitters in the investment world. Bill Gates, who invested in Beyond Meat, famously tipped the "cow-free burger" as one of the top 10 Breakthrough Technologies of 2019 in the MIT Technology Review, given its potential to limit meat consumption.

Vegetarianism and veganism are still far from being mainstream in China, but there is a growing trend to eat less meat especially among China's younger generations.

"In our experience center for plant-based meat in Shenzhen, most people that turned up are young people, roughly aged between 18 and 35," Zhou said, "There is an almost innate curiosity for young people to try new things, especially when plant-based meat is now dubbed as a niche, technology -embedded product."

In terms of the environmental impact of the carbon footprint, plant-based meat does seem to alleviate some of the pressure that the traditional meat industry, especially beef, is imposing on world's environment.

According to research conducted by the University of Michigan back in 2018 on the production system of Beyond Burger, the production of the plant-based meat generates 90 percent less greenhouse gas emissions, requires 46 percent less energy and has more than 99 percent less impact on water scarcity than the traditional quarter- pound US beef patty.

The battle for China's meatless future

Given the sheer size of the existing market and its rising potential, China has been the target for many Western companies' expansion. Impossible Foods is planning to enter the market in the Chinese mainland, and it will be the "highest priority for future expansion", according to Impossible Foods' chief executive Pat O. Brown in a Reuters report.

The Western companies' ambition and eagerness to tap the Chinese market is hardly surprising. A report by the Xinhua News Agency shows that the number of vegetarians was over 50 million in 2015, with even more identifying themselves as flexible vegetarians.

However, the Western start-ups' conquest into the Chinese market will not be short of local challenges, as companies such as Whole Perfect Food have been developing a wide range of plant-based products tailored to Chinese tastes for decades.

Whole Perfect Food, for example, has been developing meat alternative products since 1993, and now has more than four lines of plant-based products, ranging from plant-based sausages, steaks and minced meat.

"We are also expanding the international market," Zhou said. "Our presence is strong in the market with 31 offices globally."

Apart from decade-old manufacturers, rising domestic players are also actively expanding the Chinese market. Zhen Meat's pork mooncakes debuted on the market, but the company has already struck a deal to provide fillings for dumplings and dim sums for Jin Ding Xuan, a restaurant chain based in Beijing, Hong told the Global Times.

The Western companies' attempt to bring their products to the dining tables in China is also facing potential legal and regulatory hurdles. Impossible Foods, for example, takes pride in the heme molecules in its products, but the heme molecule has not yet been approved as a food additive by Chinese authorities. The company is also currently using genetically modified soy for its products, which requires special permits to be imported to China.

"We welcome them into the market," Zhou said, "and we appreciate more limelight on the industry. But in terms of competition, they will have years of preparation to do before posing a real challenge to our business."