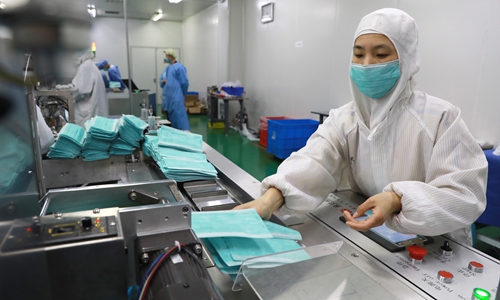 Strained global supplies of desperately needed medical products, from masks to test kits to ventilators, are coming under further pressure, as Chinese factories, the biggest source, must navigate complex and fast-changing domestic and foreign regulations amid what some insiders call "exaggerated and politicized 'quality concerns'" over Chinese-made products.

Potential delays or declines in exports of Chinese-made medical supplies could have huge implications for countries that depend on China for these life-saving products in their battle against the coronavirus pandemic.

With this in mind, Chinese analysts and officials are calling for the removal of regulatory barriers to ensure steady supplies.

As of Wednesday "many products and materials could no longer be exported," Li Hui, general manager at Shanghai Huirui Biotechnology Co, which exports test kits, told the Global Times on Wednesday, adding that many companies are waiting for newly required certificates from Chinese regulators.

Following recent media reports about quality issues with certain Chinese medical products, foreign and domestic regulators have tightened their grip on the trade of these supplies. To ensure the quality of exported supplies, China as of Wednesday required all medical products to obtain a certificate from Chinese regulators before they could be exported, according to a statement released by the Chinese National Medical Products Administration (NMPA) on Tuesday.

Previously, Chinese companies could export such products if they had the appropriate foreign certificates, such as those from the US Food and Drug Administration or the EU, which issues CE certificates. However, those certificates were being handled by third-party agencies, many of which were providing fake certificates, allowing the export of substandard products. The number of such agents has surged into the thousands, compared with less than 100 in normal times, an industry insider told the Global Times.

Lapses by foreign regulators in light of surging demand for the products also allowed increases in these fake certificates, as some were exported without being verified. For example, the EU relaxed restrictions on such imports and approved shipments before they even gained the certificates.

"The EU side doesn't care whether an exporter has a medical device registration in its own country. You can get a CE certificate for medical use if your products can pass their testing," the manager of a mask producer in Jinan, East China's Shandong Province told the Global Times on Wednesday.

China's new rules allow its regulators to weed out products approved by fake agents and could help address foreign concerns over the quality of Chinese-made medical products, industry insiders said.

However, that means that many companies that have already been exporting medical supplies will no longer be able to do so, and applying for additional documents could take weeks or even months, several business and industry insiders told the Global Times on Wednesday.

"A qualified mask producer should obtain two certificates: One is for export and the other is the mask registration certificate granted by the NMPA. Most exporters do not have the latter," said Li Lin, general manager of Anhui Fumei Medical Company.

According to Li, in East China's Anhui Province, where his firm is based, only eight manufactures have gained the mask registration certificate, with a daily output of 3 million units. "This is far below the actual export volume," Li noted. His company, which is one of the eight ventures that had been awarded with the NMPA certificate, manufactures about 300,000 masks a day.

As of Tuesday, the NMPA had issued certificates for 1,426 masks, 23 test kits, 42 ventilators, 236 infrared thermometers, and 301 protective gowns, according to a list the agency released. Industry insiders believe that these numbers are significantly lower than those involving current exporters.

Apart from China's new rules, there have also been media reports of some foreign governments tightening regulations on Chinese-made medical supplies or facing rising calls to do so, including the US, where regulators have reportedly banned the import of certain types of Chinese-made medical masks.

Commenting on the US' move during a routine press briefing on Wednesday, Hua Chunying, a spokesperson for the Chinese Foreign Ministry, said that while there are issues with discrepancies among countries' regulations and standards for the products, "these issues should not become the hurdle for cooperation on products and materials for fighting the epidemic."

The discrepancies have shut the door on many Chinese companies that have been in the export businesses for years. Beijing Xidebao Sterilization Product Co has been seeking ways to export its disinfection products "but we have not found the right path so far," Chen Huijun, its general manager, told the Global Times.

Other companies are avoiding the export route, even if it seems to be open, because they fear huge fines from foreign regulators in light of tightening rules. "[They] could settle accounts with [us] afterward," Jin Xiaobo, CEO of Zhejiang Kaierhai Textile Garments Co, told the Global Times.

This chilling effect on Chinese companies stems from the recent incidents where some small quality issues and misunderstandings have been politicized into attacks on China, industry analysts said.