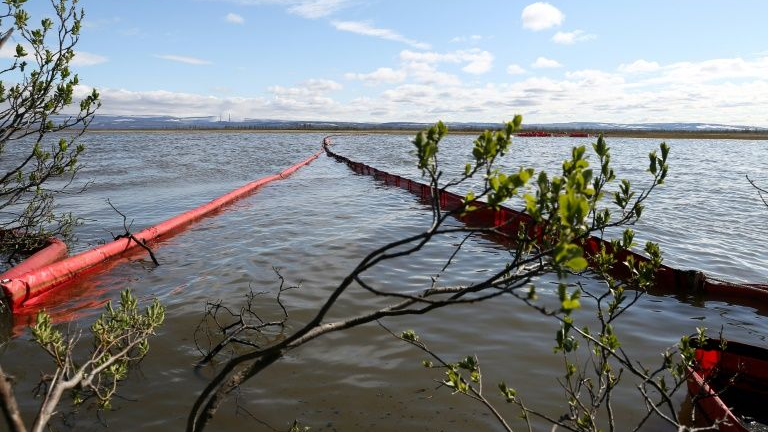 Floating dams are seen installed to contain the spread of fuel spilled into a river outside Norilsk, Russia, June 6, 2020. (Photo: AFP)

The United States stands ready to help Russia in cleaning up the diesel oil leak in Norilsk and to offer technical expertise, US Secretary of State Mike Pompeo wrote on his Twitter page on Saturday.

"Saddened to hear about the fuel spill in Norilsk, Russia," Pompeo wrote on his Twitter, adding that despite their disagreements, the United States stood ready to assist Russia to mitigate this environmental disaster and offered their technical expert.

The US Department of State and White House have not yet replied about the form of their assistance.

Over 21,000 tons of diesel were leaked into the Arctic Ocean on May 29 that marks one of the largest oil spills in Russian history.

The spill, deemed the worst ecological catastrophe of the sort to ever hit the region, colored remote tundra waterways with bright red patches visible from space.

Russian President Vladimir Putin on Wednesday declared an emergency and said he expects the company responsible for the accident is to pay for the clean up, which could take years.

Over 100 specialists have been dispatched to the area by the Russian emergency services, as well as equipment and experts from the state oil corporations.

Around 500 people and 70 vehicles have been engaged to clean up the area. They managed to contain the spread of oil and localize the spill up to now.

Clean up work however has been complicated by marshy ground amid a springtime thaw and the shallow depths of the nearby Ambarnaya River, which prevents boats from reaching the scene.

Russian officials said Friday that the spill was probably caused when long-frozen permafrost under the fuel tanks' base melted and gave way, and they ordered a review of infrastructure in vulnerable zones.