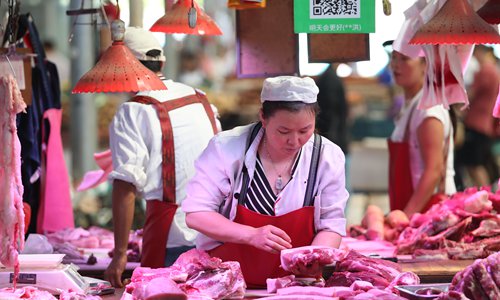 Chinese vendors sell pork at their stalls in a market in Kunming, Southwest China's Yunnan Province, in June. (Photo: IC)

Pork imports by China surged in the first three quarters of 2019, which an expert said was partly due to a rush by many domestic companies to make a profit.

Imports stood at 1.33 million tons of pork from January to September, up 43.6 percent year-on-year, data from the General Administration of Customs showed on Monday.

China's live hog price was 34.4 yuan ($4.85) per kilogram in the first 10 days of October, up 4.8 percent from the previous 10 days and up 16.2 percent year-on-year, data from the National Bureau of Statistics showed on Monday.

As domestic pork prices are two to three times as high as the prices of imported pork, domestic state-owned and private companies are starting or expanding pork imports to reap high profit, Ma Wenfeng, a senior analyst at Beijing Orient Agribusiness Consultancy, told the Global Times on Monday.

Su Wei, a deputy secretary general of the National Development and Reform Commission (NDRC), the country's economic planner, told reporters on Monday that the commission has taken steps to guarantee pork supplies and stabilize prices, while also supporting the production of live hogs.

"The NDRC and relevant departments are closely watching pork price changes. We will announce new measures to stabilize pork prices if needed," he said.

Many domestic companies have resumed production of live hogs, which will be on sale after the 2020 Spring Festival, Ma said, adding that pork prices are likely to remain high for the rest of this year.

Deputy Minister of Agriculture and Rural Affairs Yu Kangzhen said in July that 1.16 million pigs had been slaughtered in China since outbreaks of African swine fever began in August 2018.

Before the National Day holidays from October 1-7, China released 30,000 tons of pork from the national reserve in three batches to relieve pressure on supplies.