BUSINESS Pork prices up 85.7% in July year on year 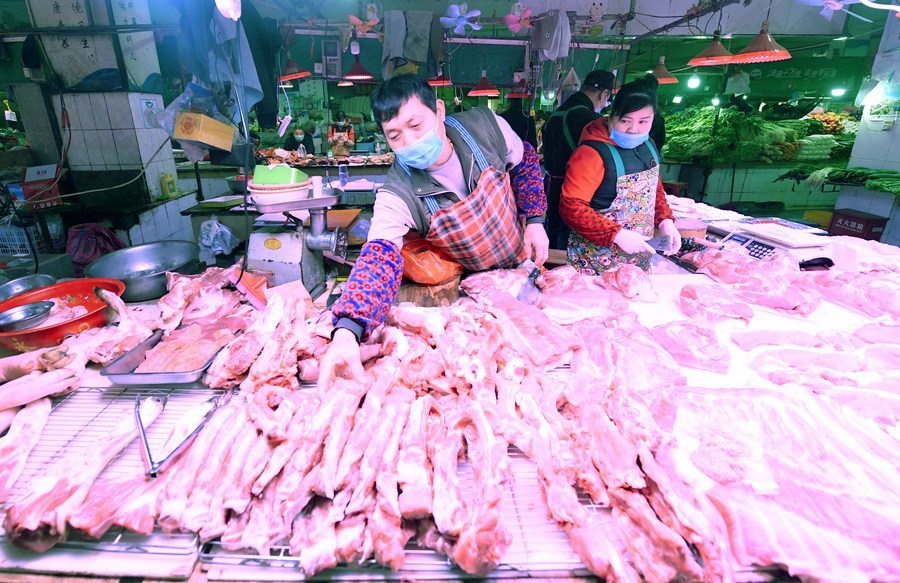 Average pork prices in China rose from 45.98 yuan (around $6.61) per kg on May 27 to 55.5 yuan per kg on July 29, according to the fixed-point monitoring of markets in 500 counties nationwide by the Bureau of Animal Husbandry and Veterinary Services of the Ministry of Agriculture and Rural Affairs (MARA).

"The money I used to spend on 1.5 kg of pork before, now only gets me 1 kg," said a resident from the city of Qinhuangdao, Hebei province.

Growing pork prices have largely pushed up food prices, which remain the main driving force of consumer price index (CPI) — the main barometer for inflation — in July. Compared with the same month last year, CPI in China grew 2.7%, up 0.2 percentage points from the previous month, according to data from the National Bureau of Statistics.

Industry insiders believe two main reasons contributed to the price rise. One was the increasing demand from the recovering catering industry now that the COVID-19 pandemic has been basically brought under control domestically and the tight supplies due to the wait-and-see attitude of pig farmers. The other was the disruption of supplies and transport caused by the recent spate of bad weather, especially in southern China.

However, despite the overall tightly balanced supply-demand in China's pig industry, there are still many favorable factors helping stabilize production and ensure supply.

Data shows that the current stock of live pigs and supply of piglets have registered growth for five consecutive months. This indicates that the number of commodity hogs which can go to market will gradually increase after July and therefore the supply of pork will continue to rise.

Guo Liyan, researcher with the Department of Market and Price Studies at the Academy of Macroeconomic Research, noted that the rise in pig prices has meant that farmers are willing to raise more hogs. "As the flood season gradually comes to an end, its impact on pork prices will fall off," Guo added.