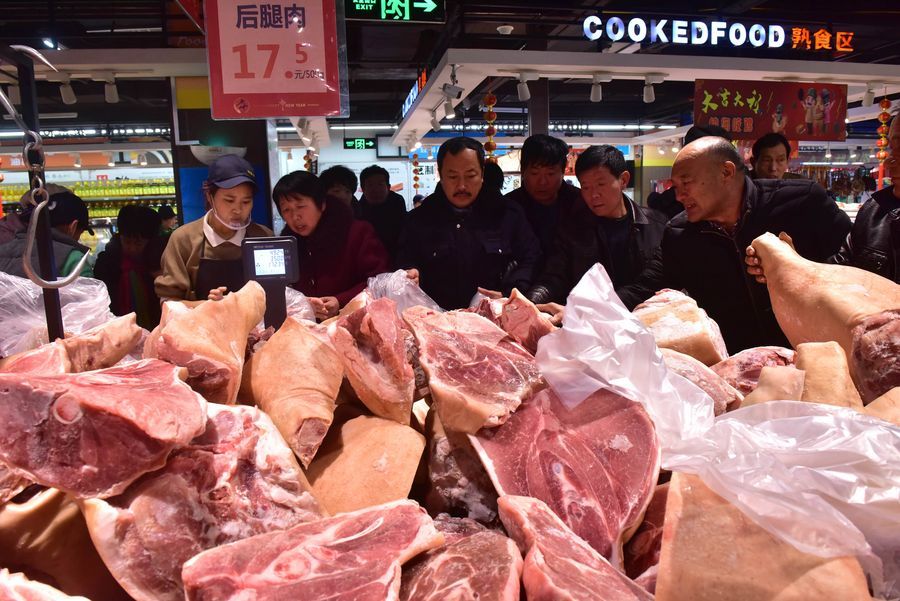 China's pork prices, which jumped in June and edged up in July, will continue to rise in coming months due to seasonal factors and the influence of COVID-19. But tight supplies will begin to ease in the fourth quarter thanks to more progress in boosting hog production and the expansion of imports, authorities said.

Wholesale pork prices have followed a V-shaped trajectory this year－sliding from February through the end of May and beginning to rebound in June, the Ministry of Agriculture and Rural Affairs' department of market and information technology said in an article released on its website.

As of the week of July 20 to 26, wholesale pork prices had been rising for eight consecutive weeks and reached nearly 49 yuan ($7.05) a kilogram, more than double the same period last year and nearing the high of 50.5 yuan per kilogram in mid-February, the ministry said.

Since mid-July, the growth rate has contracted, and wholesale prices saw their first recent week-on-week decline in the past week while still representing a major jump from the same period last year.

Demand on way up

The ministry said that the drop that ended in May had been due to increasing hog herds and languishing consumption during the height of the pandemic. But since June, with more eateries, factories and schools reopening, prices were buoyed.

"With the coming of the peak shopping season for pork products, which usually begins in the second half of the year, we will continue to see seasonal price increases," the article said. "This year, demand will be further spurred following the mitigation of the coronavirus, adding pressure to price inflation in the future.

"However, it is estimated that imports of pork and poultry will each rise by 1 million metric tons from a year ago, and hog production is recovering. Thus, overall meat supplies are secured," it said.

China has taken many measures to revive pig farming, which was stricken by outbreaks of African swine fever starting in August 2018. The contagious disease is fatal to pigs but not harmful to humans.

The country reported 162 outbreaks as of the end of last year and culled nearly 1.2 million pigs as a result, the ministry said.

The disease's spread showed signs of slowing early this year, with no new outbreaks reported in January and February. Since March, though, over a dozen outbreaks have been reported, prompting the ministry to begin a 60-day campaign in April to crack down on illegal shipments of sick live hogs, blamed for causing most recent infections.

Adding to the headwinds is that the pandemic constrained the operations of slaughterhouses and pig feed and veterinary drug producers, as well as hampering construction of new pig farms.

But the impact has been limited and will not disrupt the industry's pace of recovery, said Yang Zhenhai, chief of the ministry's animal husbandry and veterinary bureau. "Given the growing output of hog and piglet herds in recent months, more commodity pigs will soon be released to the market," he said at a news conference on June 13.

"Our analysis shows that shortages will be relieved gradually after the third quarter. With sufficient supplies, pork prices in the second half of this year will not rise in a consistent and dramatic manner," Yang said.

The ministry said the inventory of breeding sows in June registered its first year-on-year increase since the onset of the animal disease outbreak, marking "a significant turning point". Breeding sow stocks started climbing since October. The number in June rose by 3.6 percent over the same period last year and jumped by 28.6 percent compared with September.

Meanwhile, more than 6,100 pig farms were built in the year's first half, and nearly 10,800 large-scale pig farms that had been idled last year restarted operations. Consistent increases in piglets and boars also portend rapid increases in stocks.

Xin Guochang, an official with the ministry's animal husbandry and veterinary bureau, said that by June, 15 provincial-level regions had recovered at least 85 percent of the sow herd stocks that existed before the African swine fever struck, and 13 provincial regions had restored 80 percent of their previous hog herd numbers.

Pork imports from January to June had soared by 150 percent to over 2.07 million metric tons compared to the same period last year.

Despite the positive outlook, the country still faces challenges in returning to normal hog levels.

Both the number of pigs slaughtered and total pork output in the year's first half dropped by about 20 percent year-on-year, though the rate of decrease compared to the first quarter is slowing, the bureau said.

Yuan Longjiang, head of the Institute of Agricultural Economics and Development at the Chinese Academy of Agriculture Sciences, said that while the African swine fever epidemic is forecast to take a smaller toll on pig farming this year, a modeling study forecasts the pandemic will shrink pork output by 2 percentage points for 2020-2022.

The supply gap could be plugged through higher imports. Tariff rates for frozen pork were cut to 8 percent from 12 percent starting on Jan 1. "Total pork imports this year might approach 4 million tons," he said.