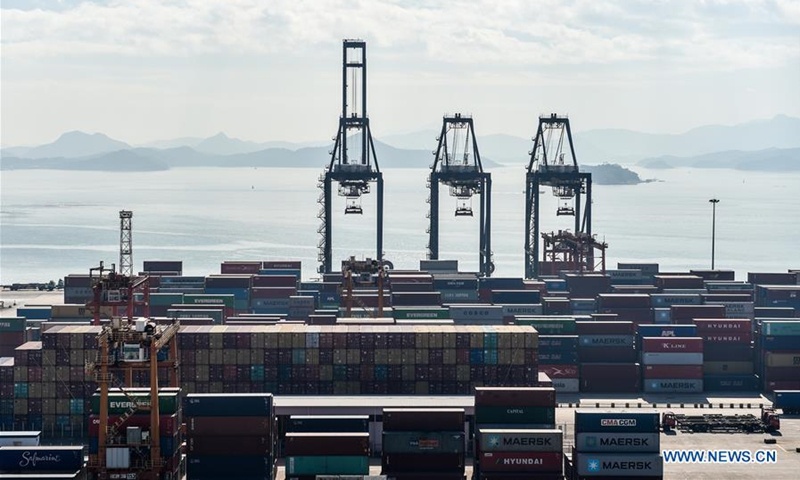 Shipping backlogs at Yantian Port in Shenzhen, South China's Guangdong Province have forced many carriers to divert vessels to other ports in southern China, leading to greater uncertainties in the shipping industry ahead of its coming peak season as the global economic recovery accelerates.

As of Monday, the port, which handles one-third of Guangdong's foreign trade and one-quarter of China's exports to the US, said that it has resumed 70 percent of its overall handling capacity and is expected to return to normal by the end of June, according to media reports.

However, even though more workers return to their jobs and more berths reopen at Yantian, the shipping backlogs at the port have put pressure on other ports, including Shekou and Chiwan in Shenzhen, Nansha in Guangzhou and Hong Kong.

The Guangzhou port terminal of Nansha has handled 38 additional ships in order to ensure the unimpeded flow of foreign trade, the port told the Global Times in a statement on Monday.

"As a result, the container terminal has become busier, resulting in pressure on the port's operations as well as congestion on some roads entering the port. Shipments are piling up at Nansha's second phase, and its productivity is down by 20 percent," the statement said.

Before the ripple effect from the backlogs at Yantian, major ports in southern China had already been working around-the-clock since late May due to the impact of the COVID-19 flare-ups in Guangdong and the lagging effects of the Ever Given containership being stuck in the Suez Canal in March. Container yards are packed, and trailers and barges are working slowly.

According to Oneshipping, a Chinese logistics information provider, more than 300 voyages have been canceled, shifted to other routes or diverted to other ports.

Following the latest announcement from Yantian Port, global shipping giant Maersk told the Global Times on Monday that "the situation will soon be improved and the backlog will be gradually cleared in the next few weeks."

"Yantian is one of the most important gateway hubs globally, and the ripple effect of the partial closure of the port has led to congestion in nearby ports, such as Nansha, Shekou and Hong Kong. To mitigate further these impacts, Maersk is constantly evaluating the situation and considering contingencies in these ports," Maersk said.

The backlogs have pushed up global shipping rates.

According to Zhong Zhechao, founder and CEO of Oneshipping, ocean carriers from Asia to Europe cost $20,000 per 40-foot container, a jump of about 1,000 percent from a year ago. The cost of sending such a container to the US has skyrocketed to nearly $17,000.

"The backlogs of goods in the southern Chinese ports are very severe, with old shipments still waiting as new ones keep arriving. The ports of Shekou and Nansha are already running at full capacity," Zhong told the Global Times on Monday, warning the consequences of shipping backlogs at southern Chinese ports would be more severe than the Suez Canal congestion.

Zhong expressed concern that the coming peak season of August and September will cause further complications for the whole shipping industry.

"I am pessimistic about the global shipping sector in the second half, if it recovers slowly. That may threaten retail inventories in the US and Europe as stores are preparing for Christmas," he said.