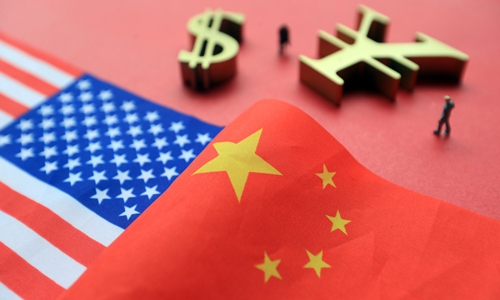 The implementation of the China-US phase one trade deal may be put off this year as the US battles the spreading coronavirus and the country's agriculture sector may face a delivery problem, experts said.
The US government will not give much attention to the implementation of the phase one trade deal because its focus has completely shifted to curbing the coronavirus pandemic, and eliminating the virus' increasing threat to its security, Wang Xiaosong, an economics professor at the Renmin University, based in Beijing, told the Global Times on Saturday.
"Nobody cares about trade" amid the pandemic, the US President Donald Trump was quoted as saying in a daily briefing at the White House on Friday.
"I must tell you this whole invisible enemy has taken over the world," Trump said. "It's hard to talk about 'hey how you doing with buying from the farmers'."
The US has reported 100,000 infected cases and more than 1,600 deaths now. The caseload is higher than any other single country's reported cases, and the Trump administration is under rising criticism for its woeful preparation work and ineffective measures to blunt the virus.
"The spreading pandemic has become the US' most potent security hazard. National security is of the most significance, over-pacing other priorities," Wang said.
The spread of the coronavirus and related economic uncertainty is threatening the US in many ways, and the encroaching deadly virus is dealing a heavy blow to the struggling US agricultural sector, which is among the major sectors in the phase one trade deal with China, the Wall Street Journal reported last week.
The spreading pandemic has driven down crop and livestock prices and threatened labor shortages for US farms, the report said.
Despite a mighty hit China's economy suffered from the coronavirus in the first quarter, China has maintained it will try its best to implement the phase one trade deal, under which China has committed to increase purchases of US farm, energy and manufacturing products by $200 billion over the next two years.
"As the trade deal has taken effect, we will implement it, unless there is mounting evidence that the US side can't deliver," Gao Lingyun, an expert at the Chinese Academy of Social Sciences who advises the Chinese government over trade issues, told the Global Times on Saturday.