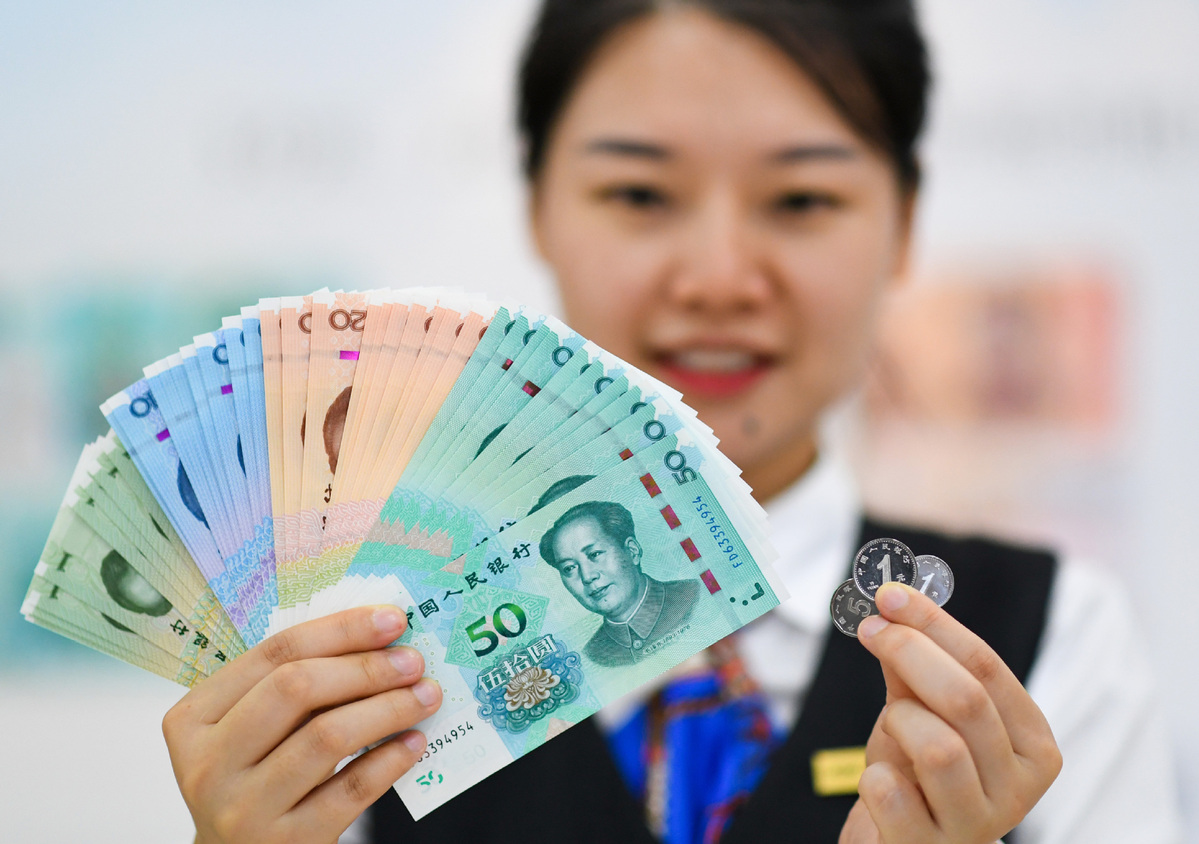 A woman shows banknotes and coins included in the 2019 edition of the fifth series of the renminbi. (Photo: Xinhua)

China signaled a likely reduction in the reserve requirement ratio for banks to enhance their ability to expand credit for the purpose of supporting economic recovery and stabilizing market confidence, experts said.

Monetary policy tools such as RRR cuts could be used when needed and as appropriate to keep liquidity reasonably ample, according to the decision made at a State Council executive meeting on Tuesday. The State Council is the nation's Cabinet.

The decision was triggered by several factors, including the economic recovery pressure China is facing due to sporadic outbreaks of COVID-19, the narrowing of banks' net interest margins, and demand for long-term liquidity to stabilize the housing market, said Lou Feipeng, a senior economist at Postal Savings Bank of China.

Lou said the People's Bank of China, the central bank, may cut the RRR for all banks by 0.25 percentage points. The reduction in the cash amount banks must hold in reserve is expected to free up about 550 billion yuan ($77 billion) in long-term liquidity.

"Using RRR cuts, China will not only encourage banks to step up support for the real economy, but also lower their borrowing costs, thus helping banks to surrender part of their profits to support the real economy. The long-term funds freed by the reduction is also conducive for banks to provide long-term financing for the economy," he said.

Wang Yunjin, senior researcher at the Zhixin Investment Research Institute, said COVID-19 cases have resurged in a number of Chinese cities this month, and this has affected the recovery of the real economy to some extent.

"As demand is still insufficient and market sentiment is unstable, it is necessary for China to take measures like cutting the RRR to send a positive signal for the economy, boost financial market confidence, maintain market stability, and create a favorable financial environment for economic stabilization and recovery," Wang said.

Currently, market liquidity has marginally tightened and needs to be further loosened. The country expedited issuances of local government special bonds in October and November. With the accelerated implementation of infrastructure investment projects, demand for supporting financing will increase. In addition, the loosening of a series of real estate policies also signifies that the banking system needs to maintain sufficient liquidity, he said.

Considering that major developed countries are still raising their interest rates, there is relatively little room for China to push for a decrease in market interest rates by cutting policy rates. Therefore, lowering the RRR is a more suitable choice among monetary policy instruments, compared with policy rate moves, he said.

At the end of September, the gap between the balance of bank deposits and the balance of bank loans noticeably widened compared with that at the end of last year, said a PBOC report. Moreover, net interest margins of commercial banks have narrowed significantly since China cut its one-year loan prime rate, the benchmark lending rate, in December 2021. These factors led to a slowdown in banks' profit growth, said Chang Huili, an analyst at Huatai Securities, in a report.

An RRR cut will contribute to the reduction of banks' borrowing costs. The move is conducive to improving banks' credit expansion capability and increasing their willingness to do so, Chang said.