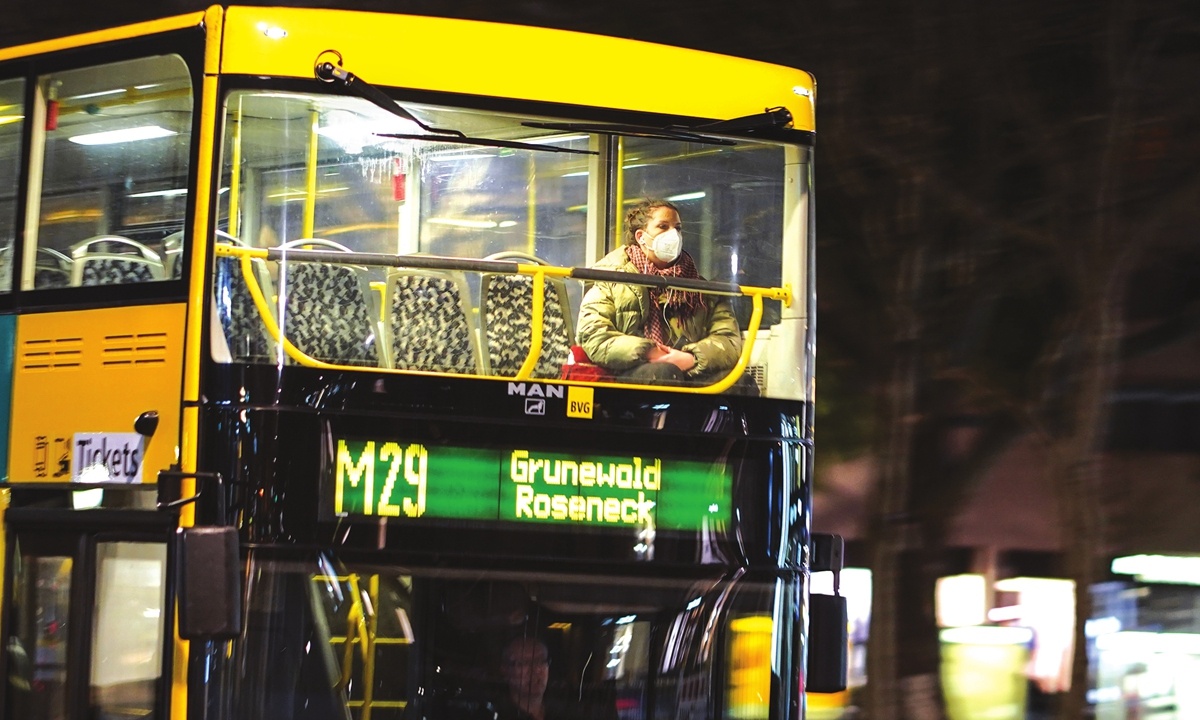 A woman wearing a mask rides a bus in Berlin, Germany. (Photo: Xinhua)

As veteran German leader Angela Merkel plans to step down in a few weeks, the future of the massive China-Germany economic and trade relationship could enter a period of uncertainty with very different views and rhetoric coming out from German politicians about the direction of Berlin's China policies.

Recent reports of tough remarks about China's economy from the leading candidate to succeed Merkel and other German officials have added to the uncertainty.

While tough rhetoric from certain German politicians is expected, given tensions between China and the US-led allied countries, overall economic and trade cooperation is likely to continue to expand, even if there will be disruptions in certain specific areas and projects, Chinese analysts noted.

Germany's largely independent policy on Chinese 5G technology will be in focus to gauge the direction of bilateral economic and trade ties, the analysts said.

In what could be a closely watched signal of Germany's stance toward China after Merkel's departure, chancellor candidate Armin Laschet and other German officials plan to warn of China's growing influence on the global economy and call for a strategic alliance with the US in a series of articles this week, according to German newspaper Handelsblatt.

In the articles, the German politicians also urged Europe and the US to lead in digitization and agree on standards for new technologies, while describing China as a "negotiating partner, competitor and a systemic rival," said Handelsblatt's report, which was published in German.

If the articles are published as reported, it would be a clear change in stance for Laschet, who said as recently as June that he supported "the (Merkel) government's China strategy" and that "there is no need to turn our China policy on its head."

Chinese analysts said that uncertainty is rising not just for China-Germany ties but also China-EU relations after the departure of Merkel, who has been a crucial stabilizing force in both relationships.

"There could be some changes [in bilateral relations] after Merkel, and China needs to be prepared," Chen Fengying, a research fellow at the China Institutes of Contemporary International Relations, told the Global Times on Tuesday, noting that political disputes will likely increasingly complicate economic and trade issues.

However, "regardless of the political confrontation, there is no way for Europe and the US to completely decouple from China," as cooperation in industry chains is impossible to undo, Chen added.

Germany's economic and trade ties with China are even stronger than those of the EU as a whole and will be even more impossible to shake, Chinese analysts noted.

"From carmakers to new energy, potential for China-Germany cooperation is very big and [Germany's interests] in the Chinese market are also the largest," Ma Jihua, a telecommunications industry veteran analyst, told the Global Times on Tuesday, adding that Germany has a huge interest in pursuing cooperation with China.

Under pressure from Washington, which has been trying relentlessly to crack down on China's leading 5G technology, many US allies have been cautious on importing equipment from Chinese telecommunications giant Huawei. However, Germany has maintained a relatively independent approach, as it has refrained from banning Huawei's technology.

Whether Germany will change that approach after Merkel's departure would be a key gauge of the direction of the country's policy toward China under a new chancellorship, analysts noted. However, while uncertainties remain and critical rhetoric about China is unlikely to stop, analysts believe that there won't be a fundamental shift in economic and trade policies toward China, including in 5G.

"Germany has an Industry 4.0 vision and has a more urgent need to build its 5G and other infrastructure than other European countries… that need won't change because of the change in leadership," Ma said, adding that Huawei is Germany's most ideal partner.