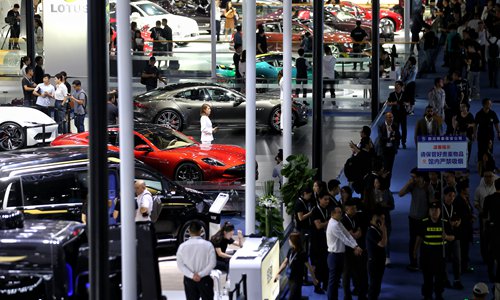 Consumers walk in an exhibition hall of the Chengdu Motor Show 2019 on September 5. (Photo: IC)

Although China's auto market has been stuck in a sales slump for more than a year, sales of premium vehicles - mostly from foreign brands - saw significant growth in September in what analysts said showed consumption upgrading and improving sentiment about the world's second-largest economy.

Sweden-based Volvo achieved year-on-year growth of 13 percent in September in China, the company's largest monthly expansion in the market, according to media reports.

Mei Songlin, a senior auto industry analyst based in Shanghai, attributed the gains to sound holiday demand and low base numbers in September last year.

"The demand for high-end models in China is still relatively strong, despite the overall slump," Mei told the Global Times on Tuesday. "I think that it's all part of what we have been discussing so frequently - the consumption upgrade among Chinese consumers."

Though demand for premium cars remains high, broad car demand in the Chinese market has been declining for more than a year. In August, total sales dropped by 9.9 percent year-on-year to 1.56 million units, according to data from the China Passenger Car Association in September.

The decline in auto sales, a major driver of consumption, has been described as a symptom of persistent downward pressure on the Chinese economy. "Demand for cars has been somewhat contained by declining sentiment over the Chinese economy," Mei said.

As part of a broad effort to curb the slowing pressure, Chinese policymakers have moved to boost consumption and vehicles have been one of the main areas of focus. In early September, the State Council, China's cabinet, released a directive to boost consumption, including suggesting that local authorities ease restrictions on car purchases to support auto sales.

Following the directive, some cities, including Shenzhen and Guangzhou, have eased or ended restrictions, Ning Jizhe, vice chairman of the National Development and Reform Commission and head of the National Bureau of Statistics, said in late September.

Better financing options may have also encouraged consumers to purchase cars, according to Mei. "You could say people are more comfortable buying a car than before," he said.