BUSINESS Pressure on exporters could mount in 2nd half

Pressure on exporters could mount in 2nd half 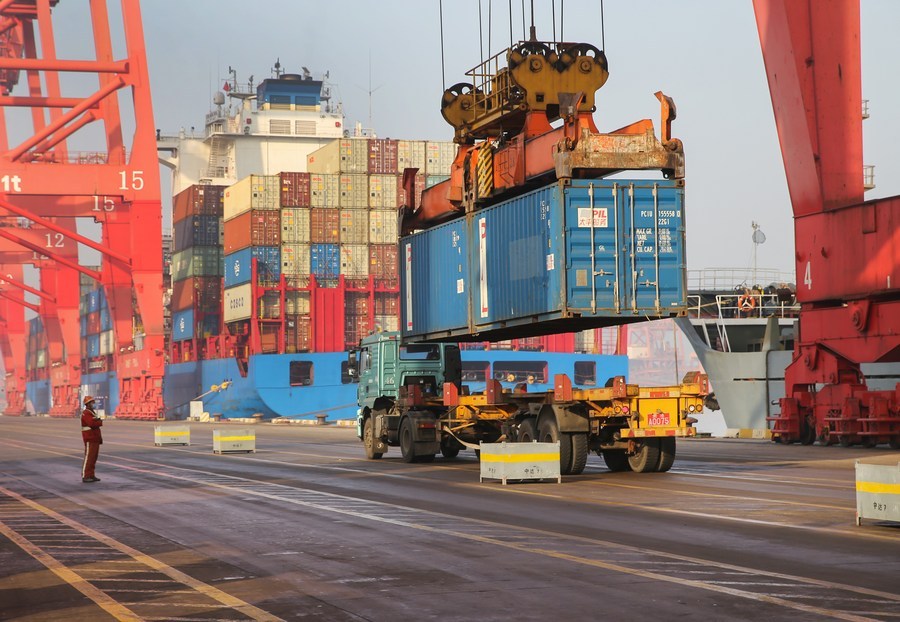 Cargos are unloaded from a container ship at the container terminal of the Lianyungang Port in East China's Jiangsu province, on Jan 14, 2021. (Photo: Xinhua)

Chinese foreign trade enterprises may face surging pressure in the second half of this year, due to increasing commodity prices, skyrocketing shipping costs and a fluctuating foreign exchange rate, industry experts said.

"The pressure will probably emerge in June," said Qiu Zhiming, chairman of Beifa Group, a leading stationery and office supplies manufacturer based in Ningbo, Zhejiang province. The company's exports, which reach nearly 200 countries and regions, account for 16.5 percent of Chinese pen exports.

"The rising commodity prices and increasing shipping costs both weigh down on enterprises," Qiu said. "Meanwhile, since many overseas manufacturers began to resume production earlier this year, the competition is also increasing."

Prices of key commodities and industrial components increased between January and April. For example, the price of iron ore was up 58.8 percent compared with the same period last year, the price of copper rose 29.8 percent, and that of integrated circuits increased 18.9 percent, according to the General Administration of Customs data.

In addition, the cost of some shipping lanes saw a threefold to sixfold increase. For instance, the shipping cost of a container from Ningbo to New York skyrocketed, from $2,500 to almost $12,000, according to industry statistics.

According to Guan Tao, global chief economist of BOC International (China) Co Ltd, the two-way volatility of the exchange rate will continue this year, amid changing dynamics and a mix of factors.

Though China's foreign trade surged 28.5 percent year-on-year in the first four months of 2021, manufacturers are a bit conservative in their prospects for the rest of the year, and many of them could run out of raw materials soon.

Some manufacturers have gradually increased the sale price of their products, and more are strengthening their efforts to explore the domestic market.

Beifa, for instance, aims to boost its home market share to 20 percent this year, though its exports grew in 2020, and the company's export value grew 130 percent year-on-year in the first quarter.

"We will do more in exploring cross-border e-commerce this year, building overseas warehouses and providing customized services to foreign consumers," Beifa chairman Qiu said. All these efforts aim to diversify risks, he added.

Several kilometers away from Beifa Group's headquarters in Ningbo, employees at a plant owned by Aux Group are busy assembling residential air conditioners ordered by clients in the United Arab Emirates. The company's products are exported to more than 100 countries and regions.

Deng Jun, executive vice-president of Aux Group, said, "The rising prices of aluminum, copper and steel (iron ore) have forced us and the whole industry to raise product prices."

The prices of refrigerators, televisions and washing machines have gone up in the domestic and global markets this year, Deng said, and there will be more price hikes in the air conditioning industry in the second half of the year.

Because the pandemic compelled more people to stay at home across the world last year, Aux Group managed single-digit growth in exports in 2020. It saw more than 20 percent growth in the first quarter of this year and aims to ship up to 8 million air conditioners abroad in each of the next two years.

Deng said the company, in addition to expanding sales networks in its traditional markets, including the Middle East and Europe, will seize opportunities in the Southeast Asian market, supported by its manufacturing bases in Thailand and Indonesia. This will be possible due to favorable tariff policies under the framework of the Regional Comprehensive Economic Partnership agreement, he said.

Jin Hai, director-general of the General Administration of Customs' department of general operations, said that once the pact takes effect, market access will be expanded and investment hurdles mitigated.

Liu Yuanchun, vice-president of Renmin University of China, said that even though many countries are rebuilding their supply chains amid a continuing economic recovery, it will take them a long time to do so.

"Meanwhile, the rise of global commodity prices will not be a long-term trend," he said, emphasizing that the growth of China's exports will be sustained this year.

"The key issue is to strengthen the competitiveness of Chinese products through technology innovation," Liu added.