BUSINESS Priority is for HK to maintain sound business climate

Priority is for HK to maintain sound business climate 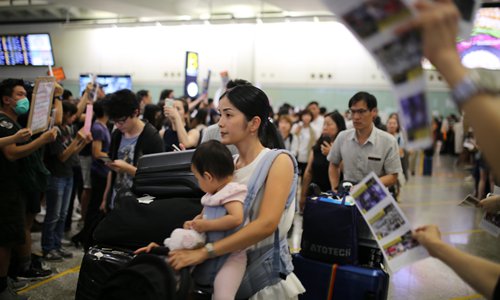 Social unrest in Hong Kong has had a negative impact on its international image and it is a priority for the global financial hub to maintain a sound business environment to prevent the local finance industry from facing more risks given the complicated global economic climate, a Chinese official said on Monday.

"So far we have noticed that Hong Kong has kept a sound business environment… but the recent radical violence has already had a serious impact on Hong Kong's social order and international image," said Xu Luying, spokesperson of the Hong Kong and Macao Affairs Office of the State Council, China's cabinet.

The Hong Kong Retail Management Association has said that most of its members have seen a significant decline in sales in the past month, Xu told a press conference in Beijing.

Data released by the City University of Hong Kong showed that the city's consumer confidence index has fallen to the lowest point in five years. Also, the local tourism industry said that the number of tour groups from Southeast Asia countries has decreased recently and is expected to drop by more than 70 percent.

Some tourists from the Chinese mainland have postponed their travel plans to Hong Kong, as there have been protests every weekend lately.

"This is only part of the situation, which needs deep thought and vigilance from the Hong Kong community," Xu noted. There has not been an obvious impact on Hong Kong's financial industry so far, Xu said. "But if it's business environment becomes worse and business confidence declines under the complicated global economic climate, the finance sector of Hong Kong, an outward-oriented small economy, will face more external risks."

It is Hong Kong's top priority to punish violence in accordance with the law, restore social order as soon as possible and maintain a good business environment, Xu said.

The Chinese central government will continue to support Hong Kong in developing its economy, improving people's livelihoods and supporting its active integration into the overall development of the country, the spokesperson said.

In the process of building the Guangdong-Hong Kong-Macao Greater Bay Area, the central government will consider expanding the scope and impetus for Hong Kong's development and providing more growth opportunities for local residents, especially the young generation, Xu said.