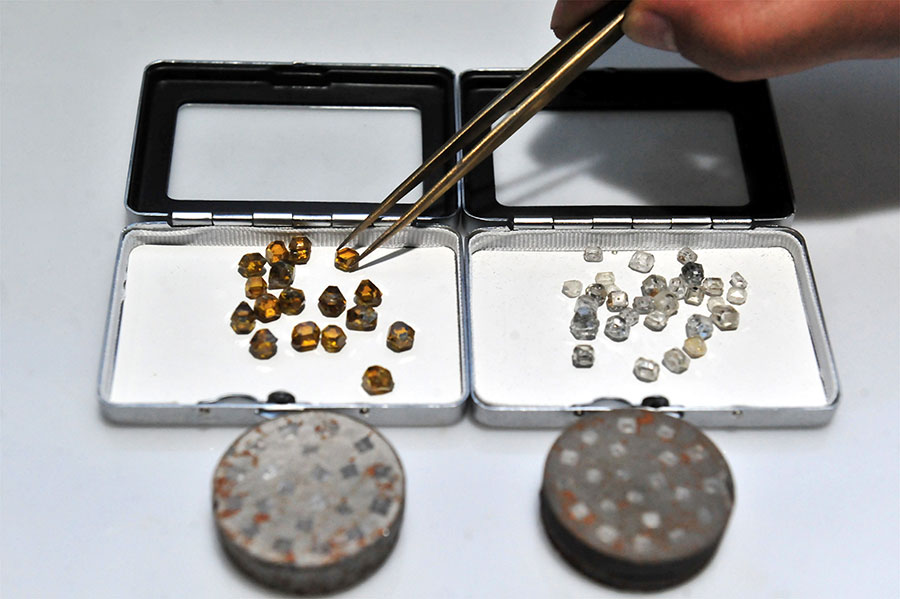 For someone wearing a $8,000 diamond ring, color, clarity, cut and carat are what make the gem stone valuable.

But for some labs that grow diamonds in China, these are not the most important properties. Instead, high electrical resistivity, heat conductivity and hardness are what count. At least, these are what potential clients such as Chinese semiconductor companies are banking on.

China's leading lab-grown diamond makers, whose combined production takes up about 90 percent of the world's total, are stepping up research efforts by cooperating with research institutions to develop lab-grown diamonds as semiconductor materials, experts said.

"Many leading lab-grown diamond producers in China are working to tackle technical problems in the field, such as the ability to make a p-n junction in diamond, with tech support from academies and institutes," said Zhang Zengqi, secretary head of Shandong Mining Association.

A p-n junction is an interface between two types of semiconductor material.

Zhengzhou Sino-Crystal Diamond Co Ltd has teamed up with the Academy of Opto-Electronics under the Chinese Academy of Sciences for a diamond semiconductor project.

The project is still at the research stage and the company is seeking further cooperation across fields. To date, Zhengzhou Sino-Crystal Diamond takes up about 14 percent of China's total market share.

According to Zhang, diamond can be an ideal semiconductor material.

"Its heat conductivity would allow for smaller power devices with the same capacity, compared with silicon," Zhang said.

In addition, the electrical field resistance of diamond is 30 times greater than that of silicon, which can suppress power conversion losses, according to Zhang.

Such characteristics make diamond the ultimate material for use in semiconductors for electronic devices, the key for social infrastructure such as power grids, railways, and electric vehicles.

"Although diamonds are nonconductive, they can be doped using phosphorus and boron to increase their electrical conductivity," Zhang said.

So if diamonds are such good semiconductors, why are they not used more widely?

Mined diamonds are too expensive to use, but lab-grown diamonds, whose production costs are about half those of mined diamonds, are an inexpensive alternative.

"Lab-grown diamonds are much cheaper than mined stones, it only takes five to eight days to make a 1-carat stone, and more importantly, they are in abundant supply - companies can produce as much as the world wants," said Tang Bin, deputy director at the Gem Appraisal Center of Peking University, China's leading institute that offers diamond grading services.

Today, 98 percent of industrial-grade diamonds are grown in labs instead of being mined, according to a report by IZO Diamonds.

Yet lab-grown diamond production is growing at 7 percent each year driven by demand in industrial applications. According to a Transparency Market Research report, the lab-grown diamond market is expected to reach $29.15 billion by 2025.

China has become the world's largest lab-grown diamond producing country with its production accounting for 90 percent of the world's total, according to a report by industry analysis website ifanr.com.

A report from Xinhua News Agency shows that China has been producing more than 10 billion carats of diamonds annually for almost a decade, with most used for industrial purposes.

"A more important factor that hinders the development of diamond as a semiconductor material, lies in the ability to make a p-n junction in diamond. Such technical problems are what major diamond labs are working on," Zhang said.