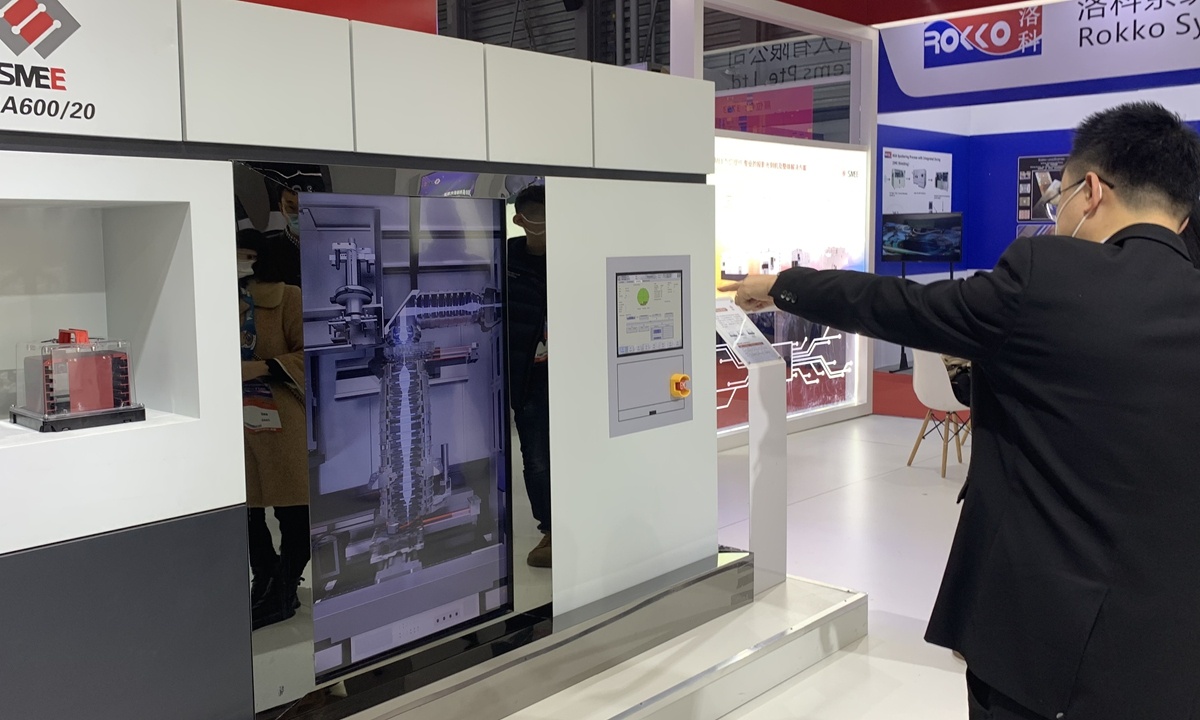 A global supply crunch and US sanctions on China's leading chipmakers have accelerated the localization of semiconductor industry, with more upstream and downstream firms looking more to the Chinese domestic market and ramping up efforts to break the bottleneck of advanced chipmaking, the Global Times learned at the SEMICON China 2021, a trade show in semiconductor industry.

At 9 am on Thursday, there were already long lines of visitors waiting to attend the show at the Shanghai New International Expo Center. Though it's a professional and technical event, public's passion was no less than for a popular auto show.

Many participants brought their suitcases to the venue and went directly to the exhibition booths, hoping to reach more deals and contracts with companies along the industry chain.

Under the impact of the COVID-19 pandemic and China's call to break the bottleneck of advanced chipmaking by trying to end its dependence on foreign companies, domestic chip manufacturers were in the spotlight at the show, compared with their foreign counterparts.

At the booth of NAURA Technology Group, a leading Chinese enterprise that makes integrated circuit high-end equipment, a screen showing the operating principle of an etching machine attracted many visitors. A staffer at NAURA said that the prepared publicity packets had been given out by noon, and visitors' passion for domestic semiconductor manufacturers was beyond their expectations.

"We bought plasma-etching equipment from NAURA at the exhibit due to its high-quality performance and cheap price. Only if we Chinese companies use domestic products, can Chinese chipmakers make improvements and innovations," Liang Yuhao, product engineer at Ningbo Chipex Semiconductor Co, told the Global Times on Thursday, adding that China's chipmaking localization is speeding up.

Due to booming demand, Liang said the company's orders this year doubled to more than 10,000 wafers per month compared with last year, so the company hired nearly more than 100 new staff.

At a booth of Shanghai Micro Electronics Equipment, crowds were seen taking pictures of a scanner machine model. The equipment is already able to produce 90-nanometer chips.

After seeing the US prevented Huawei from sourcing components including high-end chips last year, more and more Chinese companies have shifted focus to localization and independent research and development.

"China-US disputes in 2020, in tandem with the coronavirus pandemic, gave birth to an increasingly urgent strategic demand for the localization of China's semiconductor industry chain," Zhang Xin, senior vice president of operations and engineering at Semiconductor Manufacturing International Corp (SMIC), told the Global Times on Thursday.

The US crackdown has been a catalyst for the rapid growth of China's integrated circuit industry, said Zhang.

He added that SMIC welcomes cooperation with foreign suppliers but they shall not suppress the company or impose humiliating and unfair limits on it.

On Wednesday, SMIC announced plans for a joint venture with the Shenzhen government in South China's Guangdong to produce 28-nanometer chip wafers.

According to Handel Jones, CEO of International Business Strategies Inc at SEMICON China, the global semiconductor market will reach $1.1 trillion by 2030, and China will account for 60 percent.

"We used to provide raw materials mainly for Japanese semiconductor companies, but now as China is the world's largest buyer of semiconductors, we want to serve domestic wafer plants more to make the industry better and stronger," Li told the Global Times at the exhibition.