Progress in Qinghai-Tibet Railway the start of closer trade ties between China, Nepal 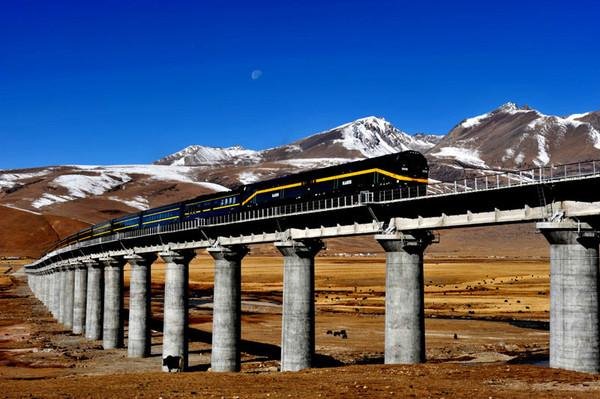 The HXN3 diesel-electric locomotives began to pull passenger and freight trains in 2014 on the railway line connecting Lhasa with Xigaze in Tibet, making their debut on the Qinghai-Tibetan plateau.

More than 80 percent of the Lhasa-Golmud section of the Qinghai-Tibet Railway is at an elevation of more than 4,000 meters. The highest point of the railway is 5,072 meters above sea level, making the Lhasa-Golmud route one of the world's highest plateau railways. The replacement of US locomotives means China has taken a further step in mastering core technology and internal innovation in operating a plateau railway. The trans-Himalayan railway connecting Tibet with Nepal is becoming more and more technically feasible with the experience of operating the Lhasa-Golmud rail line. According to media reports, China and Nepal have agreed to build a railway connecting Tibet with the Nepali capital Kathmandu, among a raft of deals signed during Nepali Prime Minister K.P. Sharma Oli's visit to China. A technical team from China has reportedly started a pre-feasibility study of the Nepal-China Himalayan railway.

For a long time, China and Nepal faced the problem of how to tame the Himalayas, which lie at the border area, to promote infrastructure interconnection. Although the two countries are close, friendly neighbors, most of their trade goes through the Bay of Bengal and is then routed through India. If China and Nepal are connected directly by rail, it will save time for importers and exporters and therefore increase bilateral trade. China has showed a willingness to work with Nepal to build a cross-Himalayan connectivity network through railways, aviation and roads. Technical progress in the infrastructure sector is a key point to achieving the goals.