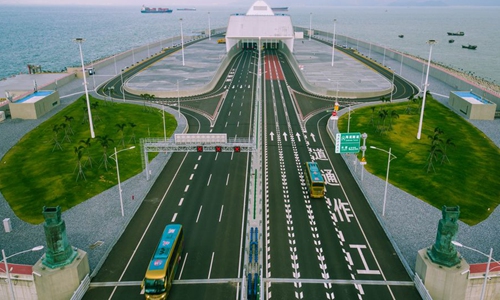 It has been announced that Hong Kong and Macao residents will enjoy the same rights as local residents when they purchase properties in nine Guangdong cities inside the Guangdong-Hong Kong-Macao Greater Bay Area. The new policy declared in November has stirred a heated debate in China.

This new policy can attract Hong Kong and Macao professionals, including accountants, doctors, engineers and other specialists from technology companies to work and settle on the mainland.

Some Hong Kong and Macao citizens who have already taken up a career on the mainland were earlier unable to buy houses on the mainland due to policy restrictions and had to commute between the mainland and their home every week. With this policy, they can now live a contented life on the mainland. Most people belonging to this group are well-educated, professionally competent and highly paid. They can not only introduce technology, wisdom and advanced production instruments to the mainland, but also enter the labor market right away, start production and consumption, and promote local economic growth. Even if such benefits can hardly be obvious in the short term, all local residents will enjoy the profits accrued as a result of economic development in the long run.

The two special administrative regions of China house a number of internationally renowned universities with a strong capacity for scientific research. The new policy can help attract outstanding Hong Kong and Macao students, augment the mainland's research and innovation capability and expand the international market, which can help build the Guangzhou-Shenzhen-Hong Kong and Guangzhou-Zhuhai-Macao science and technology innovation corridors.

In addition, high-end scientific and technological talents, as well as finance professionals from Hong Kong and Macao, are in great demand everywhere. To attract them to the Greater Bay Area, favorable policies and sops are far from enough. More importantly, we should create an increasing number of business opportunities and provide a favorable environment.

Precedents for attracting talents in such a way are not hard to find in the world. For instance, in Oresund, a border region connecting Denmark and Sweden through the Oresund Bridge, there are nine universities on both sides of the Oresund strait, with around 165,000 students and 12,000 researchers building connections and developing cooperation. A large number of research projects have been undertaken beyond regional boundaries with lower costs and better human resources.

Sweden has gained a new channel which leads straight to other European countries. Copenhagen Airport in Denmark, the busiest international airport in Nordic countries, also provides a more convenient choice for residents in Oresund. Meanwhile, Copenhagen citizens have obtained access to cheaper resources, especially more spacious and cozy housing, in its neighboring city Malmo. These conditions have led to the further development of scientific research cooperation between the two countries, making Oresund a research center in northern Europe. This has also attracted heavy European investment in high-tech projects.

Denmark and Sweden have developed their economies and technologies by attracting talents. China's new policy can also promote the integration of talents from various cities into a group of "Greater Bay Area." The move will not only benefit the exchange of personnel and logistics, but also further enhance the economic and technological development of the Greater Bay Area.