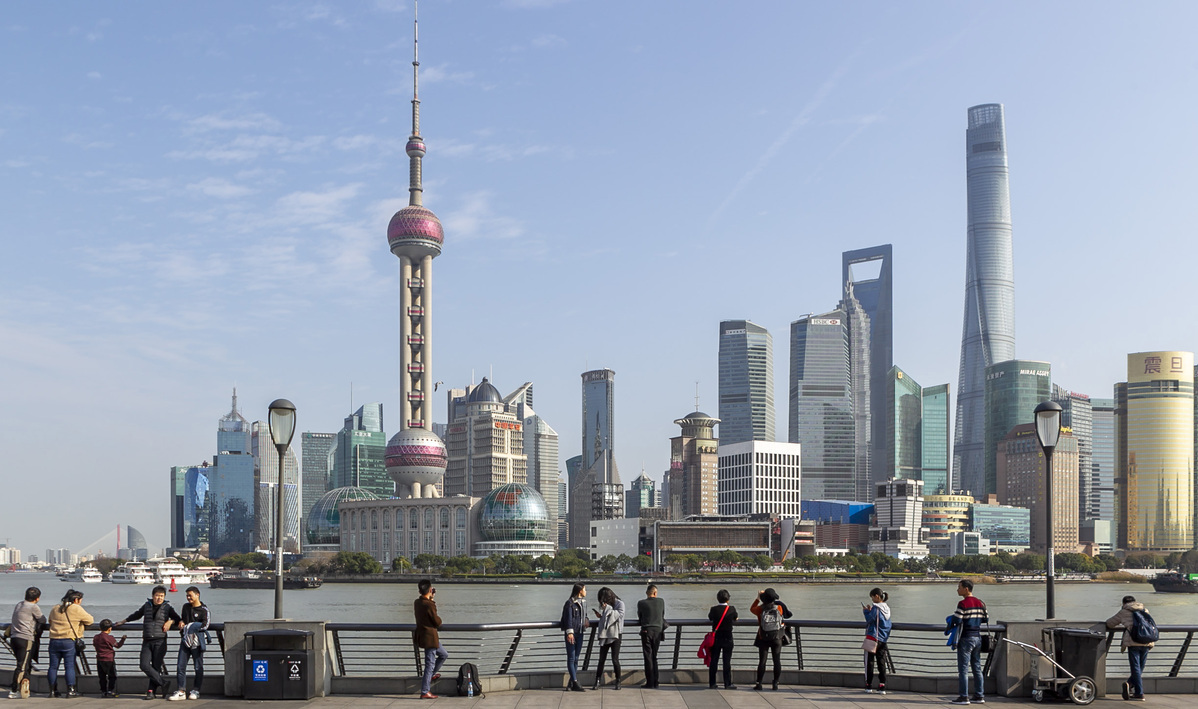 Tourists visit the Bund, a major scenic spot on the Huangpu River, in Shanghai on Jan 6. (Photo: Xinhua)

Three decades after opening-up, Shanghai's Pudong New Area has transformed from paddy fields to a bustling urban area of glistening skyscrapers, achieving many firsts and leading the transformation of the municipality and even the entire nation.

The State Council announced in April 1990 the launch of Pudong and implemented policies designed for economic and technological development zones and also utilized some measures practiced in special economic zones.

The China (Pilot) Free Trade Zone in Pudong, which was the country's first FTZ, was officially unveiled in September 2013. Up to 100 policies first tested in Pudong, such as the negative list mechanism for foreign investment, have now been promoted nationwide.

During a forum in September, Shanghai Party Secretary Li Qiang described the Shanghai FTZ as a platform through which world leading innovations will be incubated.

The bustling 31-square-kilometer financial district of Lujiazui in central Pudong is another major feature. Official statistics show that more than 870 domestic commercial banks, securities firms and insurance companies have set up branches or subsidiaries in Pudong.

In December 1996, Pudong became the first area to allow foreign banks to carry out renminbi services.

"As the functions of each part of Pudong were defined by that time－such as Lujiazui assuming financial functions－combined with the fact that People's Bank of China Shanghai branch moved to Lujiazui in June 1995, many foreign banks began moving to Lujiazui in 1997," said Pei Yigen, former deputy head of Citibank in China.

Saxo Bank opened its China office in Lujiazui in 2015. Although a comparative latecomer, the Danish bank understood that the phenomenal development of Pudong not only underpinned Shanghai's status as a financial center in China, but also globally, according to the bank's China CEO Xu Fan.

Pudong has also been a magnet for multinational companies. The area attracted $8.6 billion in foreign investment in 2019, up 10.2 percent year-on-year. By the end of March, a total of 730 multinational firms had set up regional headquarters in Shanghai, half of which are in Pudong.

In 2003, Honeywell moved its Asia Pacific headquarters to Zhangjiang Hi-Tech Park in Pudong. The United States conglomerate increased its investment in China in 2016 to expand its office area.

Honeywell's presence in Pudong has been conducive to the company's sustained development in China, said Scott Zhang, president of Honeywell China.

"China is now Honeywell's largest market outside the US. It is our hope to carry out more profound cooperation with Pudong-based Chinese domestic companies, such as Commercial Aircraft Corporation of China. The solid groundwork that we have laid in Pudong will continue to drive our development in China, playing a crucial role in our integration into the country's digital economy," he said.

The growing number of commercial properties has also indicated how Pudong has prospered over time. According to global property services provider Jones Lang LaSalle, there were about 1.52 million square meters of class-A office space available in the central business area of Pudong in 2009. The number exceeded 3 million by the end of 2018.

Eddie Ng, managing director of JLL East China, said that although global economic uncertainties have multiplied due to the spread of the novel coronavirus, Pudong has been quite experienced in tackling crises.

"In the long run, the accelerated financial opening-up and the upgrading of technologies will help to navigate the development of various industries," Ng said.

Pudong's 2019 GDP rose 7 percent year-on-year to top 1.27 trillion yuan ($179.36 billion), which was about one third of Shanghai's total GDP. But the city has even higher goals for Pudong. Shanghai Development and Reform Commission Director Ma Chunlei said at a news conference in June that Pudong's GDP will exceed 2 trillion yuan by 2025.

"The reforms underway in Pudong have been more integrated and focused. Therefore, efforts should be made to build Pudong into a benchmark of China's deepened reform and opening-up as well as innovative development," said Ma.

He Wei and Wang Ying in Shanghai contributed to this story.