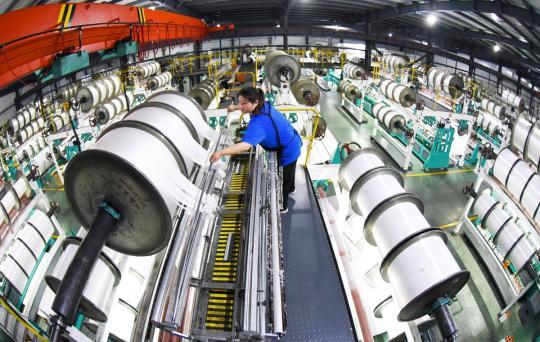 An employee works on the production line of a textile company in Lianyungang, Jiangsu province. (Photo: China Daily)

China is confident that it will continue its current robust industrial growth momentum, with notable improvements in production recovery and key technology upgrading, the country's top industry regulator and experts said on Thursday.

Their confidence came from the fact that the country has outperformed most global economies, with its industrial output, a key gauge of industrial activity, achieving positive growth in the first three quarters of this year.

According to Huang Libin, a spokesman for the Ministry of Industry and Information Technology, the country's industrial output rose by 1.2 percent on a yearly basis during the first three quarters of this year, reversing the decline of 1.3 percent seen in the first six months.

"Multiple factors are expected to help sustain the momentum (into the fourth quarter), including a more balanced resumption of production," Huang said at a news conference on Thursday.

The information and communications technology sector, in particular, has played a key role in supporting the economic recovery, he said. The sector's production index grew 10.1 percent on a yearly basis during the first nine months, while the total business volume of the telecom industry rose sharply by 18.6 percent year-on-year.

Wen Ku, head of the information and telecommunications development department at the ministry, said on Thursday that despite the challenges brought by the COVID-19 pandemic, China finished 5G construction ahead of schedule this year.

"As of September, the country had already built a total of 690,000 5G base stations, which was earlier than scheduled, and basically achieved 5G coverage in prefecture-level cities," he said, adding that more than 160 million terminals had been connected to the 5G network by Monday.

"With major indicators continuing to improve, 5G is expected to have a more apparent role in stabilizing investment, promoting consumption, driving industrial upgrading and cultivating new drivers of future economic development," he added.

Industry insiders pointed out that the good performance of the industrial economy was thanks to China's efforts to shore up economic growth amid the pandemic. With such momentum, China is likely to lead the global industrial recovery in the coming quarters.

It also comes after China's GDP growth turned positive in the first three quarters by hitting 0.7 percent year-on-year, after a 1.6 percent slide in the first half, according to the National Bureau of Statistics.

"The industrial indicators showed that the recovery on the production side was the most obvious, which was beyond market expectations," said Wang Jun, a senior researcher at the China Center for International Economic Exchanges.

"The sound performance on the production side means that the production constraints caused by the pandemic gradually disappeared, as COVID-19 was brought under control in the country," he said.

According to the International Monetary Fund, China's economy is set to be the only major economy showing positive growth in 2020 and is expected to grow by 1.9 percent this year.

"As the pandemic continues to influence industrial development globally, the country is likely to lead the global industrial recovery," Han said. "Through exporting medical supplies and daily necessities to the world, China is directly contributing to the world economic recovery."