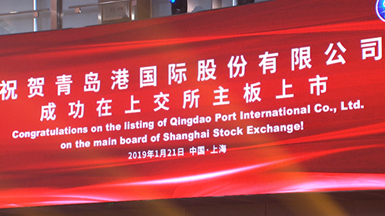 Qingdao Port International Co. Ltd, operator of the world's seventh busiest port by shipping volume and the largest in northern China, has been officially listed on the Shanghai Stock Exchange.

Set at 4.61 yuan (0.68 US dollars) per share, the Qingdao stock price surged by 44 percent to reach 6.64 yuan per share shortly after the stock market opened on Monday. The price kept soaring for three days at the upper limit for IPO share price growth to reach 8.83 yuan, nearly double the initial offer price.

Established in November 2013, the company has been listed on the Hong Kong Stock Exchange since June 6, 2014.

"The listing on Shanghai Stock Exchange will give a new impetus to the company's development as it is both on A-share and H-share markets," Li Fengli, chairman of the Qingdao Port Group, said.

"Qingdao port will make greater efforts to bring interests to its employees and shareholders."

Li said that the port aims to contribute more to China's opening-up and society in general.

Qingdao Port International Co., Ltd. is the primary operator of the Port of Qingdao in east China's Shandong Province.  Qingdao port, which is more than 100 years old, has connections with over 700 ports in 180 countries and regions. It recorded operating revenue of 8.6 billion yuan from January to September last year, a 13.54 percent increase from the same period in 2017.