Qualcomm gets license to provide old-fashioned 4G chips to Huawei

US chipmaker Qualcomm has received a license from the Trump administration to supply old-fashioned 4G chips to Huawei, which has been put under a US export ban to erase the Chinese high-tech company’s rise, according to media reports. 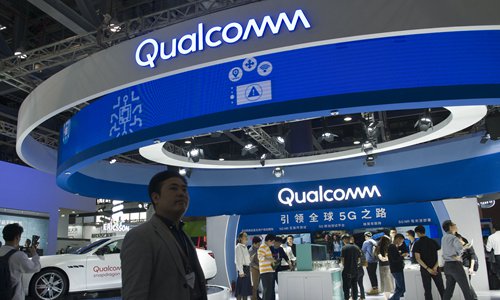 A Qualcomm booth at an exhibition in Guangzhou, capital of South China’s Guangdong Province Photo: IC

Qualcomm thus became the latest company after Intel and AMD and a couple of other American chipmakers to be granted a license to continue supplying some products to Huawei, which reportedly mainly bring a relief to Huawei's laptop computer production, and will not help with the company's high-flying 5G smartphone shipments.

Another US chipmaker - Micron Technology - is also expected to get a license to sell certain chips to Huawei.

The US government's ban prohibited US companies from supplying Huawei, as well as any company that uses US technology or equipment, effective September 15.

However, despite the approval, the license may have little impact on Huawei’s core business, as the high-end chips for 5G equipment and 5G mobile devices remain banned, Xiang Ligang, director-general of the Beijing-based Information Consumption Alliance, said.

“The mobile telecom industry is going through a shift from 4G to 5G, and while some customers in less developed regions might still need 4G gear and buy 4G devices, many markets are actively deploying 5G line-up,” Xiang said, “For now, it is still unclear when and whether the US government will allow resumption of supply of 5G-related products to Huawei.”