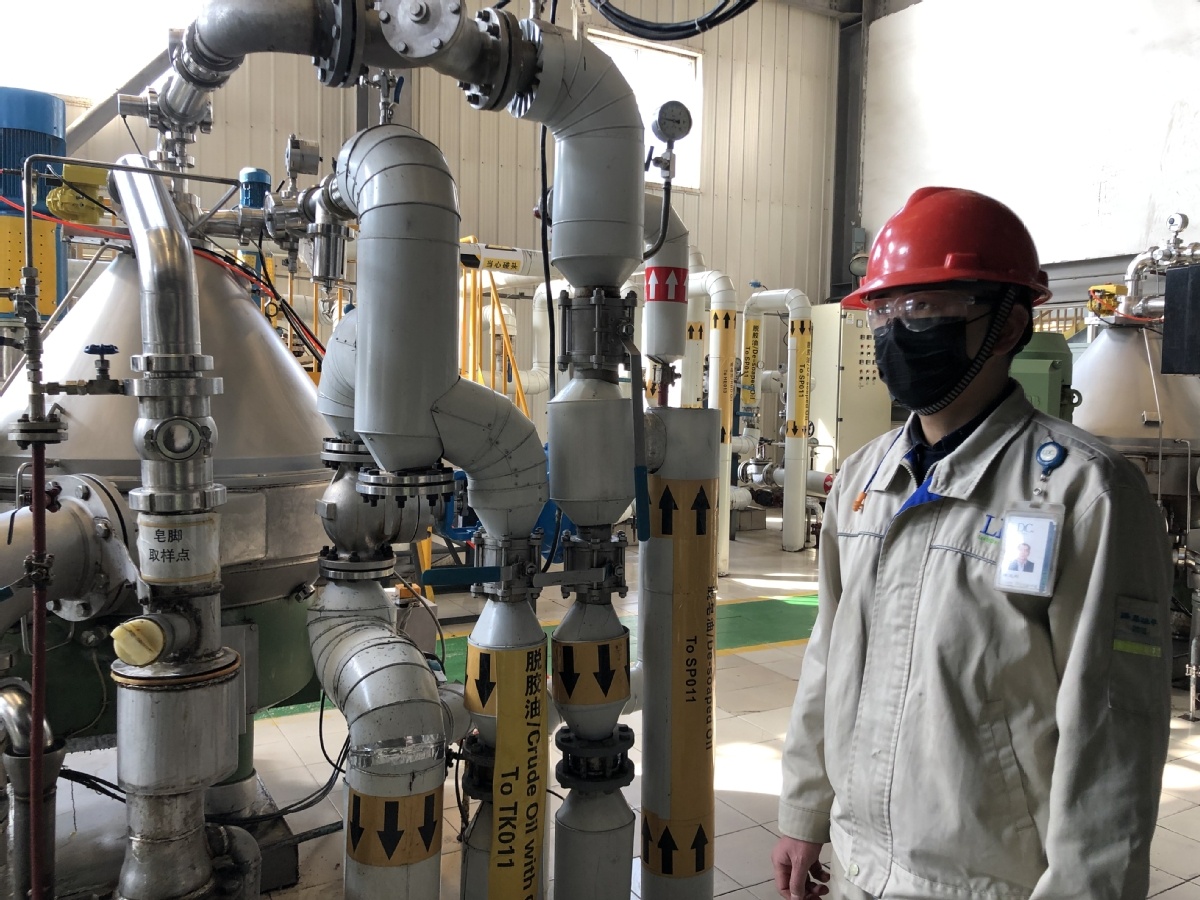 A Louis Dreyfus employee checks equipment at a facility in Tianjin. [Photo/Xinhua]

SHANGHAI－Stefan Bott was pleased with and astonished at China's efficient governance during its fight against the COVID-19 epidemic and the quick business resumption in the country as the epidemic waned.

The program director with Ventilation China under Vaillant Group, a global leader of high-efficiency heating, cooling and hot-water products and solutions, returned from China to Germany during the Chinese Lunar New Year holiday and worked in the German headquarters.

At the time, he was concerned about his ongoing projects in China. He has witnessed on site the group's step forward in the evolving Chinese market.

Vaillant Group opened a new exhibition hall in East China's Anhui province on May 26 and plans to open another one in Southwest China's Sichuan province by the end of this year, in a bid to get closer to its consumers.

"I came back to Shanghai as soon as the epidemic was well controlled in China," said Bott, adding that he hopes international business travel will resume soon so that he can reunite with his family.

The group's sales in China have returned to 80 percent of last year's sales in May, indicating the Chinese market's resilience amid the COVID-19 epidemic, according to Li Lintao, a sales director of Vaillant China's heating department.

Li said Vaillant remained confident in its development in the Chinese market despite the epidemic, adding that as China entered the phase of regular epidemic prevention and control, the company's investment plan in China will remain unchanged this year and it will increase the number of its sales staff by 15 percent to expand its business in China's third-and fourth-tier cities.

Shanghai, where Vaillant's China headquarters is located, saw rising foreign capital inflows totaling about $4.67 billion during the first quarter of this year, up 4.5 percent year-on-year.

As part of China's continuing opening-up steps, the third China International Import Expo will be held in November as planned in Shanghai, offering further opportunities for foreign companies to get closer to the world's largest consumer market.

Europe-based Louis Dreyfus Company, one of the exhibitors that will attend the CIIE for the third time, has seen its facilities in China gradually resume full operations, in line with the Chinese government's anti-virus measures.

"We highly appreciated China's efforts and achievements in fighting the epidemic, which allowed us to resume business in China rapidly and continue to fulfill our key role to keep customers and consumers supplied with essential food and feed products," said Nam-Ham Chai, head of industry for Asia at Louis Dreyfus.

"We hope China's experiences will help the world at large to get through this very challenging time," he said, noting that the company was confident about China's continued economic growth, and remains committed to investment and development in China.

The company is continuing to expand its presence in the country, most recently with investments in Shandong and Guangdong, to increase its oilseeds processing capacity and meet the country's growing demand for soybean products.