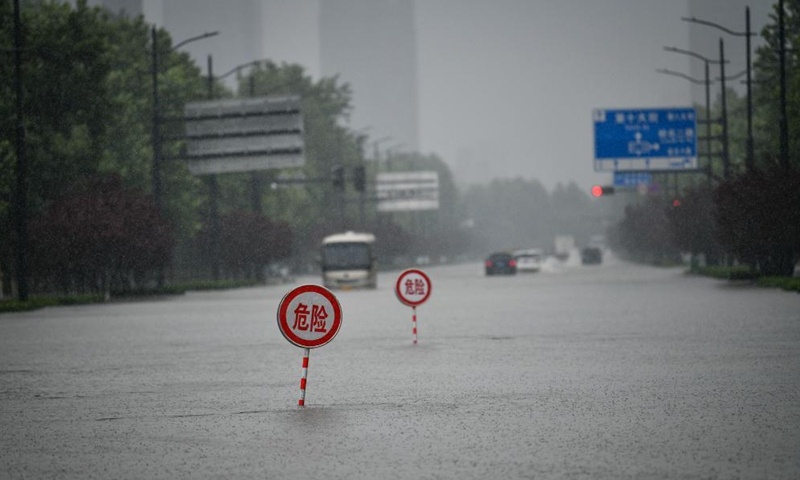 Multiple rail routes and highways through Central China's Henan Province have been cut off due to extreme weather which has caused 12 deaths, while large number of air flights have been canceled on Wednesday as record rainfall across the province swept through cities and villages.

Due to extreme torrential rain and subsequent flooding, a total of 29 sections of 26 highways in Henan are closed temporarily. In addition, eight national highways and eight provincial-level highways in Henan were cut off, the Ministry of Transport said on Wednesday.

Multiple north-south, east-west bound high-speed railways and normal-speed railways including routes between Zhengzhou and Luoyang in Henan Province, and railways connecting Lanzhou and Lianyungang respectively in Northwest China's Gansu Province and East China's Jiangsu Province, have been significantly damaged by flooding, according to China Railway.

The country's rail authorities have taken measures including limited running speed and suspending operations to ensure safety and services. Meanwhile, they have organized railway staff to offer food and beverage to stranded passengers, according to China Railway.

By 11 am Wednesday, passengers on K227 train traveling through Zhengzhou, capital of Henan, found themselves stuck on train for about 24 hours, domestic news site thepaper reported. It said that some passengers reported feeling unwell, but they are allowed to get off the train, and also have mobile signal to connect with family and friends.

Besides severe impact on land transport, the rare torrential rain also affects air transport to the large manufacturing hub. As of 9 am on Wednesday, a total of 660 inbound and outbound flights at the Zhengzhou Xinzheng International Airport were cancelled, accounting for about 70 percent of total flights, according to flight information platform VariFlight.

China Southern Airlines canceled a total of 157 inbound and outbound flights to the airport on Wednesday, the airline told the Global Times, noting that the company has implemented a series of emergency actions by opening more service counters and channels for passengers to transfer and will work to ensure the safety of stranded passengers.

On Wednesday morning, the website belonging to Zhengzhou Metro appeared in black and white. Local government said that Metro Line 5 was forced to stop at around 6 pm Tuesday as the heavy rain flooded the train, killing 12 people.