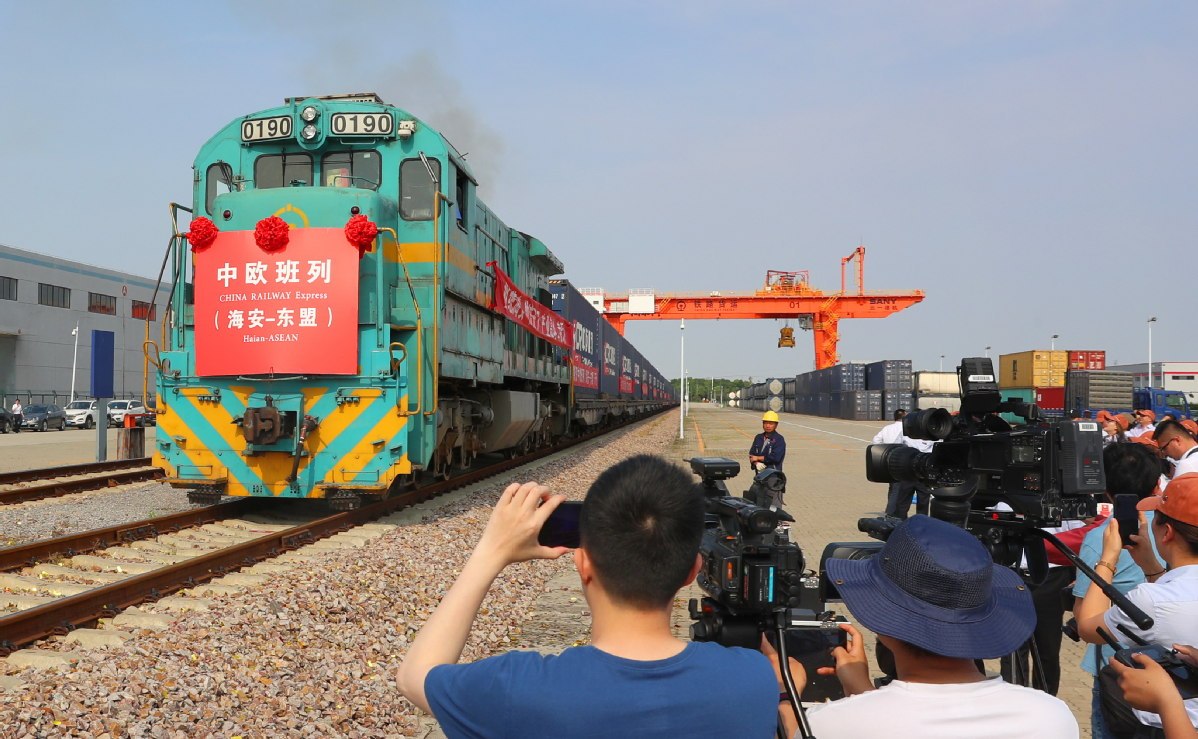 The first international freight train from the Yangtze River Delta region to ASEAN gets ready for its departure from Haian, Jiangsu province, to Vietnam in May this year. (Photo: China Daily)

With the Association of Southeast Asian Nations increasingly becoming China's key trading partner and construction of the China-Laos railway seeing notable progress this year, experts predicted that more freight train services will be operated between China and Southeast Asian economies over the next decade.

They made the remarks after Nantong, Jiangsu province, launched the first international freight train traveling from the Yangtze River Delta region to ASEAN carrying more than 70 containers of industrial goods, garments and photovoltaic products manufactured by companies in East China to Hanoi, Vietnam, in late May. It took about 120 hours for the train to complete the 2,300-kilometer long journey.

After arriving at Hanoi, the train returned to China carrying Vietnamese goods, including agricultural and electronic products. The service has brought considerable benefits to customers in the region as it has cut the transport period from 10 days by sea to about five days.

After this trial operation, the cargo train's operator－China Railway Shanghai Group Co－plans to run the trains between four and six times a month to better connect the Yangtze River Delta region and ASEAN markets in the second half.

COVID-19 has not only boosted the vitality of the China-Europe freight train service, but also stimulated both trade and railroad transportation volume between China and ASEAN so far this year, said Chen Yumou, deputy head of Nanjing branch of China Railway Shanghai Group Co.

Because the cost of transporting rail freight is nearly half that of overland road transport and as market demand remains robust on both sides, cargo trains between China and ASEAN members－in particular Vietnam, Laos and Thailand－will gain momentum this year, said Xu Liping, a researcher at the Chinese Academy of Social Sciences in Beijing.

With the China-Thailand railway project progressing smoothly, Thailand will enjoy more economic benefits once the high-speed railway connects the country's capital Bangkok with China and other countries in the future, said Zhang Yongjun, a researcher at the Beijing-based China Center for International Economic Exchanges.

According to the project plan released by China State Railway Group Co Ltd－the country's railway operator－the China-Thailand railway will eventually connect with the China-Laos railway. It will make the railroad network more accessible between China and ASEAN.

Backed by price advantages, reliable product quality and efficient service, China's train manufacturers and railway project contractors have enhanced their presence in overseas markets after the country completed construction of a high-speed railway in Turkey in 2014, said Sun Zhang, a professor at the Transportation Research Institute of Shanghai-based Tongji University.

The China-Laos Railway, the China-Thailand Railway and a high-speed line linking Jakarta and Bandung in Indonesia, have all adopted Chinese rail standards and technologies, he said, adding that the projects will spur economic growth along the rail routes.

Laos-China Railway Co Ltd, a joint venture based in the Laotian capital of Vientiane, handles the construction and operation of the railway, and the company announced last month that supportive construction of two cross-Mekong River bridges has been completed.

The China-Laos Railway crosses the Mekong River twice to the north of Luang Prabang, about 230 km north of Vientiane.

"The China-Laos Railway is a strategic project part of both the Belt and Road Initiative and Laos' national strategy to transform from a landlocked country to a land-linked hub," said Xu Ningning, executive president of the China-ASEAN Business Council.

The over 400-km railway, with 198 km of tunnels and 62 km of bridges, will run from the Boten border crossing in northern Laos, bordering China, to Vientiane with an average operating speed of 160 km per hour.

The train stops at Qinzhou port, Guangxi Zhuang autonomous region. Cargo such as auto parts and machinery equipment manufactured in Chengdu and Chongqing are then shipped to Ho Chi Minh City and Haiphong in Vietnam, and Jakarta, Indonesia, by sea routes.