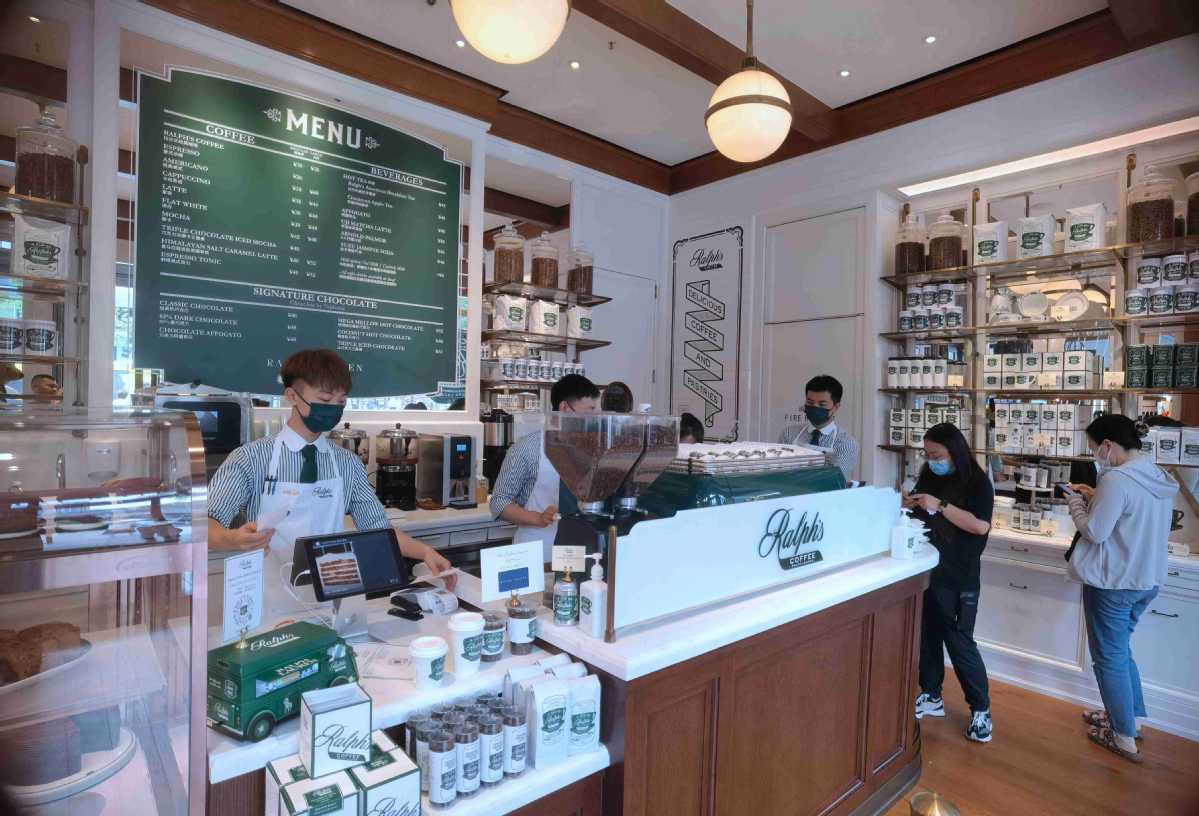 US designer clothing brand Ralph Lauren opened its first Ralph's Coffee shop in the Chinese mainland in Beijing in April. The coffeehouse is expected to help the company attract more consumers and boost its main business, an industry expert observed.

The coffeehouse is located in the Taikoo Li complex of Sanlitun, one of Beijing's busiest and most fashionable areas. The store occupies the original location of the Apple store in Sanlitun. Last year, Apple relocated its store to a more prominent and larger site next door.

Since 1999, Ralph's Coffee has opened a number of stores in New York, London, Paris, Tokyo and Hong Kong.

The three-floor store of Ralph Lauren in Sanlitun offers a wide variety of clothing, accessories and household items. Besides coffee and other beverages, the cafe also provides derivative products such as cups, shirts, caps and bags.

"Ralph's Coffee features a notion that combines coffee and fashion. For clothing brand Ralph Lauren, it has expanded its business in a different sector. The move is not new for the brand, but in China, there is increasingly a trend to add a coffee business to a company's main business," said Zhang Weilin, an analyst at the LeadLeo Research Institute, a market research provider.

Ralph's Coffee in Beijing employs dark green as the main color of its interior design, and it is matched with white walls and wooden decor. The coffeehouse occupies the first floor and also has a few tables available outside.

"Ralph's Coffee's selling points are not limited to coffee itself. Its good-looking interior design and stylish decor have helped attract a large number of consumers and online celebrities to visit the store, take pictures and post them on social media platforms. The coffeehouse is expected to help the brand further raise its brand influence in China,"Zhang said.

"Still, it also faces some challenges. Compared with other coffee chains, Ralph's Coffee features coffees that are best enjoyed slowly, often on premises. Most coffee consumers in China are young office employees, and they tend to spend more on fast coffee brands like Starbucks. Besides, given the deep-rooted tea culture in China, the culture of slow coffee is not mature enough yet," she said.

Currently, China's sales revenue of freshly brewed coffee exceeds 46 billion yuan ($7.1 billion) annually, accounting for just over 10 percent of total global revenue of the sector. The growth rate of the coffee segment in China has been much faster than the global average, and it is showing considerable room for further growth, according to LeadLeo.

In terms of business operating models, a clothing brand can attract more consumers by utilizing the social attributes of a coffeehouse, as it encourages consumers to stay in the store longer, LeadLeo said.

In this case, a brand will be able to market its products to potential buyers and draw in more people to spend on clothing, and thus drive revenue growth of its main business, the consultancy said.

In China, there are mainly three categories of coffee drinks available in the market. Instant coffee takes 83 percent of the market share while freshly brewed coffee accounts for 15 percent. The remainder is taken by bottled ready-to-drink coffees, according to Shenzhen-based research firm AskCI Consulting.

Among coffee drinkers in China, more than 60 percent usually drink three cups or more of coffee weekly. Per capita spending on coffee and coffee drinking frequency of consumers in Shanghai top other cities nationwide, with the figures similar to many developed markets. Competition between numerous coffeehouses has been fierce in major Chinese cities, said AskCI Consulting.

Still, China's per capita consumption volume of coffee is much lower than that of the United States, South Korea and Japan.

The penetration rate of coffee is less significant in smaller urban areas, but there are rosy growth prospects for the next few years, the report said.