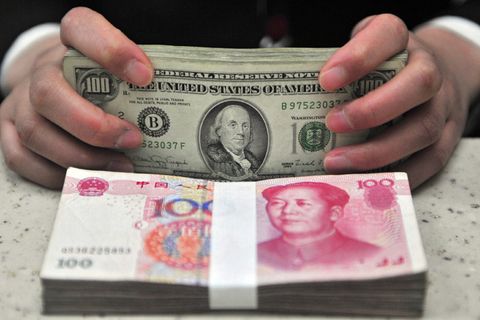 The statement came as the renminbi has seen notable appreciation in the past few months. Economists said that the sound fundamentals of the Chinese economy will support the value of the Chinese currency and renminbi-denominated assets while Beijing's foreign exchange policy is expected to focus on maintaining stability with possibly greater tolerance for increased exchange rate flexibility.

Wang Chunying, deputy director and spokesperson for the State Administration of Foreign Exchange, said the recent appreciation of the renminbi has been largely supported by the fundamentals of the domestic economy as China has effectively controlled the pandemic and the country's social and economic activities have been on a steady path of recovery.

"International organizations have forecast that China is likely to be the only major economy to have a positive GDP growth rate this year. Good prospects for the country's exports and increased holding of RMB-denominated assets by overseas investors have led to the appreciation of the currency," Wang said at a news conference in Beijing.

The renminbi's appreciation has been relatively mild and in line with the performance of other major international currencies, Wang said. The Chinese currency has appreciated by about 4.5 percent against the United States dollar this year. This compared with a 5.9 percent appreciation of the euro against the US dollar and the Japanese yen's 4.1 percent rise against the greenback, according to SAFE.

In the first three quarters, China's commercial banks saw a surplus of $76.2 billion in the settlement of foreign exchange. The country has seen a net capital inflow since the second quarter, reversing a deficit of $26 billion in the first quarter. China's foreign exchange reserve also saw a slight increase, rising to $3.14 trillion by the end of September, according to SAFE.

Economists said that the market may see more mild appreciation of the Chinese currency in the future given China's stable economic recovery and the policymakers' willingness to maintain a normal monetary policy as long as possible.

"This seems to suggest that the Chinese central bank is happy with keeping domestic market interest rates higher than offshore rates, and happy with the fact that this will attract more capital inflows. ... We think this is a signal that the central bank will allow for more RMB appreciation than previously, which is also in line with its goal of increased exchange rate flexibility," Wang Tao, chief China economist with UBS Securities, said in a research note.

While the Chinese regulator may step up efforts to cool the short-term appreciation momentum of the renminbi, the country's long-term goal is to promote more balanced two-way capital flows and to maintain the general stability of the Chinese currency, experts said.

Wang Chunying, the SAFE official, said at Friday's news conference that China will further open its bond market to overseas investors, expand the quota of outbound investment under the Qualified Domestic Institutional Investors plan and push reforms in the management of cross-border investment by private equity funds.

While the renminbi may see short-term fluctuations given the lingering uncertainties in China-US relations and possible global liquidity turbulence from the US presidential election, Cheng Shi, an economist at ICBC International, said that China's continued economic recovery will further consolidate the value of RMB-denominated assets and the country's reform and opening-up measures in the capital markets will further boost the competitiveness and attractiveness of renminbi assets in the long run.