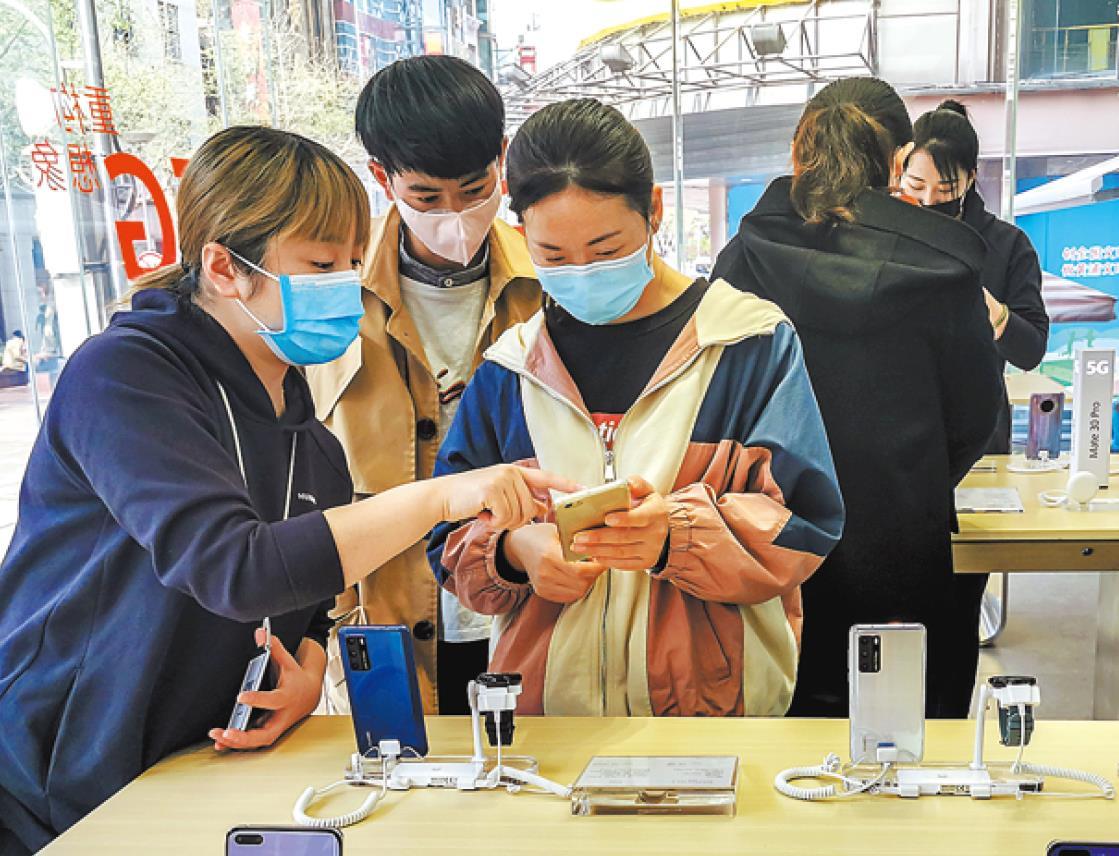 Consumers try out a Huawei smartphone at a shop in Shanghai on April 15. (Photo by Wang Gang/For China Daily)

Zhang Yajing has been selling smartphones for more than a decade in Huainan, Anhui province. Normally, the Spring Festival holiday is the busiest period for her, but this year, things turned out to be much tougher, due to the COVID-19 pandemic.

"I was deeply worried when I resumed work in February," Zhang said. But soon, she found a way to turn the challenge into an opportunity. With the increasing popularity of livestreaming, Zhang decided to adopt the new way to sell handsets online. Her colleagues are responsible for product delivery services.

"The sales recovered rapidly, because the more people spend time with their smartphones, the faster they realize they need better devices," Zhang said.

Zhang's experience mirrors a broader trend in China in which consumers are reigniting demand for electronic devices like smartphones, PCs and tablets, as the novel coronavirus outbreak comes under better control in China.

Local electronics makers are experimenting with new sales campaigns such as partnering with livestreaming platform operators and food delivery companies in hopes of hitching a ride on the consumption-revival bandwagon.

In March, more than 21.75 million smartphone units were shipped out of factories to the China market, marking a 240 percent surge from February, according to the latest data from the China Academy of Information and Communications Technology, a government think tank.

Ren Zhengfei, founder and CEO of Huawei, said that despite epidemic-related hardships, the company has managed to maintain growth in smartphone sales.

"Currently, we sell about 450,000 smartphones in China every day," Ren said in late March. "As the demand further recovers, monthly sales are expected to reach 20 million units later this year."

Yang Yuanqing, chairman and CEO of Lenovo Group Ltd, the world's largest personal computer maker, said that as people stay at home to work and study, the demand for PCs, tablets and displays has increased. The growing demand for mobile games also provides plenty of opportunities.

Data from Fenqile, China's first installment-payment e-commerce platform under Nasdaq-listed LexinFintech, also indicates a demand revival. In April, sales of iPhones increased 20 percent month-on-month on the platform, which serves mostly Generation Z consumers (those born in the past 25 years).

"The short-term impact from the pandemic won't change the long-term consumption momentum of young Chinese consumers, who are the dominant force of China's consumer market, and are known for their fondness of trendy products such as new smartphones," a Fenqile spokesperson said.

"We expect the sales of smartphones to steadily pick up in the following months and the rest of the year, especially with the potential rollout of multiple 5G smartphones from renowned brands," the spokesperson said.

A recent national online survey conducted by Fenqile found that 5G smartphones and Apple products are among the most popular in the post-pandemic era among young Chinese consumers.

Some novel ways of selling electronic devices are emerging as consumers spend more time at home.

Ma Bin, a software developer in Beijing, recently came across a link for a new 5G smartphone when he was buying a bowl of rice noodles via a food delivery app earlier this month.

He ended up pushing the purchase button, and in just half an hour, the smartphone was in his possession－along with the rice noodles.

"I was surprised. I never expected to buy a smartphone on a food delivery app, and it arrived at my home so quickly," Ma said. Consumers in Beijing, Shanghai and Wuxi, Jiangsu province, can now buy smartphones on the food delivery app Meituan-Dianping.