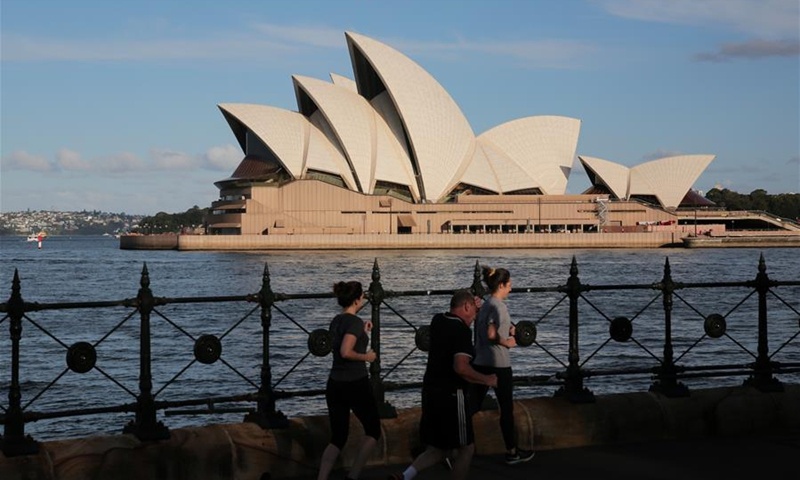 People jog near the Sydney Opera House in Sydney, Australia, Nov. 2, 2020. The Sydney Opera House reopened to audiences on Sunday evening, for the first time since March when it was forced to close due to the pandemic, breathing life back into the country's struggling performing arts sector. (Xinhua/Bai Xuefei)

The signing of the landmark Regional Comprehensive Economic Partnership (RCEP) can no doubt improve the trade environment between China and Australia, but it may not be enough to mend bilateral ties, which are at rock bottom with no sign of recovery, due to Canberra's irrational attacks on China and discriminatory measures against Chinese investment, analysts said.

Australia still needs to take substantive steps, correct its wrongdoings - from spearheading the US' anti-China campaign to unreasonably restricting Chinese companies' operations - if it wants to win back the biggest market, one that it cannot afford to lose, they noted.

The comments came as China and 14 other economies including Australia signed the RCEP, the world's largest trade deal, on Sunday to form a free trade zone in the Asia-Pacific region that will encompass one-third of the global economy.

Observers called the pact a historic win for multilateralism that will help the regional and global economies cope with the COVID-19 pandemic and rising protectionism.

The removal of tariff and non-tariff barriers alone under the RCEP will increase the Asia-Pacific region's GDP by 2.1 percent and world GDP by 1.4 percent, according to estimates.

This multilateral trade pact will of course help Australia improve its business relations with China, and help it better integrate into the Asia-Pacific region, Liu Qing, vice president at the China Institute of International Studies, told the Global Times on Sunday. The signing has come at a critical moment with protectionism rising globally, and it also shows that China and Australia share the common values of promoting multilateralism and free trade.

The mining, agriculture, animal husbandry and pharmaceutical industries in Australia are expected to be the sectors that benefit the most under the RCEP pact, Yu Lei, chief research fellow at the research center for Pacific island countries of Liaocheng University in East China's Shandong Province, told the Global Times on Sunday.

Japan will eliminate 61 percent of the tariffs on agricultural imports from Australia, New Zealand, and the Association of Southeast Asian Nations.

The Australian side is apparently expecting "more than trade" from the pact.

Nevertheless, Liu noted that the RCEP can only be viewed as "running one of the four wheels on the carriage of China-Australia ties," adding that problems between the two persist and "we see no signs of recovery even with the trade pact."

As long as Canberra does not correct its wrongdoings, and it continuously and blindly follows the US' anti-China campaign and politicizes Chinese companies' normal economic activities, the bilateral trade relationship cannot easily get back on track.  Chinese consumers' confidence in Australian products would also drop significantly, analysts said.

In recent years, Australia has repeatedly increased discriminatory scrutiny of Chinese investments and exclusion of Chinese capital. Since 2018, more than 10 Chinese investment projects have been rejected by Australia, citing ambiguous and unfounded "national security concerns" to ban Chinese companies from its 5G network building, and impose restrictions in areas such as infrastructure, agriculture and animal husbandry, according to the Chinese Foreign Ministry.

"All the above measures Canberra has taken are inconsistent with the fundamental spirit and principles of multilateral and bilateral trade and investment agreements. If Australia cannot correct these errors, it cannot expect a multilateral agreement, such as the RCEP, to play its due role," Yu said.

China is Australia's largest trading partner by far, and last year it imported $149 billion worth of goods from Australia.