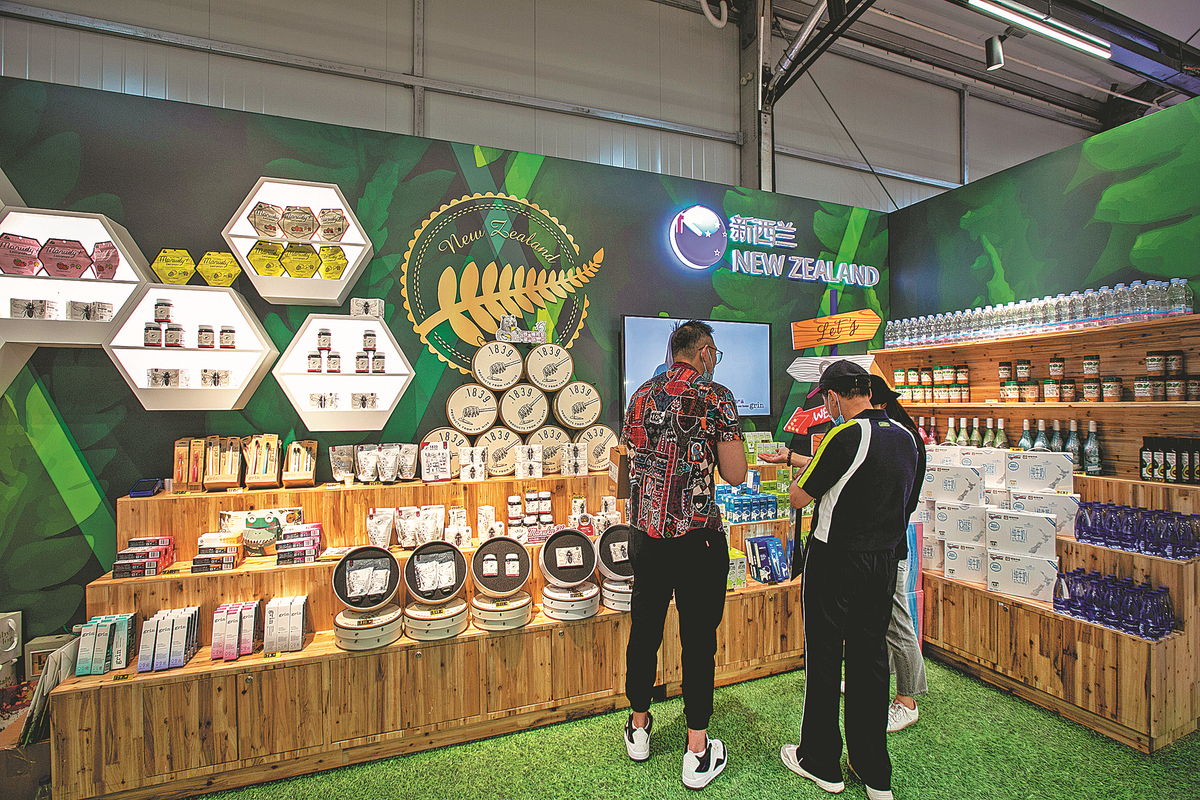 Visitors check out products from New Zealand during an import expo in Shanghai in May 2021. [Photo: China Daily]

For Hu Dongmei, general manager of Dalian, Liaoning province-based Dayang Group Co Ltd, a large-scale made-to-measure suit exporter with more than 4,500 employees, the implementation of the Regional Comprehensive Economic Partnership agreement was news to her almost four months ago.

However, Hu and her colleagues in the sales department have become experts these days in helping their clients from Japan and South Korea to apply for certificates of origin under the RCEP framework from local Customs authorities, which will allow buyers to enjoy preferential tariff rates for its suits that are exported to these signatory economies.

"Because the Japanese yen hit its lowest levels against the dollar several times since 2002, many Japanese clients have asked us to help them apply for such certificates to hedge their losses with the weak currency exchange rates because all transactions need to be settled in US dollars," she said, adding that the company plans to export products worth between $180 million and $200 million this year while continuing to expand the RCEP markets to reach more consumers.

Taking effect on Jan 1 this year, the pact's signatory countries account for roughly 30 percent of the world's gross domestic product and population. Over 90 percent of trade in goods among approved member states will gradually be tariff-free, according to information from China's Ministry of Commerce.

The implementation of the mega pact not only has brought tax cuts to foreign importers, but also will encourage domestic manufacturers to ship more goods to other RCEP markets in the coming years.

One of them is Beiqi Foton Motor Co Ltd, a commercial vehicle manufacturer and a subsidiary of Beijing-based BAIC Group. The company plans to export 1,000 trucks to Malaysia this year.

"Based on the relevant import policies of Malaysia, the country used to charge as high as 30 percent import tariffs on our trucks, but the tariff rate has been cut to 5 percent once we gained the certificate of origin issued by the Customs authority, saving an average tariff of about 40,000 yuan ($6,232) per truck," said Ma Rentao, president of the international trade unit at Beiqi Foton Motor Co Ltd.

"Under the RCEP framework, the tariff rate of Chinese trucks will be reduced year by year, and will eventually drop to zero," said Ma, noting that this will help Chinese automakers to further develop the Southeast Asian market.

With the implementation of the RCEP agreement, Malaysia's COVID-related recovery will go into hyper-drive. The free trade agreement will reduce and even eliminate barriers and tariffs so it can accelerate the creation of a new supply chain within the Asia-Pacific region, said Azlimi Zakaria, the consul-general of Malaysia in Nanning.

"It will also help propel both established businesses and small and medium-sized enterprises to be more competitive to venture into more international trade ecosystems," he said.

The diplomat said that Malaysia has already invested in e-commerce, digitalization, and other relevant sectors with the help of the National Trade Blueprint (NTB) 2021-2025 which will enable the country to reap maximum benefits of the RCEP by creating a more conducive ecosystem for its businesses.

Thanks to favorable terms in areas including tariffs and a complementary trade structure, China's foreign trade with the other 14 RCEP members grew by 6.9 percent yearly to 2.93 trillion yuan ($460 billion) in the first quarter, according to China's General Administration of Customs.

A total of 12 RCEP members from seven ASEAN member states and the five partner countries to date have completed the ratification process.

Zhai Jingli, deputy CEO for China at Asia Pulp and Paper (APP), a subsidiary of Indonesia's Sinar Mas Group, said due to the current tariff system, although there are no tariffs on pulp, the company's imports of finished products from Indonesia still face tariffs of around 5 percent, while some products maintain 2 percent or 7.5 percent.

She believes that after Indonesia ratifies the RCEP agreement, the industrial relationships and investment structures will be significantly enriched between various member economies.

"APP will be able to export more pulp and raw materials to China and then export a part of the finished products made in China to other RCEP markets, to meet diversified demand both internally and internationally, as well as help support the growth of the regional economic integration," she added.

The attraction effect of the RCEP implementation on regional trade is gradually emerging, said Gao Feng, spokesman for China's Ministry of Commerce.