BUSINESS RCEP may be signed by year-end, probably without India: experts

RCEP may be signed by year-end, probably without India: experts 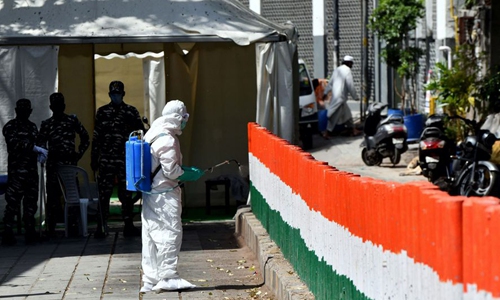 A health worker sanitizes an area near the Nizamuddin mosque in New Delhi, India, on April 10. (Photo: Xinhua)

The downward pressure posed by COVID-19 on the member countries of the proposed Regional Comprehensive Economic Partnership (RCEP), as well as China's relatively early economic recovery, may encourage progress on regional economic cooperation and lead to an agreement being signed by year-end, according to experts, but the process might not include India.

RCEP negotiations have dragged on since formally starting in 2012. On Sunday, Singapore Minister of Trade and Industry Chan Chun Sing said that the trade deal is "still on track" for signing at the end of this year, and if India doesn't join, the other countries will still prepare for a signing by then, according to Reuters.

Li Wei, senior research fellow of the National Academy of Development and Strategy at Renmin University of China, who is also working closely on the RCEP negotiations, told the Global Times that the COVID-19 pandemic is putting pressure on many export-reliant ASEAN countries, and might accelerate the pace of the signing process.

"The first half of 2020 is an economic disaster for exporters in ASEAN, and they are eager for the RCEP to be signed and take effect after the pandemic so that they can make up for the losses in the context of a big regional free trade zone," Li said.

Li also noted that as China recovers from the pandemic, which paralyzed its economic activity, its massive demand is also reviving and creating opportunities for exporters in the RCEP member countries.

However, uncertainties persist around India, which dropped out of the talks in November last year.

"India's concerns come mostly from its fragile economic structure, which is heavily reliant on agriculture and inadequate in terms of industry and infrastructure," Zhou Rong, a senior research fellow at the Chongyang Institute for Financial Studies at Renmin University of China, told the Global Times.

"Given the circumstances, the country is worried that the regional trade pact will lead to a surge in imports and hurt domestic industries such as manufacturing and dairy farming," Zhou added.

After the RCEP Trade Negotiation Committee met from April 20 to 24, a package was sent to India indicating accommodations of some of the country's concerns. However, despite media reports that claim India is contemplating rejoining the trade pact, experts said it is highly unlikely that an agreement can be reached and signed by year-end.

"India's main concerns are on exports and imports, and it will be very demanding in that aspect," Li said. "It is unlikely that we can reach an agreement between India and everyone else in the free trade pact before this year ends."

In 2018 to 2019, India registered trade deficit with 11 RCEP member countries out of the total 16. Indian Prime Minister Narendra Modi said that allowing a free trade zone in the region is feared to be against "Indian economic interests."