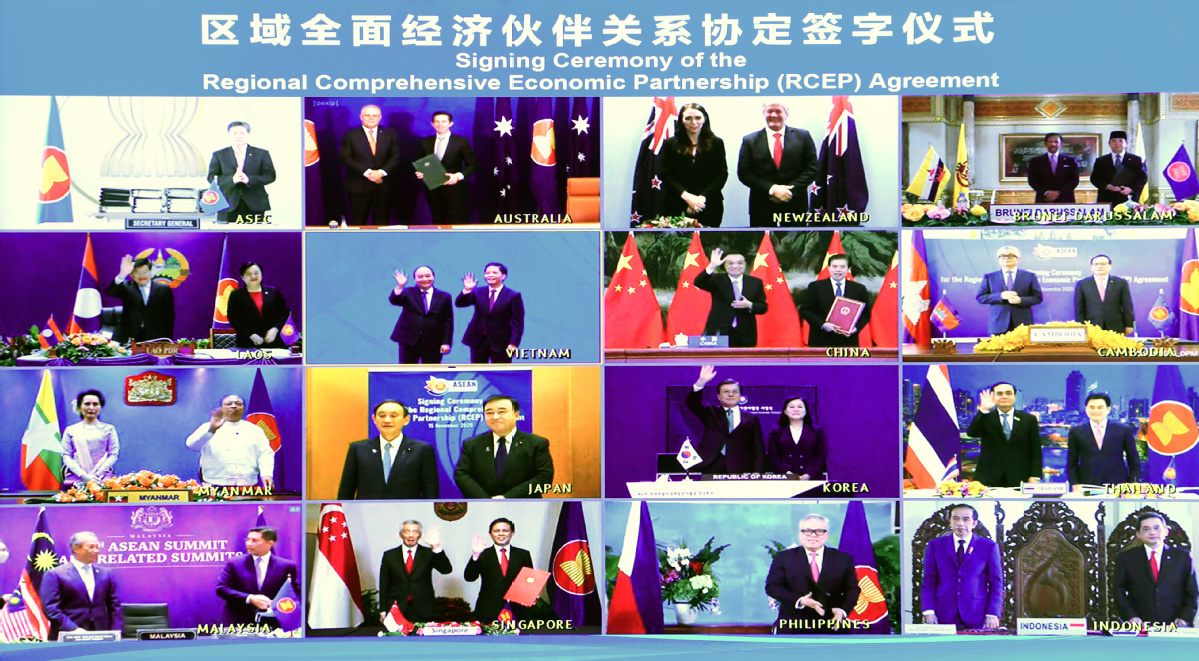 Leaders and trade ministers from ASEAN and the 15 Regional Comprehensive Economic Partnership countries pose for a virtual group photo at a videoconference hosted by Vietnam on Sunday. The countries will form the world's largest trading bloc, encompassing nearly a third of all economic activity. (Photo: Zhang Ling/Xinhua)

Fifteen Asia-Pacific countries on Sunday signed the Regional Comprehensive Economic Partnership agreement, the world's largest free-trade deal, which was hailed by Premier Li Keqiang as "a victory of multilateralism and free trade".

The agreement involves all 10 member countries of the Association of Southeast Asian Nations and five of its major trading partners－China, Japan, South Korea, Australia and New Zealand.

With the largest participating population in the world, the most diverse membership and the greatest development potential, the RCEP will inject new impetus into regional development and prosperity, and contribute to the recovery and growth of the world economy, Li said as he participated in the fourth RCEP leaders' meeting via video link.

"The signing of the RCEP is not only a landmark achievement of East Asian regional cooperation, but also a victory of multilateralism and free trade," he said.

Li said that after eight years of negotiations, the signing of the agreement has brought hope to people amid the current grim international situation, showing that multilateralism and free trade remain the correct direction for the world economy and human progress.

The RCEP allows people to choose solidarity and cooperation when facing challenges, instead of resorting to conflict and confrontation, and also allows them to choose mutual assistance and support, rather than adopt a "beggar-thy-neighbor" approach or a "wait-and-see" attitude, he said, adding that it shows the world that opening-up and cooperation are the only way to achieve mutually beneficial outcomes.

The premier also underlined the important leading role played by ASEAN countries during the RCEP negotiations, saying that China will continue to firmly support ASEAN's central role in pushing forward the follow-up work regarding the implementation of the RCEP agreement.

The leaders of the participating countries witnessed the signing of the agreement and said the RCEP will remain open to India and that they welcome India's early involvement.

The total population and economic and trade volume of the 15 member economies account for about 30 percent of the world's total, indicating that about one-third of the world's economies now form an integrated market, said Wang Shouwen, vice-minister of commerce.

This will significantly boost regional trade and investment, reinforce industrial and supply chains, and enhance the ability of all parties to fight against the pandemic, as well as promote the economic recovery of all countries, and promote the region's long-term prosperity and growth, he said.

In the meantime, the pact will also provide a path and a strong impetus for the development of the Free Trade Area of the Asia-Pacific, or FTAAP, said Wang, who also is China's deputy international trade representative. 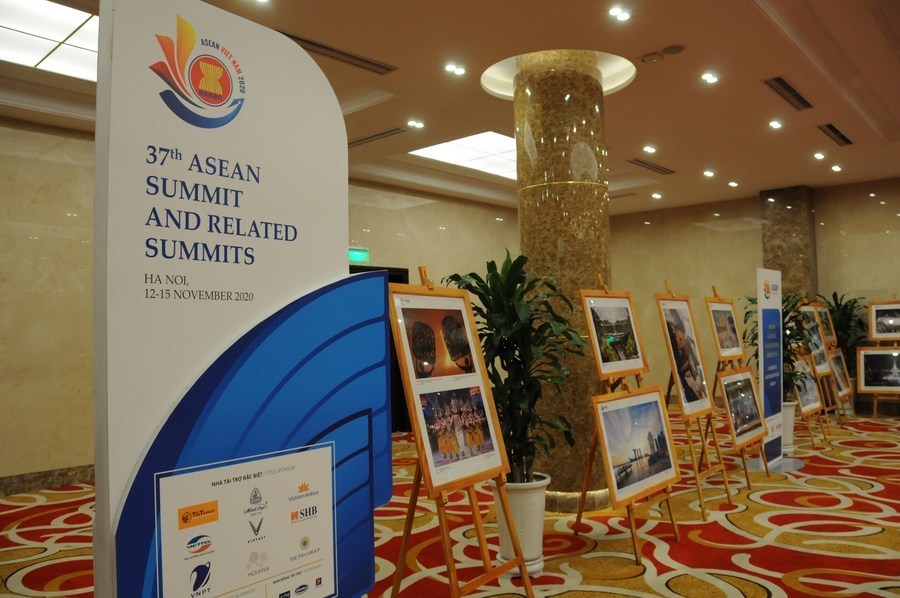 Photo taken on Nov 12, 2020 shows a view of the International Convention Center in Hanoi, capital of Vietnam. (Photo: Xinhua)

The official noted that the RCEP supports the liberalization and facilitation of trade and investment with practical actions. It will boost global economic confidence, and the signing of the pact shows that all members are committed to cutting tariffs, opening markets and lowering barriers.

"It sends a strong signal against unilateralism and protectionism, strongly supports free trade and the multilateral trading system, and contributes to the formation of a positive effect on the global economy," said Wang, adding that it is expected to stimulate global economic recovery after the pandemic.

Thanks to the signing of the RCEP, China and Japan also reached a bilateral tariff reduction arrangement. This historic breakthrough will help promote the realization of a high level of trade liberalization in the region, according to the Ministry of Finance.

The trade value between China and other RCEP members amounted to $1.06 trillion in the first three quarters of this year, accounting for about one-third of China's total foreign trade, according to the Ministry of Commerce.

The RCEP, which contains 20 chapters covering a wide range of categories including goods trade, investment and e-commerce, is a "modern, comprehensive and a high-level win-win agreement", said Wang. Under the deal, members will aim to cut tariffs to zero in the coming decade, according to the Ministry of Finance.

Wang said that the RCEP deal will expand China's export market space, meet the needs of domestic consumption for imported goods, enrich the regional supply and industrial chains, and stabilize foreign trade and investment. It will also be helpful in promoting the "dual-circulation" development pattern, which is centered on the domestic economy and aimed at better integrating the domestic economy with the global economy.

Zhang Jianping, director-general of the China Center for Regional Economic Cooperation, said the sealing of the RCEP deal will build a solid foundation for future negotiations on the China-Japan-South Korea Free Trade Agreement.

Compared with other free-trade agreements in operation across the world, Zhang said the RCEP is a new type of agreement with greater inclusiveness. For example, the agreement not only covers topics such as goods trade, cross-border investment, dispute settlement and trade in services, but also involves new issues such as intellectual property, digital trade, finance and telecommunications.