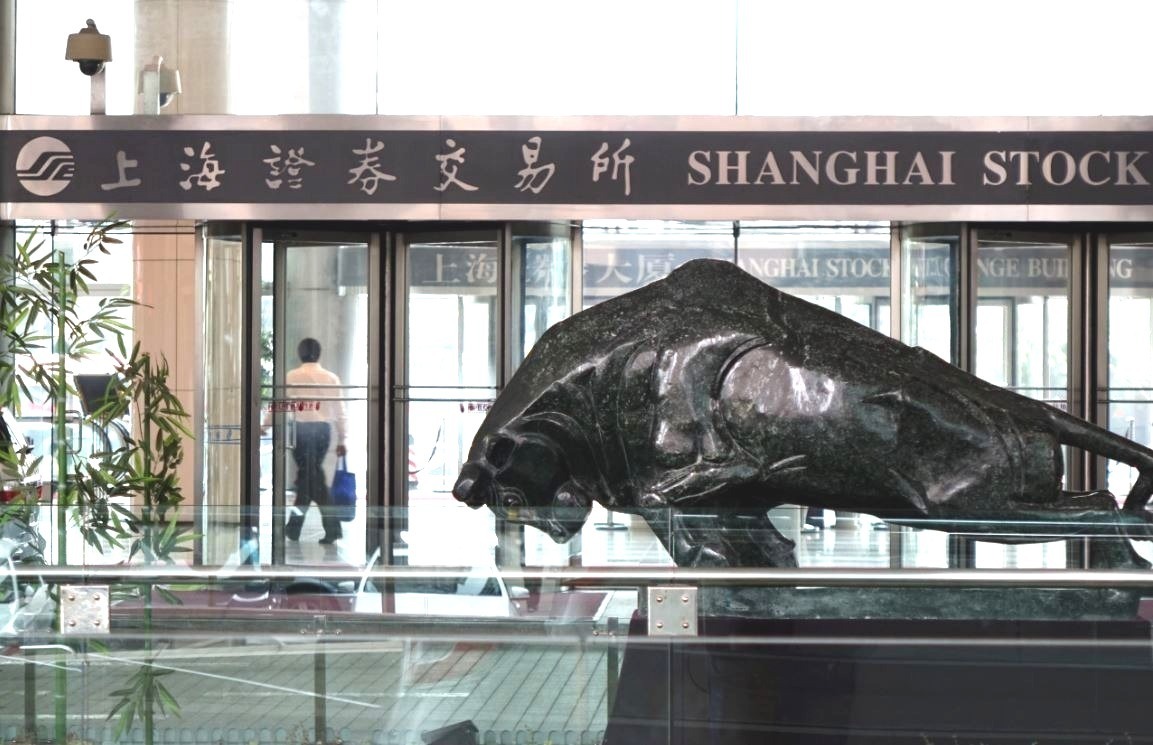 A view of the entrance of the Shanghai Stock Exchange. (Photo: China Daily)

Red-chip firms are those incorporated overseas but operate in the mainland, with a great number of Chinese issuers in the US falling in this category. Previously, red-chip firms had no access to domestic public equity markets but the door has opened after a slew of reform measures since 2018.

Qualified red-chip firms, even with special ownership arrangements like weighted voting rights or variable interest entity, are now allowed to get listed in the mainland, via the issuance of stocks or Chinese Depository Receipts or CDRs, which represent the issuers' shares.

The Wuxi-based China Resources Microelectronics Ltd debuted on Shanghai's STAR Market in February as the first red-chip company that made an IPO in the mainland bourses, followed by the stock issuance of SMIC, which also operates as a red-chip company.

The first CDR issuance was made by Ninebot Ltd in Shanghai in October. The Beijing-based robot maker is not only a red-chip company but adopts a variable interest entity structure.

The Shenzhen Stock Exchange is expected to catch up with Shanghai in the issuance of CDRs, as the central government released a document in October that encourages overseas-incorporated innovative companies to issue CDRs in Shenzhen on a pilot basis.

On the other hand, valuation differences will also encourage a lot more US-listed Chinese firms to head for the A-share market and receive a higher valuation. The pathway could be to go private first and then seek a re-listing domestically, with the red-chip structures maintained or removed on a case-by-case basis.

Despite that large-cap new-economy Chinese enterprises receive high valuations in US stock markets, small and medium-cap ones are poorly valued compared with mainland markets, especially Shanghai's STAR Market and Shenzhen's ChiNext board.

At a time when the capital market has become a core link in China's dual-circulation development pattern, the re-listing of Chinese firms in the A-share market has assumed greater significance than ever.

It would not only unfold strategic investment opportunities for investors but help optimize the structure of listed firms and strengthen the competitiveness of the A-share market.

Investors are expected to be excited about the potential comeback of Chinese issuers, and speculative trading may be triggered in the short term.

In a longer-term perspective, however, investors will gradually value the shares rationally in comparison with similar ones listed in Hong Kong, the US, and other markets around the world, a process that will narrow the valuation differences of Chinese issuers among different listing venues.

It is a great achievement for the mainland stock markets to complete rule revamps in only three years to embrace the re-listings from overseas listed issuers, as part of the broader IPO reforms to spur innovation.

But more efforts are needed when it comes to enhancing the efficiency of public companies' re-financing channels and mergers and acquisitions. The A-share market still lags behind its US and Hong Kong counterparts in this aspect, despite recent policy relaxations.

It is also worth noting that though the re-listings may provide more quality investment targets for A-share investors, it is still advisable for the governments from both sides to cooperate and resolve the audit dispute, preventing political forces from intervening in market issues.

The writer is chairman of Sensegain Asset Management Co Ltd, a Beijing-based private equity firm. The article is based on his speech at a recent forum co-hosted by ICBC International, a corporate financing platform, and Caixin, a business news outlet.

A series of high-profile secondary listings of technology companies such as JD and NetEase in Hong Kong this year appear to have created a mistaken belief－that most of the Chinese stock issuers facing a potential delisting threat in the United States will seek refuge in the Hong Kong stock exchange.

Indeed, secondary listings in Hong Kong have become the main channel for qualified US-listed Chinese companies returning home for finance so far. But, increasingly, more medium-and small-cap Chinese issuers will instead seek to re-list on the mainland stock markets in the future.

This would be a trend decided by the difference in valuation levels of Chinese firms in the US and mainland markets, as well as China's capital market reform and opening-up measures in place. Investors should get prepared for the strategic investment opportunities brought by the potential wave of re-listings.

Ever since Luckin Coffee Inc owned up to its financial misreporting in April, the US government has ratcheted up delisting threats against Chinese issuers.

Most recently, the US House of Representatives passed a bill on Wednesday, which proposed to delist Chinese companies from US stock exchanges if they did not comply with local auditing rules for three years in a row.

The China Securities Regulatory Commission, the country's top securities regulator, has proposed a joint inspection mechanism over audit firms as a solution, with the latest version of the proposal sent to the US side in August.

The CSRC said the US Public Company Accounting Oversight Board has confirmed receipt of the proposal and would examine it in due course. But, formal talks over the issue have not been announced and regulatory uncertainties remain.

The protracted uncertainties have propelled the string of secondary listings on the Hong Kong bourse of US-listed Chinese firms such as JD and NetEase in June.

By virtue of easy and clear market access and similarities with the US stock markets, Hong Kong by far has become the main destination for US-listed Chinese firms seeking shelter closer to home.

In contrast, the mainland A-share market has only seen the re-listing of chipmaker Semiconductor Manufacturing International Corp or SMIC in July, after it delisted from New York last year.

But a lot more cases should come out at a fast clip.

On the one hand, improvements in listing rules at mainland bourses have paved the way for US-listed Chinese firms to return home for re-listing, with the channels proven to be smooth by several initial public offering cases for red-chip firms this year.