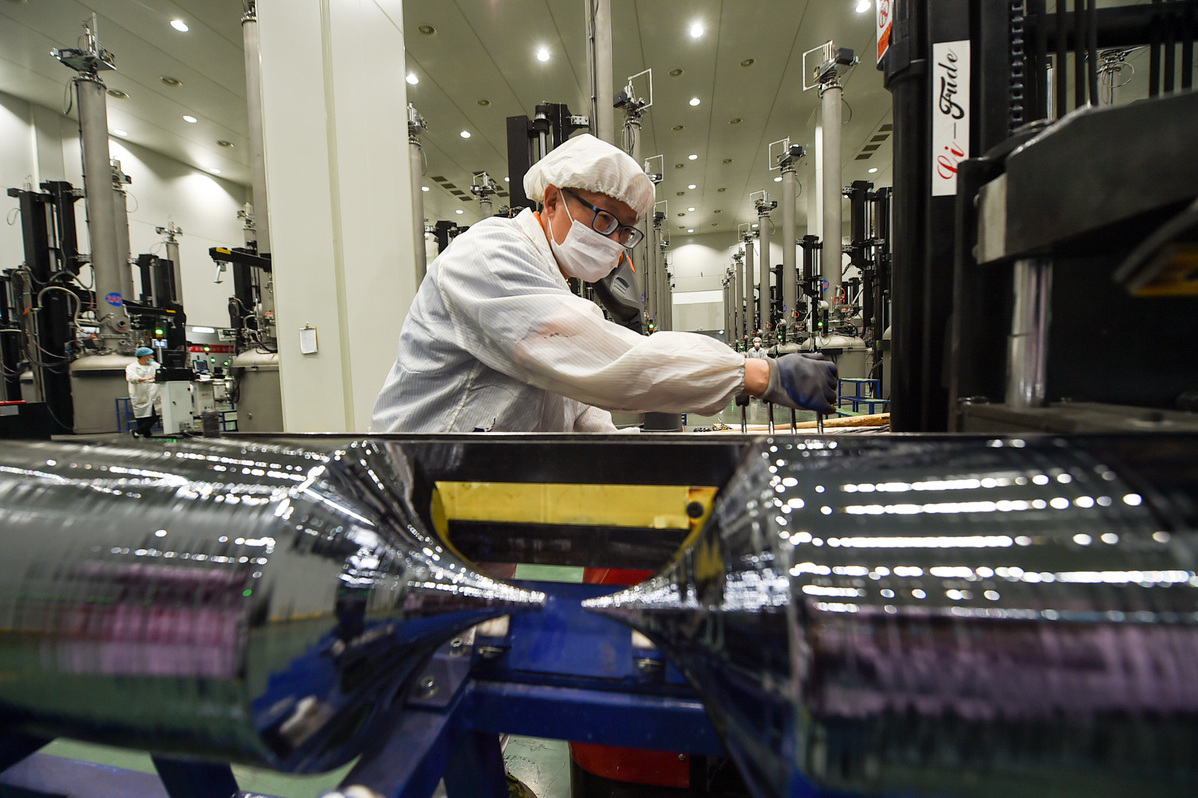 An employee works on the production line of a new material manufacturing plant in Baotou, the Inner Mongolia autonomous region, on Thursday. [Photo/Xinhua]

Factory activity in China gained ground in March, after a slump in February, as government measures to reboot the economy helped enterprises weather the novel coronavirus storm, according to official data released on Friday.

The country's total added value of industrial enterprises above a designated size went down by 1.1 percent on a yearly basis in March, 12.4 percentage points lower than the decline seen in the first two months, while industrial value rose by 32.13 percent in March on a monthly basis, said the National Bureau of Statistics.

"The industrial recovery has also been helped by the demand revival in downstream markets."

Among the 41 industries surveyed by the NBS, 16 sectors witnessed annual increases in their value-added industrial output, while others saw declines.

The steady growth was seen in high-tech manufacturing, which rose 8.9 percent on a yearly basis, with output of computers, telecommunications equipment and other electronic equipment increasing by 9.9 percent.

"Though sales declined in February, we saw growth in January and March, which helped maintain an expansion in the first quarter," Yu said. The company has taken a string of measures like mandatory temperature scanning and compulsory mask wearing to safeguard the health of its employees.

Yu expected revenue from its consumer business group, which includes smartphones, personal computers and tablets, to grow fast in China this year, despite the COVID-19 epidemic.

Experts said Chinese companies are gradually returning to normal operations with the help of government measures, despite the downside pressure.

"Industrial production has been restored to a level which is basically the same as last year," Zhang said.

Ying from China Minsheng Bank said pressure on the economy may concentrate over the next quarter and external headwinds may intensify, as the coronavirus epidemic is spreading globally.

"Despite the economic rebound, the country still needs to be better prepared in the next few months to one year to deal with the epidemic impact. The government should continue to take measures such as promoting economic restructuring and boosting the internet economy to hedge against the risks," he said.

Ying said, due to the epidemic, industrial enterprises are facing new problems such as insufficient external demand, drop in orders and rising costs.

"China's economy needs to rely increasingly on domestic demand instead of external demand to sustain growth. Meanwhile, it also needs to accelerate the push for moving up the value chain and cut its traditional reliance on low-end goods output," said Ying.