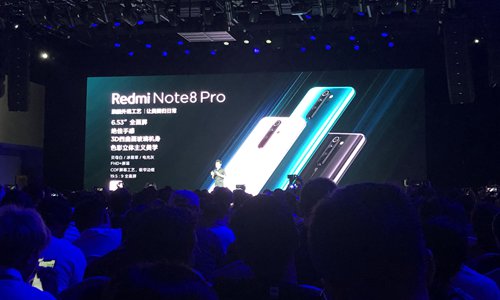 Redmi, one of the two-brands of Chinese smartphone vendor Xiaomi, unveiled its Redmi Note 8 and Note 8 Pro smartphones in Beijing on Thursday, at a time when the global smartphone market is lackluster.

Based on its Note 7 series, the Redmi Note 8 has been upgraded and now has four cameras, with the main camera reaching 48 megapixels. It comes with a new Qualcomm Snapdragon 665 processor and supports fast 18W charging.

The Redmi Note 8 Pro smartphone features a 64-megapixel camera, which has a zoom function. It might be the highest pixel level among smartphone cameras so far, said Xiaomi Vice President and Redmi CEO Lu Weibing during the launch event.

The brand also debuted its first TV during the event, the Redmi TV, which has a 70-inch screen. And it added a new laptop to its existing product line, the RedmiBook 14 Pro.

"With the era of 5G coming, television will be the next battleground for the industry," said Lu.

Redmi has operated independently from its peer brand Xiaomi since the beginning of the year, with the former focusing on higher price-performance ratios while the latter targeting at the middle- and high-end segment. Launched in January, the Redmi Note 7, the first product of the new brand, saw its global sales volume reach 20 million units as of June 30, according to Lu.

Global sales of smartphones declined by 1.7 percent in the second quarter of 2019, totaling 368 million units, according to a report by Gartner released Tuesday.

Huawei, Xiaomi and OPPO were in the top five rankings in terms of sales in the quarter, with market shares of 15.8 percent, 9.0 percent and 7.6 percent, respectively.

Among the top five countries in smartphones sales, China held the No.1 position with 101 million smartphone sales in the second quarter of 2019, up 0.5 percent year-on-year.