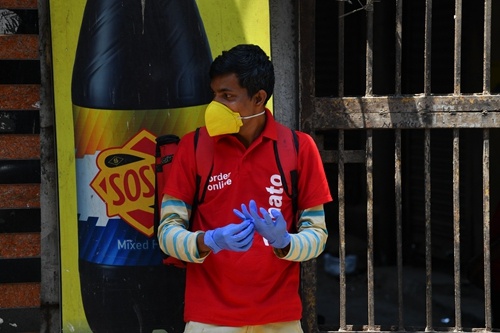 A food delivery worker for online app Zomato dons gloves during a government-imposed nationwide lockdown on Sunday as preventative measures were launched against the COVID-19 coronavirus in Mumbai. (Photo: AFP)

Amid border tensions with China, the Indian government has launched a campaign to boycott Chinese apps and investments, which has seen more than 100 Chinese apps banned in the country, and left future of several Chinese investments on Indian unicorns up in the air.

But the boycott of Chinese technologies and capital will deal a blow to India's e-commerce sector, as some companies including Zomato - an Indian food-delivery platform - have already felt the pain, Zhao Gancheng, director of the Center for Asia-Pacific Studies at the Shanghai Institute for International Studies, told the Global Times on Wednesday.

According to Zhao, the case of Zomato - which faced financial pressure this year after an investment deal with Chinese fintech company Ant Financial Group was put on hold - is a typical result.

"So, except for investors from China, it's not easy for India to find other investors who have abundant capital while also holding internet technologies," Zhao said.

A video featuring India's food deliverers - Dabbawalas, a group of about 5,000 people who can deliver nearly 200,000 orders every day without modern technology such as online ordering system with an extremely low error rate - went viral on Chinese social media and sparked Chinese discussions.

In the video, named Indian riders: 5, 000 deliverers send 200,000 packs of food, each Dabbawala can deliver about 40 orders every day from clients' families or restaurants to their offices with a very low error rate and delay rate without assistance of modern technologies. There would only be one missing pack every 16 million packs.

According to the video, the system behind their accuracy and punctuality, which has existed for more than 120 years, is very simple and unique - only a code consisting several letters, numbers and symbols. And Dabbawalas would easily find their destinations following these simple codes.

Dabbawalas' unique system sparked hot discussions on Chinese social media Weibo with some surprised Chinese netizens saying, "[It is] really without any modern technology? or is it saying that each country has its own miracles?"