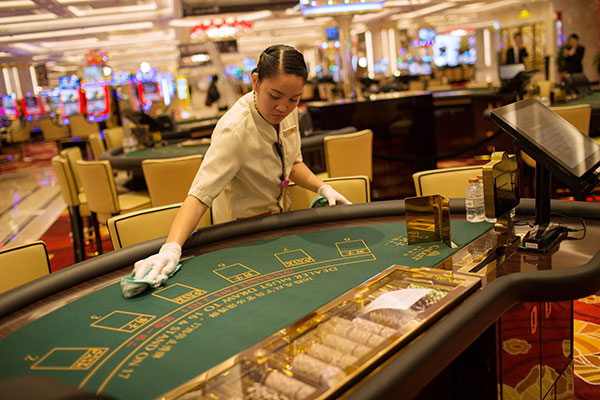 In the two decades since Macao's return to the motherland, its financial industry has achieved robust growth and cultivated its own strengths in several areas, which have become a new foundation of the city's future economic development.

The gaming mecca has been dedicated to diversifying its economic structure in recent years to counter the risk of overreliance on a single industry and thus ensure sustainable development.

Ye Zhaojia, vice-president of Bank of China (Macao), said the banking sector has made advances over the last 20 years in tandem with the rapid growth of the city's economy.

"This helped establish a professional image among green bond dealers for BOC and the Macao banking sector," he said.

Taking advantage of its ties with Portuguese-speaking countries, Macao set up a Sino-Portuguese commercial service platform in an effort to build the city into a yuan-clearing center among such countries.

So far about 30 banks have joined the initiative and the capital it has handled stood at 130 billion yuan in 2018.

Macao's financial development is expected to receive another shot in the arm soon. The Monetary Authority of Macao recently unveiled an intention to set up an offshore yuan-denominated stock exchange.

Nearly 85 percent of the local government's revenue comes from the gaming industry and employment in casinos and related sectors accounts for one-third of its total workforce, Yu said.

He said Macao's free and open trading environment offers a solid foundation to develop such a stock exchange, and its Portuguese and continental European law-based legal system is appealing to capital and companies from Europe and South America, differentiating it from Hong Kong's stock market, which attracts mostly British and United States investment.

"Our goal is to cultivate the financial sector to become another pillar of Macao and propel an appropriate level of diversified economic development," said Monetary Authority of Macao Chairman Chan Sau-san.

Chan said innovation in the Greater Bay Area infuses new growth momentum into Macao's financial sector and encourages players in the industry to take advantage of a historical opportunity.

In February, the central government ironed out a blueprint of the area's integrated development and it supports Macao in developing a China-Portuguese speaking countries platform for financial services, an export credit insurance system, a yuan clearing center for Portuguese-speaking countries and a Macao-Zhuhai cross-boundary financial cooperation demonstration zone.

In addition, digital payment－such as through WeChat Pay and Alipay－is increasing in popularity across Macao. In the first three quarters of this year, mobile payment transactions reached 506.6 million yuan, six times the amount in all of 2018.