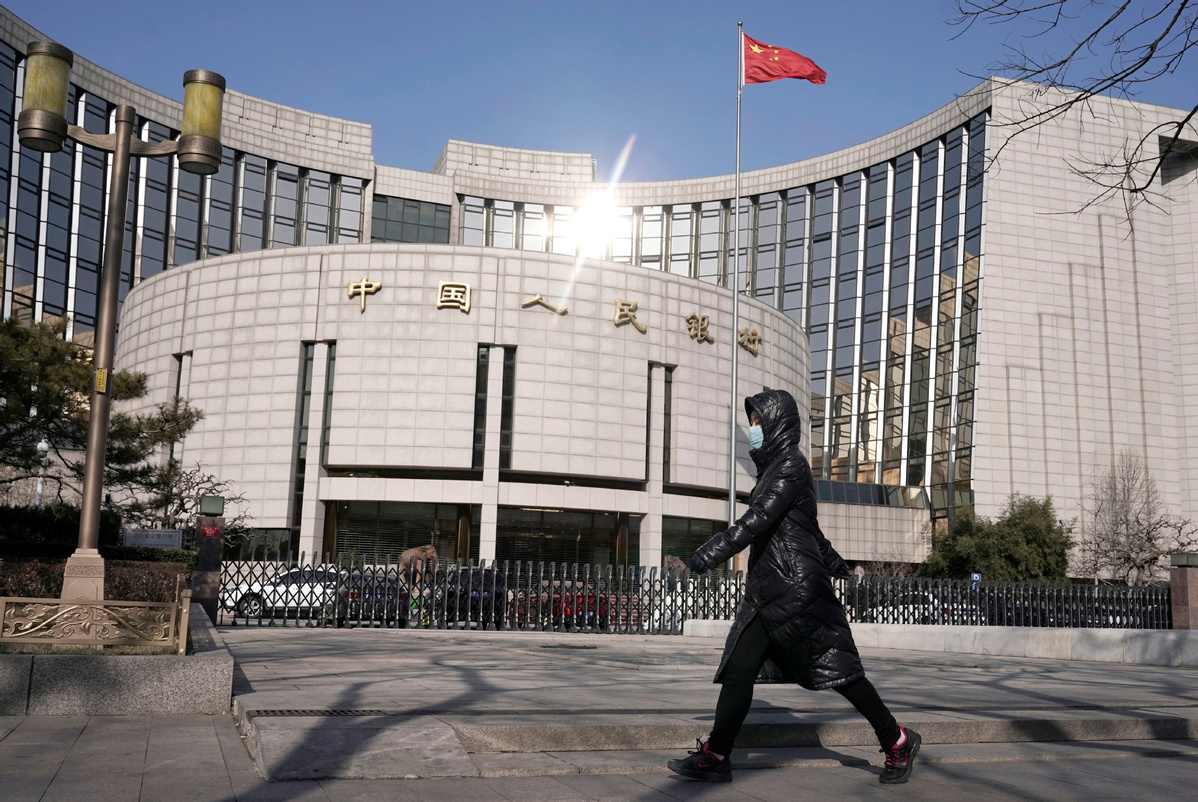 A woman wearing a mask walks past the headquarters of the People's Bank of China, the central bank, in Beijing, China, Feb 3, 2020. [Photo/Agencies]

The People's Bank of China, the central bank, said on Thursday that it would make targeted cuts to the reserve requirement ratio, or the amount of cash that banks need to set aside as reserves, to ensure sufficient liquidity and increase credit to small businesses affected by the novel coronavirus outbreak.

The next step to support the corporate sector is to inject more long-term capital, through target reduction of the reserve requirement ratio in a special group of banks which have lent a certain amount of credit to small-and medium-sized enterprises, said Liu Guoqiang, vice-governor of the PBOC.

"The prudent monetary policy will focus more on supporting economic growth, which will be more flexible and moderate," he said.

The central bank added a 500 billion yuan ($71.25 billion) quota of re-lending and rediscounting for banks, following the issuance of a 300 billion yuan re-lending fund earlier this month, a statement on the PBOC website said. The interest rate for re-lending to agricultural entities and SMEs has been cut by a further 0.25 percentage point, down to 2.5 percent.

Regional banks, which issue new loans to small and micro enterprises at a relatively lower level－no more than the loan prime rate (LPR) plus 50 basis points by the end of June－can apply for re-lending funds that are equal to the amount of the loans, according to the PBOC.

The announcement followed requirements of a top-level meeting on Sunday, which urged balancing epidemic control work and economic stabilization. Those at the meeting called for steps to promote production resumption and reduce financial difficulties for SMEs.

The re-lending and rediscounting fund will be used to support production resumption, focusing on agricultural, foreign trade and service industries, such as tourism, catering and transportation. The extended credit will help the companies repay debt, turn over capital and increase investment, according to the PBOC statement.

"In the near term, the PBOC's move could further reduce interbank rates and risk-free bond yields," said Lu Ting, chief economist in China at Nomura Securities. But he was concerned consumer inflation pressure may rise, and it could make the stock market even more buoyant.

"We expect Beijing to further ramp up its policy support for SMEs and low-income individuals. We also expect some other easing measures in the coming months to boost final demand and stabilize market sentiment," Lu said.

The government has urged State-owned large commercial banks to achieve a 30-percent year-on-year growth in their outstanding loans to SMEs in the first quarter, and lower the loan rates for SMEs from the level in the previous year, some officials from the banking regulatory body said earlier.

Other measures will be introduced to reduce financing costs for companies, including driving down the loan prime rate (LPR)－the new benchmark lending rate, and facilitate re-lending and rediscounting at an appropriate time, according to PBOC Vice-Governor Liu.

Starting from March, already-issued loans that have not expired will shift the traditional lending rate to LPR, which means the LPR reform will continue following the schedule set before, in spite of the epidemic, Liu said.

Medium-and small-sized commercial banks, which have liquidity and capital adequacy pressure, will get supportive policies to ensure that they have ample funds to lend to corporates, he said.