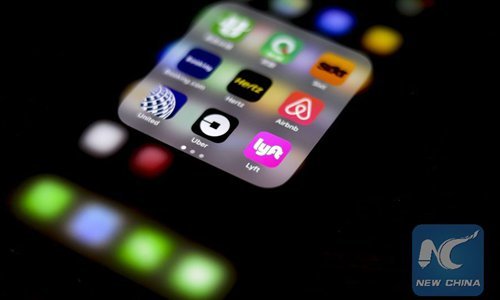 Photo taken on Aug. 8, 2018, shows the Uber and Lyft Apps on an iPhone in New York, the United States. (Photo: Xinhua)

An online statement from the State Administration for Market Regulation revealed the draft rules on Tuesday, including detailed information disclosure requirements.

The public have until November 30 to comment on the draft rules.

Online platform operators risk falling foul of the draft anti-monopoly rules if they collect or exchange sensitive business information (such as prices or sales) to manipulate the market, boycott transactions, fix prices or limit new products and services, according to the items listed in the "Horizontal Monopoly Agreement."

The Vertical Monopoly Agreement would punish platform operators that fixed resale prices or minimum resale prices through methods such as data and algorithms, the draft said.

Other risky behavior on online platforms includes operators unreasonably adjusting sales prices out of step with cost changes - for example implementing a price hike that's significantly higher than the increase in cost, according to the draft.

Monopolistic operators have the unfair ability to adopt different trading prices based on privacy information, transaction histories, individual preferences and consumption habits that are obtained by platforms' big data and algorithms, read the draft.

The guidelines are a reaction to the boom in the online platform economy and the fact that it has caused several unsustainable situations, such as carving up market share, manipulating prices, and the implementation of malicious business models, according to the guidelines.

In an era in which customers obtain not just basic necessities online, but also financial loans, gaming and live video streaming, anti-monopoly regulations have become increasingly significant, enabling the platforms to prioritize customers' interests and improve the online environment.

"For example, some online platforms have pushed down the price of goods in a bid to carve up bigger market share at the expense of merchants' diminishing profits, which poses a threat to industry development," Xiang Ligang, director-general of the Beijing-based Information Consumption Alliance, said on Tuesday.

Anti-monopoly agencies will encourage relevant business operators to proactively report evidence according to the horizontal monopoly agreement. Doing so will not just prevent suspected violations, but mitigate wrongdoing and see penalties waived for business operators who meet the requirements, said the draft.

"Many Internet companies 'huddle together for warmth' to survive the fiercely competitive environment and lack of funding, market share and technology, which explains the different factions in the Internet industry," an employee at an Internet company told Global Times.

"It's inconvenient to talk about the monopoly issue or even content related to other Internet companies, as one of my colleagues was reported," another interviewee working at a video company told Global Times.