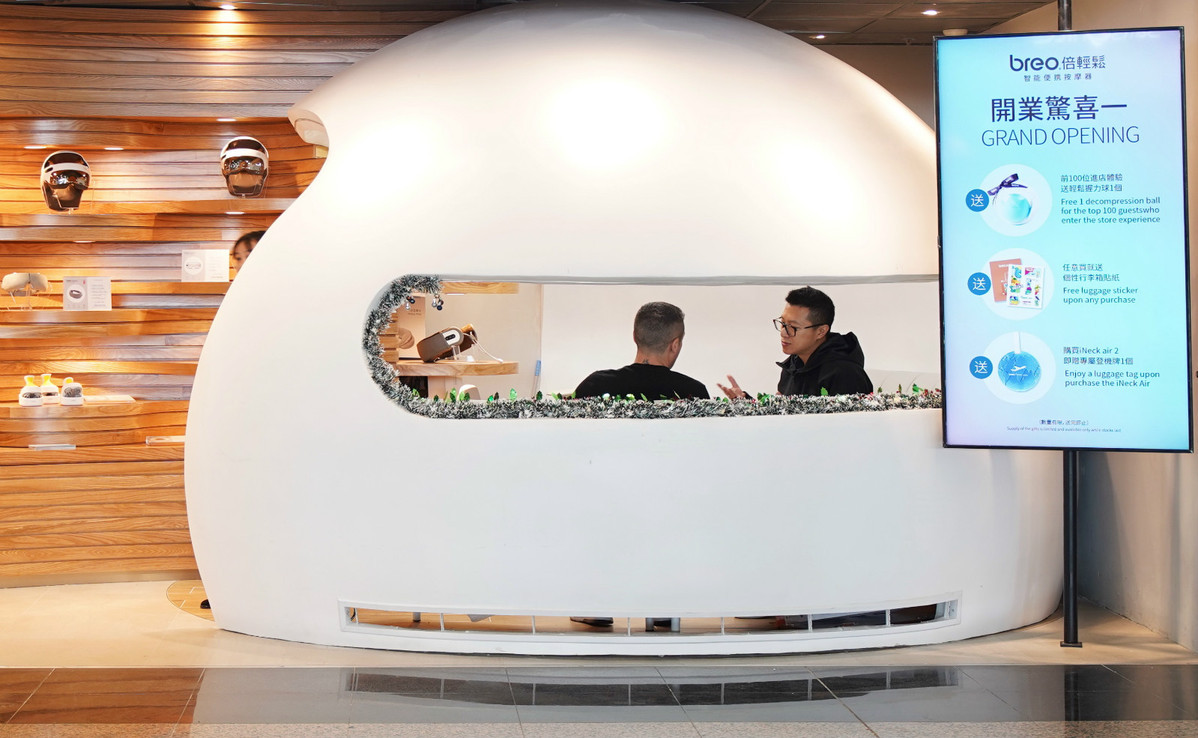 A salesman of Breo (right) introduces products to a consumer at a store of the portable massage equipment maker at Hong Kong International Airport. Breo has built an extensive distribution network across more than 70 countries and regions. (Photo provided to China Daily)

The design and looks of Breo massage equipment may lead users into believing it is an imported brand. But Breo is a Shenzhen-based company that has been specializing in portable massage devices for 20 years now.

International awards over the past few years－iF Design award in 2019, reddot design award winner in 2015 and Design for Asia Award in 2013－are testimony to the global popularity of Breo products.

According to Guo Di, global brand manager of Breo, such market recognition can be largely attributed to the positioning that the company set for itself from the very beginning.

"We have never defined Breo as a local brand. A globalized brand positioning is what we have adhered to over the past two decades. Therefore, our product research and development as well as our management were all built on the ground rule of internationalization," said Guo.

Breo has not only set up more than 100 physical stores in China, but also built an extensive distribution network across more than 70 countries and regions.

There were more than 50 brick-and-mortar stores in South Korea during peak time. It has also set up its own logistics system in South Korea and Russia.

With nearly 10 years of operations in overseas markets, Breo has set up subsidiaries or joint ventures in South Korea, Japan, Malaysia and the United States, which manage the local sales more independently. It is a more efficient way to manage online and offline business channels in respective markets, said Guo.

The exported products have become more premium, and the volume and sales value are expected to further expand in the following years, said Qianzhan analysts.

According to information from the General Administration of Customs, prices of exported massage equipment have been rising over the past few years, with the average price rising from $10.06 per unit in 2017 to $12.6 per unit in the first two months of this year. Major export destinations include the United States, South Korea and Japan.

As discovered by Breo, most of its consumers are well-educated, and about 73 percent of them hold a college degree, which is true for both the domestic and overseas markets.

Interestingly, software engineers outnumber all other professionals among the users of Breo products.

While people aged between 28 and 35 make up the most of Breo users, the company noticed a steady growth of younger consumers aged between 18 and 28 during the pandemic earlier this year.

This shows the users of electronic massage devices are becoming a broad-based group, said Chen Qing, deputy general manager of Breo. Meanwhile, Breo is working on plans to attract more overseas senior consumers aged between 45 and 60 by persuading them to make their purchases online, he said.

Timely adjustments have been made to Breo products in response to the COVID-19 pandemic. The company applied antibacterial materials to all its products in May, and has conducted tests for its products to ensure that they can withstand direct sterilization with alcohol.

Breo's quick response to market changes has improved its sales numbers. Despite temporary turbulence in March, the company started to see a recovery in April. Sales during the Nov 27 Black Friday were much stronger than last year. Online sales revenue doubled during the first nine months of the year.

Lydia Lee, president of public relations firm Weber Shandwick in China, said the pandemic has provided a window for outbound Chinese brands, especially those that seek to change their brand image among overseas consumers.

While quality enhancement is the prerequisite of successful overseas expansion, Chinese brands should deliver universal values as well as the unique values in the Chinese culture.

"Consumers will be more rational after the pandemic. It is thus of greater importance to build a successful brand image," she said.

The outbreak at the beginning of the year posed logistics difficulties to Breo. Some of its products could not be delivered to its customers on time as certain online retailers' warehouses faced overcapacity during the first few months.

Such a black swan incident has somehow made Breo more resolved to set up its own operations in key overseas markets, rather than simply rely on major online platforms.

While high-end brands were highly pursued over the past few years, consumers all over the world will turn to the truly valuable brands after the pandemic, said Humphrey Ho, managing director of media company Hylink for North America.

Therefore, Chinese brands should invest more in brand positioning, retailing and distribution channels when they foray into overseas markets, he said.

As Chen understands, it is necessary for Breo to seek more cooperation with overseas technology companies, universities and medical institutions to integrate the traditional Chinese medicine or TCM knowledge into the company's products.

"We can't simply define ourselves as a domestic brand. We should shoulder more responsibility in conveying the Chinese culture to overseas users," he said.

For Breo, a clear target has already been set with North America and Japan as the center of future growth, according to Chen. It plans to garner 10 percent of the local market share within three years. Instead of seeking international agents, Breo will be in charge of the management of operations in these markets, as "they point to the strategic direction of the company's development", he said.

"There are still a limited number of Chinese brands that are well received worldwide. Health is a universal pursuit. Therefore, it is crucial for brands like Breo to tap into overseas markets to address the need for more customers in the world," said Chen.