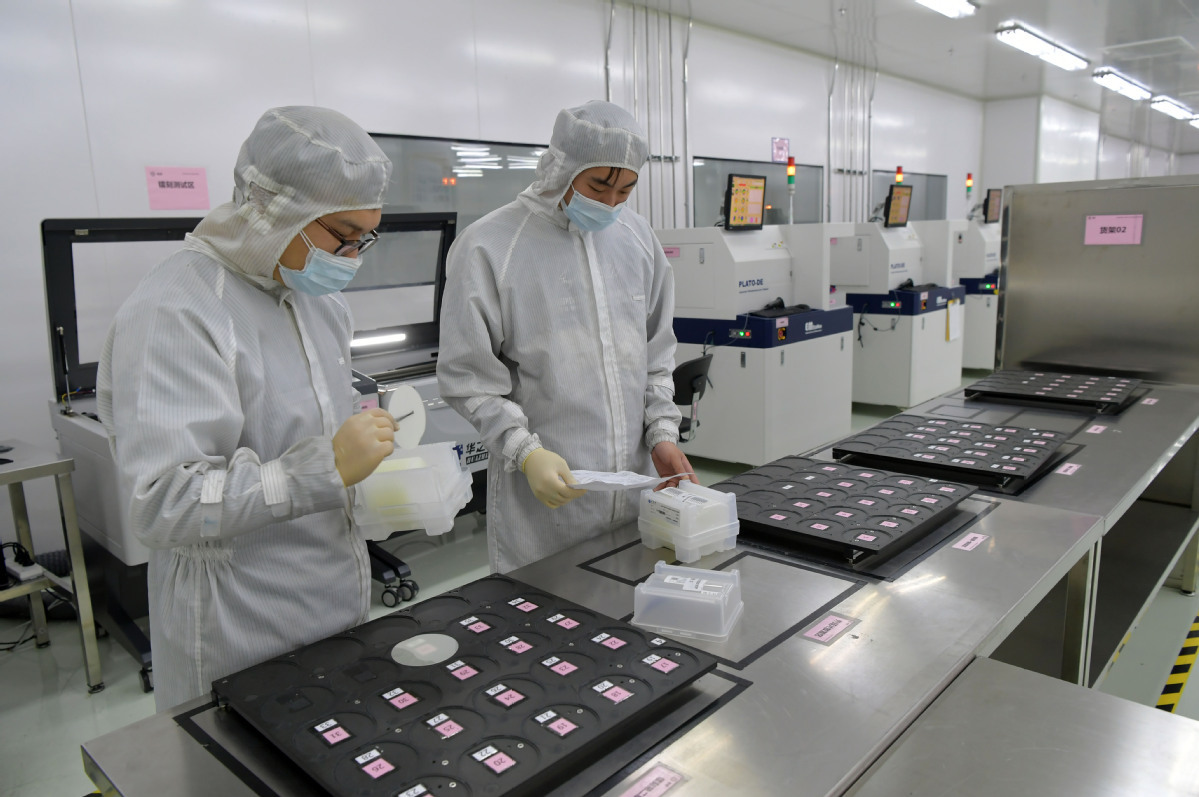 Employees perform tests on semiconductor chips at the production facility of a Nanchang, Jiangxi province-based high-tech company on Feb 13. [Photo/Xinhua]

Investors on the mainland and Hong Kong may soon welcome a wave of public offerings from top Chinese technology firms that are now listed on Wall Street, experts said on Thursday.

The Hong Kong-listed firm said on Tuesday that it will apply to issue shares in Shanghai, after delisting from the New York bourse a year ago.

"The wave of Chinese firms coming home for floats seems to have appeared," said Tan Yunhui, a strategist with the Guangdong province-based Yuekai Securities.

After the Chinese coffee chain revealed sales data fabrication and two other US-listed Chinese firms were accused of doing the same, regulators in the United States warned about the risk of incomplete or misleading disclosure from Chinese firms late last month.

The market condition faced by Chinese firms in the US can also worsen due to the global novel coronavirus pandemic and uncertainties about China-US trade friction, Tan said.

Previously, the strict listing requirements and lengthy IPO process on the mainland had forced many Chinese tech firms to consider floats in the US. But this obstacle has largely eased as capital market reforms deepened, said analysts.

Also last month, China loosened the threshold for innovative red chip companies－firms registered overseas but operating domestically－to get listed in the mainland, by virtue of which SMIC is eligible for a domestic listing.

As the reform efforts attract more overseas-listed Chinese tech firms to go public in the mainland, domestic investors will welcome more high-quality investment targets, said Dong Dengxin, director of the Finance and Securities Institute at the Wuhan University of Science and Technology.

"This will matter a lot for improving the quality of listed firms, as the mainland market lacks the participation of new-economy giants but is dominated by firms in traditional industries," Dong said.

Analysts said the relisting of leading Chinese tech firms in the mainland and Hong Kong will also help bring about more market liquidity and lift the valuation level of related sectors.

Wang Jiyue, an independent investment banking analyst, said that the Hong Kong market may attract more floats from US-listed Chinese firms, especially large-cap ones, as the registration-based reform on the mainland is still on trial.

Some Chinese firms may still prefer the US as an IPO destination, Wang said, adding Kingsoft Cloud Holdings Ltd may have chosen the US out of the parent company's ambition of cross-market layout.

The Xiaomi-backed cloud services provider is set to debut on Nasdaq on Friday, the first Chinese listing after the Luckin fiasco.