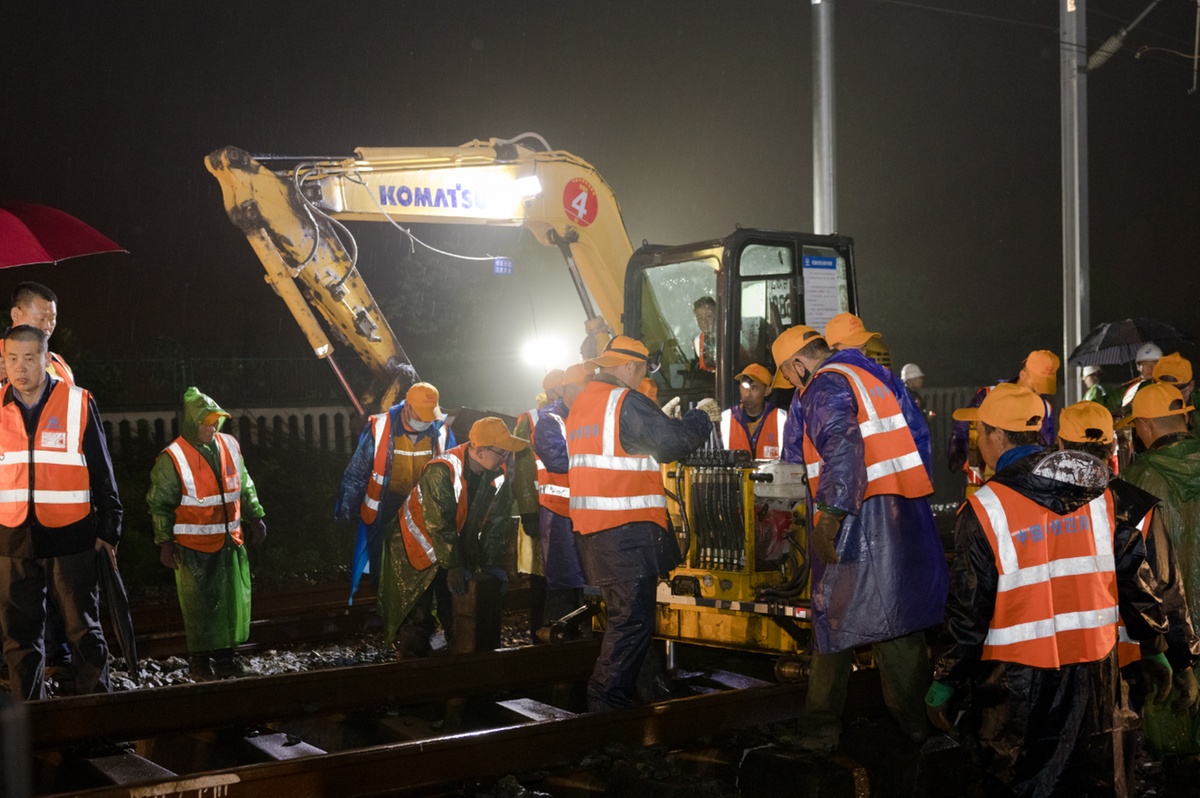 Workers from China Tiesiju Civil Engineering Group shift a section of the Shanghai-Chengdu high-speed railway to a new place to make way for a 200-meter-wide waterway on Tuesday. (Photo: China Daily)

A 324 million yuan ($49.8 million) reconstruction and high-speed railway diversion project, the first of its kind in China, was accomplished in Hefei, Anhui province, on Tuesday.

Some 1,000 builders from China Tiesiju Civil Engineering Group, a State-owned company, relocated a section of the high-speed railway running between Shanghai and Sichuan province's Chengdu, to make way for a water diversion project in East China.

Zhang Xinyi from CTCE Fourth Engineering Co Ltd, which executed the project for CTCE, said the water diversion project between the Yangtze and Huaihe rivers aims to improve urban and rural water supply in Anhui province and neighboring Henan province, and boost shipping between the two rivers.

With the new railway line running more than 10 meters above the ground, the water diversion project between China's longest river－the Yangtze, which traverses through southern Anhui for some 400 kilometers－and the Huaihe River, which runs through northern Anhui, can now run a 200-meter-wide waterway beneath the new line, said Liu Chuanghui from CTCE Fourth Engineering.

CTCE builders made use of a seven-hour period between 10:30 pm on Monday and 5:30 am on Tuesday, when no high-speed trains were running on the line, to divert one part of the railway to its new location.

Officials concerned said the operation involved complex tasks like stripping and sawing of the railway lines, shifting them in quick time, transfer of the catenaries, and ballast and machine tamping works.

From March 2019 to March this year, CTCE staff members from civil engineering, signaling, catenary, track, protection and fine-tuning departments had worked in clockwork precision, coordinating the constructing of a double-track high-speed railway several meters north of the existing line. This helped ready the section for relocation, Liu said.

"Today's diversion cut off one section of the railway line and connected its two ends with the new line built earlier, and also tore off the old section."

Dramatic scenes were witnessed toward the end of the seven-hour relocation operation. Safety officer Yang Hao blew a whistle and alerted staff: "In 10 minutes, a train will depart from Hefei South Railway Station for test running."

That was enough to make on-site operators stop their work, check all machinery and materials one last time and examine the whole project site.

At the crack of dawn, around 6 am, builders vacated the site in an orderly manner, making way for a test run of an inspection train. That marked the successful transfer of the railway line.

During the connection work Tuesday morning, more than 840 sets of mechanical equipment were used, Zhang said.

"A 200-meter-wide waterway needs to pass underneath the Shanghai-Chengdu high-speed railway. The existing line isn't able to meet the waterway's navigation demand, necessitating a relocation," he said.

Construction of the water diversion project between the Yangtze and Huaihe rivers began on Dec 29,2016, and the project was to be completed in six years, entailing overall costs of 91.27 billion yuan ($14.07 billion). It is expected to be completed this year.

From south to north, the project is divided into three sections: water diversion from the Yangtze to Chaohu Lake in central Anhui; a canal link, and northbound water transmission. The total water transmission line runs 723 km, Zhang said.

The railway lines span 1,985 km in all and are expected to become fully operational in 2023 with trains reaching speeds in the range of 160 km/h to 350 km/h.

The section that traverses the Yangtze-Huaihe Rivers Diversion Project is the busiest: 122 trains run on this stretch every day, said Zhou Qingyong, deputy general manager of CTCE Fourth Engineering and project manager of the high-speed rail reconstruction project.

"With the smooth transfer of the new line, the digging of the waterway will start soon, and it helps complete the water diversion project on time," he said.

"I am really proud of taking part in this construction work. It's intense but we've accomplished the job. It will help lay a solid foundation for the economic and social advancement along the railway line," said Ma Chunli from CTCE Fourth Engineering.