Carlos Ghosn's momentous years at the helm of Renault came to an end Thursday after the carmaker's board replaced him with two heavy-hitters from the French auto industry. 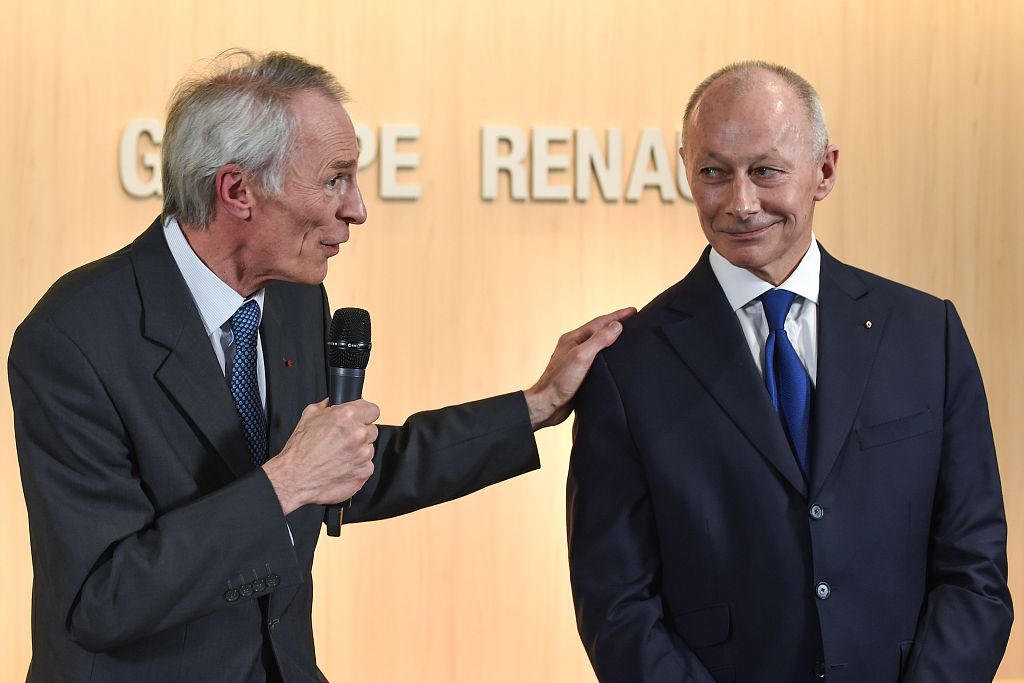 French carmaker Renault's newly appointed board chairman Jean-Dominique Senard (L) delivers a speech next to new chief executive Thierry Bollore during a press conference at the headquarters of the French car manufacturer Renault in Boulogne Billancourt, near Paris on January 24, 2019. (Photo: VCG)

Ghosn held both the CEO and chairman roles, as well as leading the powerful Renault-Nissan-Mitsubishi alliance, when he was arrested in Japan in November and accused of financial misconduct at Nissan.

Renault named Thierry Bollore and Jean-Dominique Senard to take over the CEO and chairman jobs.

Thierry Bollore, the new CEO, has been running Renault on an interim basis in the wake of Ghosn's stunning arrest.

The 55-year-old was an obvious choice, having been seen as Ghosn's anointed successor since last February when he was named chief operating officer.

A keen sailor from France's northwest region of Brittany, the discreet father of five has spent his entire career in the car industry, mostly in Asia.

Like Ghosn, he got his start at French tyre giant Michelin.

"I think that his knowledge of Asia and his skills in relationships with the Japanese will give him an advantage," the former colleague said, praising Bollore's "calm, analytical qualities".

Business development in China is a priority for Renault as well as the complex coalition with the French company's Japanese partners Nissan and Mitsubishi.

Bollore held senior posts with Michelin in Japan and Thailand in the late 1990s before moving to China with Faurecia.

He took other senior roles with the parts maker in Europe and South Africa before joining Renault in 2012 to take charge of manufacturing and supply chain management.

He has been viewed at Renault as someone who upped the competitiveness of the company's factories as well as embracing digital transformations.

He is a distant cousin of French industrialist Vincent Bollore, who until last year was chairman of the media and entertainment giant Vivendi and remains its largest shareholder.

Jean-Dominique Senard, the new board chairman, will give a whole new meaning to the expression "when the rubber hits the road": he arrives at Renault fresh from his role as CEO of Michelin.

The 66-year-old, who has worked for the world's second-largest tyre manufacturer since 2005, had been due to hand over the top job to his deputy Florent Menegaux in May.

He was the first non-family member to head the historic company that spawned the Michelin food guide.

With a ready smile and elegant attire, Senard has successfully negotiated difficult labour agreements with trade union leaders in Michelin's French factories to preserve jobs in the face of cheaper imported Asian products.

The group earned high praise at the end of January from French President Emmanuel Macron, who called it a "model company" for its concern for both productivity, training and involving workers in corporate decisions.

A graduate of the top HEC business school in Paris, Senard is the son of an aristocratic mother and diplomat father.

Before working for Michelin he held jobs at energy giant Total along with glass maker Saint-Gobain and the aluminium group Pechiney.