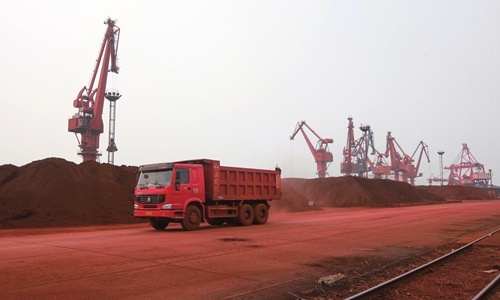 Many countries will find it hard to shake off reliance on China's rare-earth magnets, especially medium-level products, despite some governments' attempts to replace Chinese magnet producers with domestic ones, experts and industry sources said.

Their comments came after some countries and political unions reportedly took action to support their local rare-earth magnet industries, a move that was read by overseas media as being intended to compete with Chineserare-earth products.

According to a Reuters report on Monday, the EU is working on proposals to start local output of a special magnet that is used in making electric car motors. This will be done by offering support to local producers, with measures including cheap financing and compensation for higher raw material costs.

The EU's move is similar to a US House bill put forward in recent days. The legislation gives a tax credit of $20 per kilogram of rare-earth magnets produced in the US.

Certain overseas countries'movesaim to lessendependence on Chinese magnet products, which currently dominate global supplies, as those countriespursue a so-called decouplingtactic, according to experts and overseas media outlets.

China is the EU's largest source of rare-earth magnets, although Japan also exports thosemagnets to the EU. Currently, more than 90 percent of the world's rare-earth permanent magnets are produced in China.

Both experts and industry insiders said it's unlikely that overseas countries can cut imports of rare-earth magnets from China on a large scale, particularly when it comes to medium-level products.

Zhang Anwen, a vice secretary-general of the Chinese Society of Rare Earths, said that China's rare-earth magnets have multiple advantages over overseas ones, including relatively cheap raw materials and labor costs, world-leading technologies such as earth separation, and a wide product range.

This means that even though overseas producers can make magnets using rare-earth materials not sourced from China, it will be more expensive than directly importing from China.

"It's hard to quantify the costs for overseas companies. But surely they will face higher costs in raw materials, labor and other sectors, though their automation levels help offset some of the costs," he said.

Experts also said that although overseas countries will be cautious about importing China-made rare-earth magnets for high-end products,or military/political purposes, they will still hope to buy medium-level products from China.

"Car companies, for example, are very sensitive about purchasing costs, and therefore China-made magnets will be a much-desired choice," Zhang said. Rare-earth magnets are widely used for making electric motors in new-energy vehicles.

"As far as I know, China's rare-earth permanent magnet industry is a hyper-competitive one and does not get any kind of subsidies, " he said.

A manager of a state-owned rare-earth enterprise based in Ganzhou surnamed Yang alsotold the Global Times that overseas companies will need at least five years to compete with Chinese magnet producers.

"The US and Europe lack rare-earth magnet production lines, and it's almost impossible that they can purchase the raw materials for making rare-earth magnets and process them, at least not in the short term," Yang said.

According to Zhang, disrupting the industry structure would hurt multiple parties. But although companies can do little amid the trend against globalization, domestic producers are still confident of a good future.

This is not only because of the expanding domestic market, but also because of the rise of emerging industries like electric cars, consumer electronics products and wind power generation, which fuel demand for rare-earth products, he said.