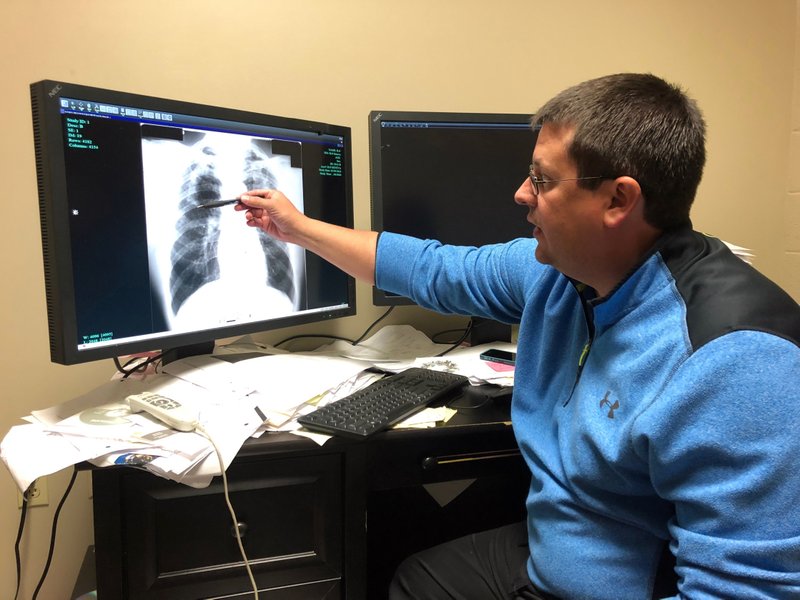 In this Jan. 24, 2019 file photo Dr. Brandon Crum points to the X-ray of a black lung patient at his office in Pikeville, Ky. (Photo: AP)

A cut to the tax coal companies pay to fund a trust for sick miners will cost taxpayers at least $15 billion by 2050, according to a new report from a national watchdog group.

An excise tax rate on mined coal that funds the Black Lung Disability Trust Fund expired at the beginning of 2019 due to inaction by Congress. That led to a reduction in the amount of coal companies pay into the fund, which pays benefits and medical bills for miners diagnosed with black lung disease.

“By failing to extend the excise tax, Congress is shifting billions of dollars in liabilities from coal companies to taxpayers,” said Autumn Hanna, vice president of Taxpayers for Common Sense. The Washington-based group released a report on Tuesday that said the fund’s debt could be as high as $26 billion by 2050.

The US Department of Labor earlier this year confirmed to The Associated Press that a funding shortfall in the Black Lung Trust Fund would be covered by borrowing from the US Treasury.

An excise tax rate of $1.10 per ton of underground mined coal was cut by more than half to about 50 cents in the new year. The fund took in about $450 million in revenue in the fiscal year 2017.

The cut came as a surge of black lung disease scars miners’ lungs at younger ages than ever. Dr. Brandon Crum, who has watched the epidemic unfold at his Pikeville, Kentucky, radiology clinic, said earlier this year that he has seen 200 miners diagnosed with a severe form of black lung disease in less than four years. The nation had 31 such diagnoses in the 1990s, according to the National Institute for Occupational Safety and Health.

Black lung disease, or pneumoconiosis, is caused by inhaling dust in the lungs and has no cure. It has killed about 78,000 miners since 1968.