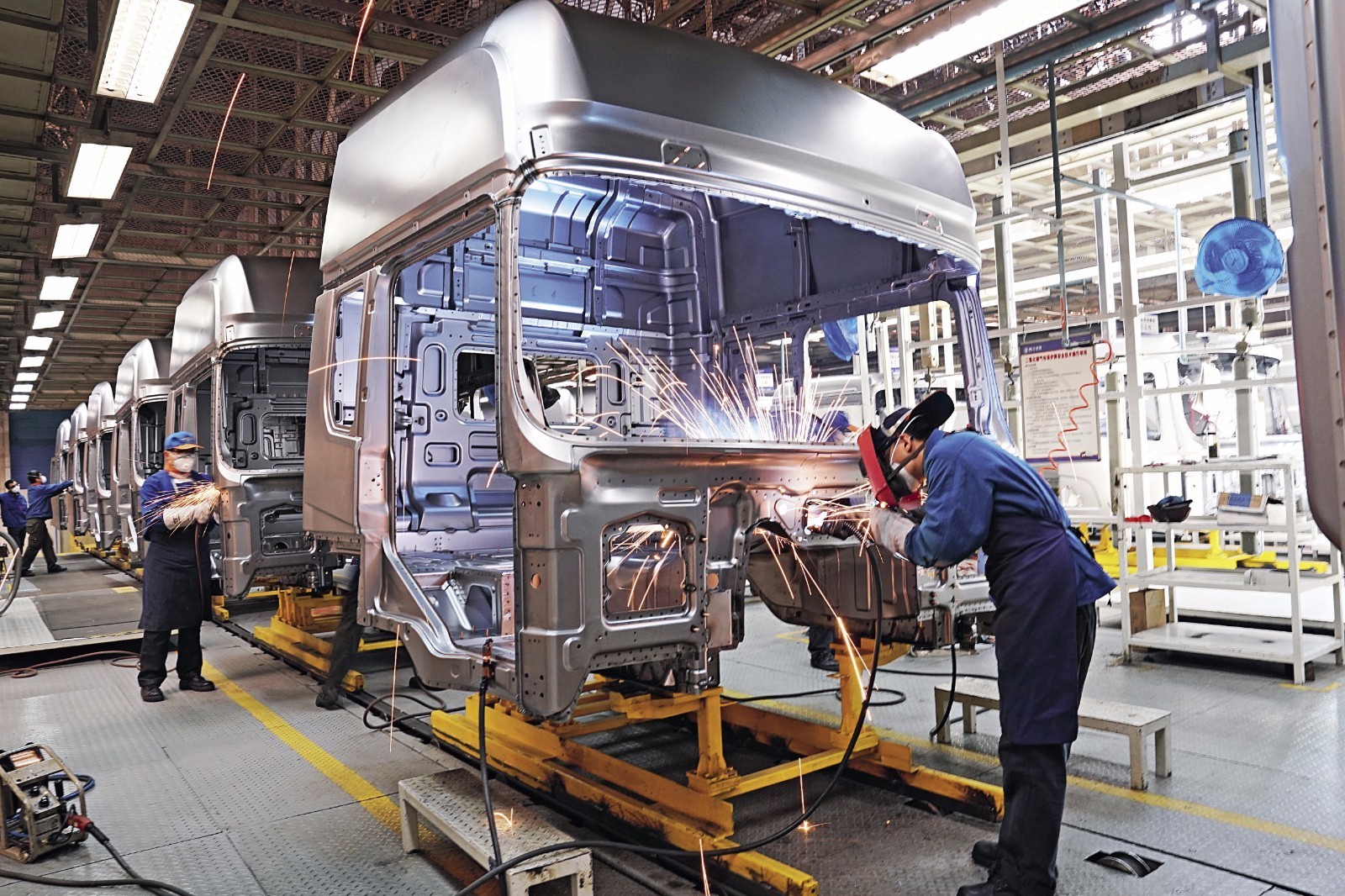 To relieve the impact of COVID-19, our company is active in communication with upstream enterprises of the industrial chain, timely informing them of users' needs," said Zhao Xiaoyang, general manager of Shanghai Fargo Supply Chain Management (Group) Co., Ltd. His company, located at the Yangtze River Delta, is an automobile sales and service company affiliated to Shaanxi Automobile Holding Group Co., Ltd. (SHACMAN). Today, more than 50,000 heavy-duty trucks produced by SHACMAN operate in the Shanghai area, which is an important international gateway for foreign trade and one of the engines of China's economy

SHACMAN, headquartered in Shaanxi Province's capital city of Xi'an, is a large-scale heavy-duty automobile manufacturing company in northwest China and one of the first Chinese companies dealing in export of complete vehicles and auto parts. It has factories in 13 countries with products sold to more than 100 countries and regions. Since SHACMAN restarted its operation on February 14, the factory's production capacity has returned to normal.

The automotive industry has a long industry chain, which has been hit hard by the pandemic. Any hiccup of the industrial chain can trigger the suspension of the whole assembly line. Chairman of SHACMAN Yuan Hongming said, "Our current industrial layout has exempted us from reliance on foreign producers. Engines, gearboxes, axles, frames, and pilothouses are all produced in China." The complete domestic industrial chain has guaranteed SHACMAN the quick and smooth resumption of production in sync with other enterprises of the industrial chain.

As the production capacity of heavy-duty trucks is gradually restored, parts manufacturers have also restarted work, providing strong support for the upstream and downstream enterprises, as well as the construction of key projects and the development of the transportation and logistics industry. Shaanxi Huazhen Vehicle Parts Co., Ltd. is an upstream supplier of Shaanxi automobile industry chain. The company's general manager Yan Feng said, "The production of the first quarter has been greatly thwarted by the pandemic, but it has recovered fast, with a year-on-year increase of 18 percent in April."

Meanwhile, SHACMAN is devoted to innovation and technological upgrading. A newly developed, pure electric light truck has already entered the market, and its new unmanned driving electronic control platform will also be unveiled in the second half of this year.

In Shaanxi, not only has a group of leading automobile companies been formed, but also an industrial cluster of intelligent, networked, green, and intensive automobile companies. As early as 2003, BYD Company Limited acquired local Xi'an company Qinchuan Automobile Co., Ltd. Today, BYD has led the world in many fields including vehicle manufacturing, mold research, model development, and new energy vehicles. BYD's Xi'an branch has also grown into the largest manufacturing base in northwest China. On May 19, BYD announced on its official website that the Han EV, boasting improved safety features, more cruising range, and a longer life "blade battery," will go on sale in Europe.

Tao Lin, vice president of Tesla China's foreign affairs department, said that they expected to reach the goal of producing 4,000 Model 3 vehicles a week in June this year, which means that the annual actual output will exceed the first phase's design capacity of 150,000 units a year. The construction of the second phase of the plant for Model Y vehicles is currently underway.

Tesla ended the first quarter on a surprisingly optimistic note. Despite the ongoing pressures from the outbreak of COVID-19, Tesla has managed to deliver 88,400 vehicles and produce nearly 103,000, according to Tesla's Q1 2020 Financial Report, representing a 40.3 percent and 33 percent year-on-year increase respectively. This also sets the company's best sales record since its establishment.

As the first wholly foreign-owned automobile factory after China lifted restrictions on foreign investment in the automobile industry, the plant was built, went into production, and began delivering vehicles in the same year of 2019.

"Major projects play a pivotal role in ensuring a steady growth of industrial investment and the high-quality economic development," said Lü Ming, deputy director of Shanghai Municipal Economic and Informatization Commission. To make the rapid process of establishing the Tesla plant a new normal in Shanghai, the commission summarized Tesla's experience, making it replicable and widely applicable to investment promotion, examination and approval reform, as well as corporate services for other big projects operating in Shanghai.

To further promote the approval model, which has been applied in the Tesla project, on March 12, the Lingang administrative commission released an implementation plan for creating a world-class business environment in the Lingang New Area of the China (Shanghai) Pilot Free Trade Zone. It was reported that in the first quarter of the year, the Lingang new area has seen an investment of over RMB 71.3 billion with its newly signed manufacturing projects.

On April 10, the Shanghai municipal government released Shanghai's Several Measures on Implementation of Opinions of the State Council on Further Proper Utilization of Foreign Investment, which is referred to as "24 specific actions." Jiang Ying, a member of the 13th National Committee of the Chinese People's Political Consultative Conference (CPPCC) and vice president of Deloitte China, said that the Foreign Investment Law of the People's Republic of China that was put into operation on January 1, has lowered the threshold for foreign enterprises to enter into the Chinese market within the framework of the law; while the "24 specific actions" help to solve the realistic problems that foreign investors may encounter when they start a business in Shanghai. An example would be how to attract and maintain talented staff and how to protect intellectual property rights.

In order to continuously improve the services for foreign investment and create a stable, transparent, and predictable investment environment for global investors, Shanghai has set up a "Foreign Investment Promotion Service Platform," on which the 2020 Shanghai Foreign Investment Guide was released, giving a comprehensive introduction and guidance to nine major sectors selected from the modern service industry, strategic emerging industry, and advanced manufacturing industry.

Manufacturing is the lifeblood of the national economy. As epidemic prevention and control become normalized, China's manufacturing industry has returned back to its normal track, thus ensuring the stability and competitiveness of the industrial supply chain.

China's complete upstream and downstream industrial chain and the advantage in industrial clusters are another reason to attract multinationals and local companies. For example, China covers the entire automobile industrial chain. This is not available in other emerging markets or small-scale developed economies.

The China "super network" in terms of hardware and software infrastructure, helps to improve the overall operating efficiency of enterprises too. Infrastructure, such as high-speed rail, is constantly improving. As of the end of 2019, the operating mileage of high-speed rail in China exceeded 35,000 kilometers, accounting for about 70 percent of the global network. What's more, the layout of a "new infrastructure" including those about 5G technology in China will also help accelerate industrial upgrading, promote entrepreneurship and employment, and inject new momentum into the Chinese economy.

In addition, the huge talent pool and continuously increasing R & D investment have also helped the transition from the traditional "demographic dividend" to the "engineer dividend" in China. Richard Freeman, a professor of economics at Harvard University, pointed out that the rapid development of China's economy over the past two decades has benefited from its higher education, which has given China a comparative advantage in science and engineering, and allowed China's leading companies in e-commerce and 5G network technology to succeed globally. According to the data released by the World Intellectual Property Organization on April 7, China applied for 59,000 patents in 2019, the highest number globally, accounting for 22.2 percent of the world total. All these achievements have laid a solid foundation for further transformation and upgrading of the country's manufacturing.

In the post-pandemic era, the resilience showed by China's manufacturing industry will be bound to shore up the economic recovery of China and even the world at large.