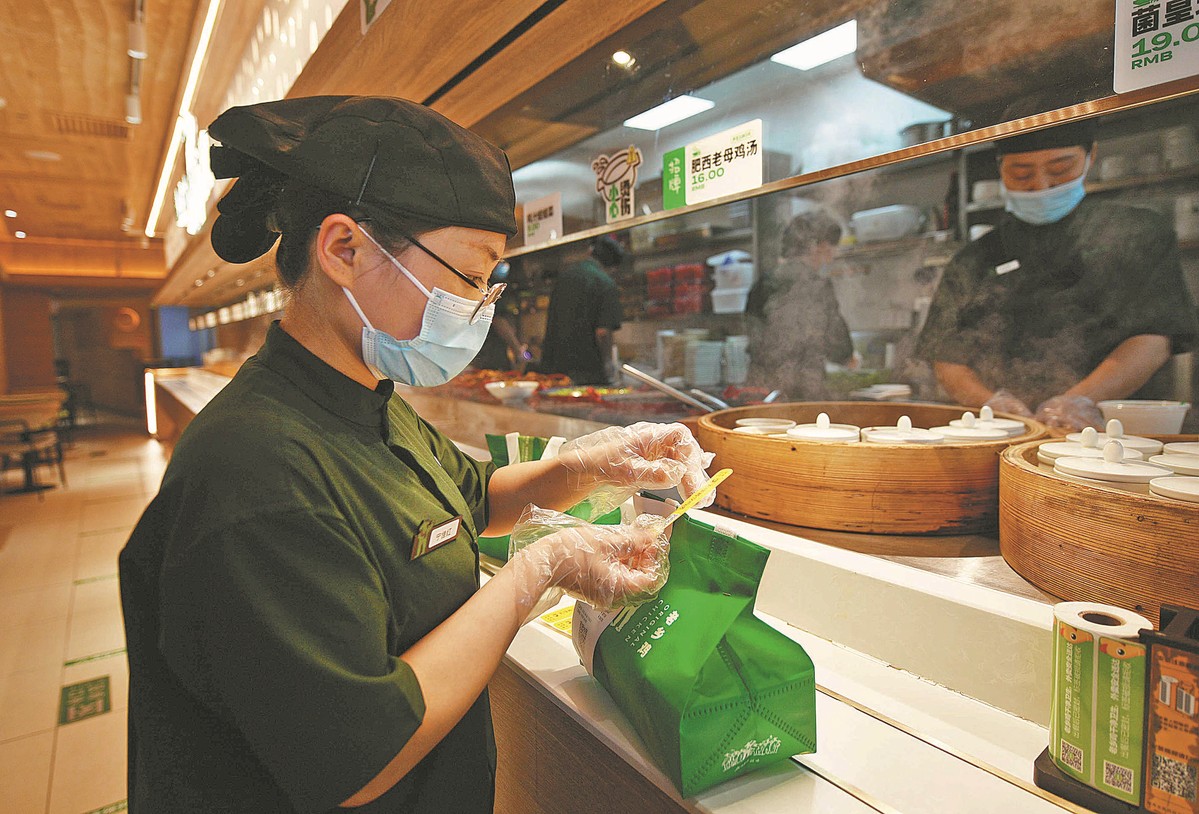 A fast-food restaurant worker seals up a takeout order in Beijing in April. [Photo by Yuan Yi/for China Daily]

In front of a rolling camera, Liu Chaoran introduces crayfish dishes while reassuring the viewers of their quality and encourages them to stock up.

Liu is the media director of Beijing's Huda Restaurant, which is famous for its crayfish. The restaurant has turned to livestreaming to reach consumers remotely as COVID-19 continues to affect the city, according to a report published on news website people.com.cn.

Huda is among legions of food and beverage businesses that are seeking a new revenue stream by giving themselves a digital boost.

According to a China Hospitality Association survey of 100 F&B companies, 90 percent of the companies saw year-on-year decreases in turnover and 28 percent of them recorded a drop of more than 80 percent from April to mid-May.

Restaurants in Beijing coped with the city's recent suspension of on-premise dining by adopting methods such as offering takeouts and selling via livestream. These have become must-have skills for today's restaurants, Zhang Shengtao, director of operations at Huda Restaurant, told people.com.cn.

Hotpot chain Haidilao has connected its branches that are qualified to offer takeout services with people from its WeChat mini program and third-party delivery platforms, according to Li Yu, who is in charge of Haidilao's operations on the Chinese mainland.

"The plan is that once our restaurants in a city or region are unable to offer dine-in services due to COVID-19, they will be able to move all their operations online. This gives them the flexibility to make swift changes to their operations when necessary,"Li was quoted as saying by people.com.cn.

Xiao Sushi, a sushi chain that owns more than 30 branches in Beijing, is an early adopter of digital solutions for recouping COVID-19-induced losses.

Chen Xiaodong, founder of the chain, told China Youth Daily that they started to shift operations to focus on takeout sales right after the initial outbreak of COVID-19 in 2020. As a result, the proportion of its online sales increased from 26 percent to 46 percent that year.

Backed by more than two years of experience, Xiao Sushi has grown into a mature takeout provider. "We saw an uptick in our takeout business in May when Beijing suspended dine-in services," Chen said.

However, selling takeouts has its downsides. One of the biggest drawbacks, according to Chen, is that there is no interaction between diners and restaurant workers.

"We try to solve this problem by actively communicating with consumers via phone and other means to promptly address complaints should they arise," Chen added.

And as it turns out, offering takeouts is not for every type of restaurant. A staff member of a barbecue restaurant in Beijing's Chaoyang district told China Youth Daily that the restaurant hasn't received many orders since it launched a takeout service.

"Most customers would order items like bibimbap. Very few of them would order barbecue dishes," the staff member said.

To help F&B businesses through such difficulties, the China Hospitality Association hosted a summit and established a committee on the digital transformation of China's F&B industry in Beijing on June 10.

The committee is made up of representatives of more than 20 companies that provide digital solutions to F&B businesses. They include Meituan, Hualala and Weimob.

"Digital technology is particularly important at a time when COVID-19 has accelerated the digitalization of the industry," Chen Xinhua, president of the China Hospitality Association, said at the summit.

"The adoption of new-generation technologies, such as big data, cloud computing, the internet of things, blockchain and artificial intelligence, can gradually bring down the costs of transaction, production and organization for F&B businesses,"Chen noted.

"The pandemic has dealt a heavy blow to China's F&B businesses. But it has also made them recognize the necessity of strengthening their core competencies," said Wang Dongfeng, an executive of Meituan.

For any F&B company, going digital has become one of the pillars for building its core competencies, Wang noted.

Li Zhenhong, CEO of Candao, a provider of catering management systems headquartered in Guangzhou, Guangdong province, said:"Decision-making in the digital era must be supported by data. Accelerating digital transformation can enhance a company's ability to deal with crises."