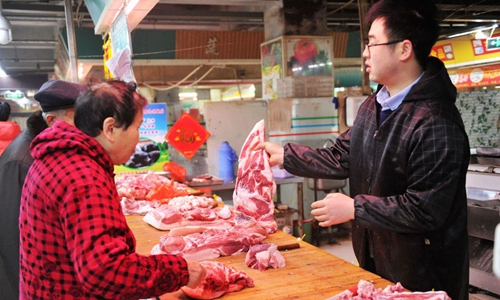 China's southern provinces should make an all-out effort to accelerate the recovery of pig production and consider it a "political task", the Ministry of Agriculture and Rural Affairs (MARA) said.

As the mission has been elevated to the status of a political task, it means that stabilizing pork prices has become China's top priority in order to maintain the stability of people's livelihoods, while relevant measures would boost investors and pig farmers' confidence, experts said.

"Nine provinces in southern China are traditionally the main pig-producing areas, whose production accounts for nearly half of the pigs supplied across the country. Whether pig production in these provinces can be restored is of significance to maintaining stable pork supplies and prices," the MARA said in a report about a meeting in Nanchang, capital of East China's Jiangxi Province on Saturday to promote pig raising.

Local governments should take responsibility in implementing policies and measures to support the recovery of pork production, including fiscal and financial support. Prevention and control measures regarding African swine fever (ASF) should be further strengthened, the MARA report said.

As soaring pork prices have become a threat to public wellbeing, the government has given top priority to stabilizing pork prices, and the national support will help revive farmers' confidence, especially small farms, Li Guoxiang, a research fellow at the Chinese Academy of Social Sciences, told the Global Times on Monday.

Domestic pork supply has been affected by the spread of ASF in most provinces. Losses caused by ASF have exceeded 100 billion yuan ($14 billion), the People's Daily reported on Monday.

"Excluding pork, the adjusted CPI increase rate would be down to 1.3 to 1.4 percent. So if the pork price could be further reduced and stabilized, it could dramatically relieve the pressure on the CPI," Liu Xuezhi a senior economist at the Bank of Communications, told the Global Times on Monday.

Many consumers have shifted to beef and lamb since pork is expensive. Wang Bin, deputy chief for market operations at the Ministry of Commerce, said on November 7 that domestic consumption of pork has dropped 20 to 30 percent.

"Pork is a staple of Chinese people's diet. So if pork prices stabilize, the prices of beef and lamb will accordingly stabilize, which actually ensures people's wellbeing," Liu said.