With robots, augmented reality displays and other advanced technologies, traditional retailers are taking a cue from the online world to find new ways to connect and keep customers. 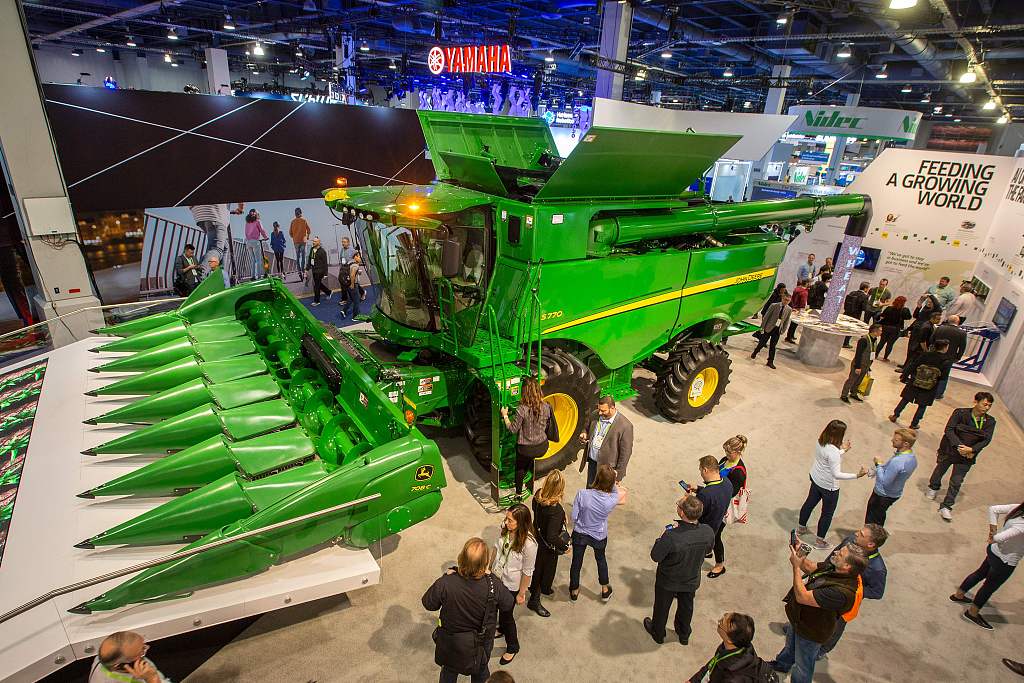 A John Deere s770 combine with AI capabilities is shown at the Las Vegas Convention Center during CES 2019 in Las Vegas on January 10, 2019. (Photos: VCG)

The 2019 Consumer Electronics Show in Las Vegas featured dozens of exhibitors showcasing how brick and mortar sellers can ramp up competition against the likes of Amazon and other online merchants -- and cope with what some call a retail apocalypse.

Chinese retail giants JD.com and Suning each had a large presence at the show in search of partners for their "retail as a service" strategy, to allow merchants to plug into new tech platforms.

"We believe the future of retail is not about online or offline, it's boundary-less," said JD communications manager Yuchuan Wang.

JD showed how retailers can use augmented reality screens that allow shoppers to use gesture control to virtually try on and buy clothing and beauty products.

With these systems, a retailer might not need to stock all apparel products in all sizes, enabling the consumer to simply click on an item in the store and have it delivered rapidly.

One of China's largest retailers, JD also showcased the use of delivery robots and drones which are being used in China, capable of reaching most Chinese consumers within a day or two. 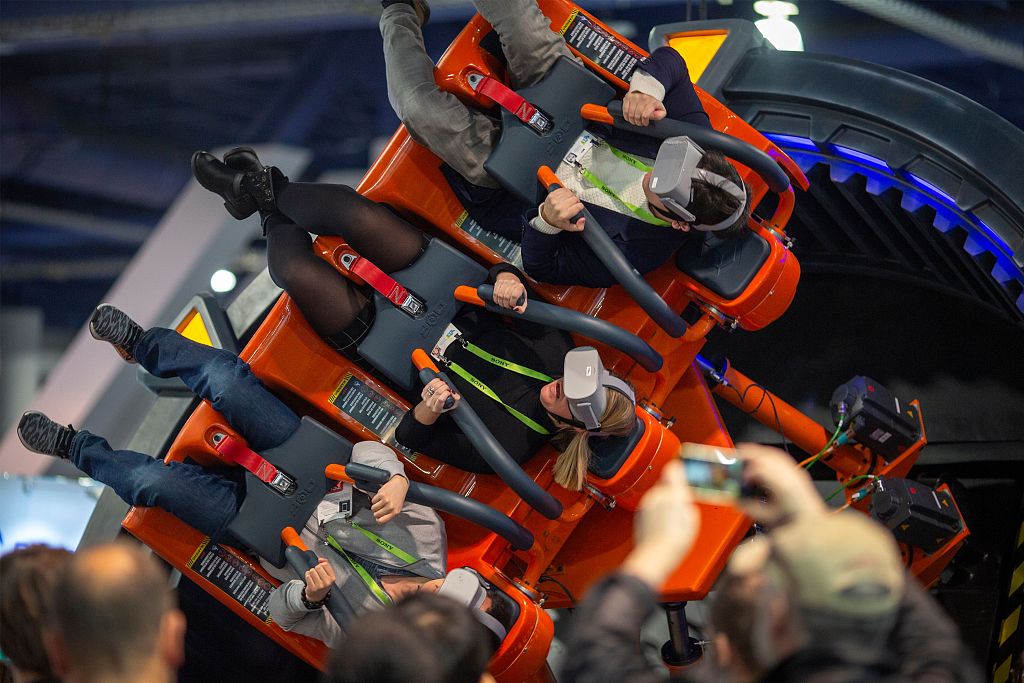 The DOF Robotics Hurricane 360 VR ride is shown at the Las Vegas Convention Center during CES 2019 in Las Vegas on January 10, 2019.

"I can pick up an apple and it tells me how much the price is," said Suning strategy director Watson Wat, who was showing CES attendees how its technology can be applied.

"And with my products I just walk out and it uses facial recognition to identify and charge me."

Suning announced it was seeking partnerships with retailers for its "brain of smart retail" that could enable stores to use its technology.

"I believe the technology is mature now, it's affordable," Wat said. 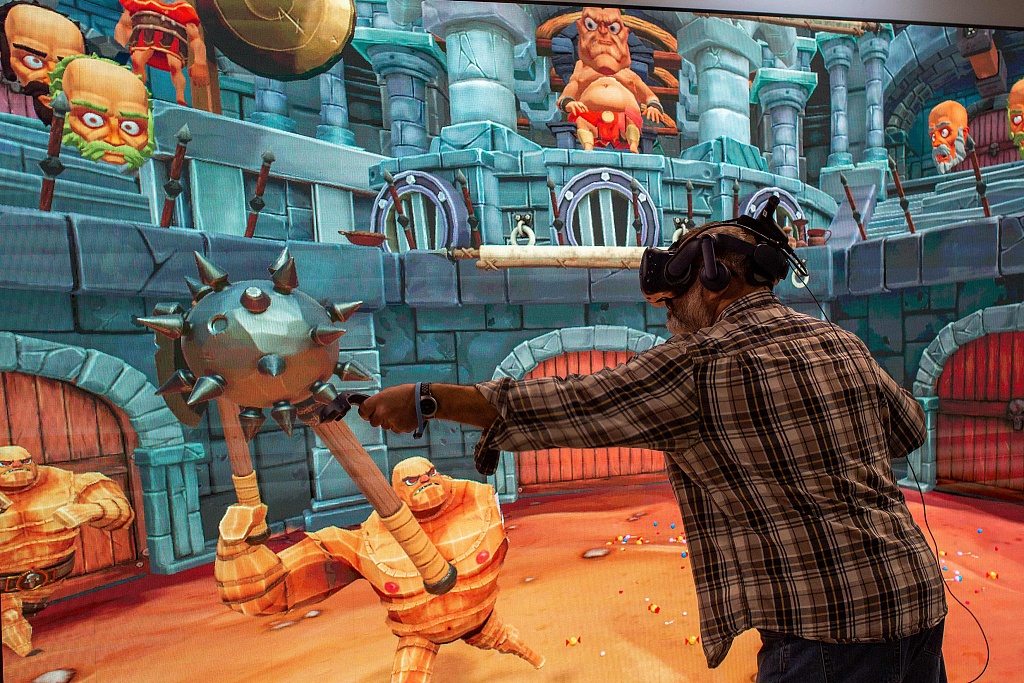 A man plays a game using a wireless VR headset at the DisplayLink exhibit at the Las Vegas Convention Center during CES 2019 in Las Vegas on January 10, 2019.

Elsewhere, Procter & Gamble's booth at CES showed how customers can use of augmented reality and facial recognition built into mirrors to get personalized recommendations for skin care and beauty products.

"We capture a unique identification for each person and deliver personalized results to them" on the basis of artificial intelligence, said P&G's Tina McCarthy.

SoftBank Robotics demonstrated how retailers can use two different kinds of robots -- one to interact with customers and another to monitor inventory and store shelves -- to help improve bottom lines.

SoftBank is partnering with Tally, made by Simbe Robotics, which scans store shelves to keep better track of what is available.

"There is a massive problem in the retail space between what the system says is on the shelf and what really is there," said Steve Carlin of SoftBank Robotics.

A more accurate system can help deal with merchandise which is overstocked or understocked, he added.

"We can start to push the right type of advertisements or incentives to shop the things that are over-inventoried," he said. 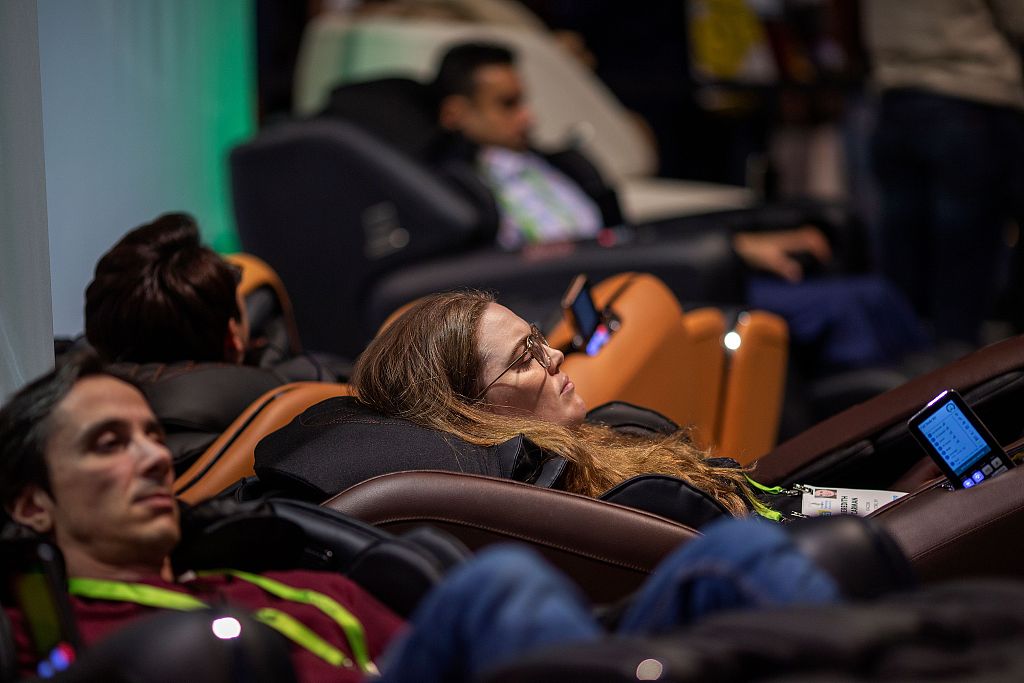 People lie in Dreamworks massage chairs at the Las Vegas Convention Center during CES 2019 in Las Vegas on January 10, 2019.

Getting to know you

SoftBank's humanoid robot Pepper is teaming up on the effort by interacting with customers, including using facial recognition to greet customers by name and guide them to products.

"For retailers, they know a lot about you online but don't really know you at all in the store," Carlin said.

Offering suggestions in the same manner as online retailers can make sense.

Maeve Duska of the consultancy USA Technologies, said many retailers are stepping up efforts to keep up with the Amazon Go concept where customers can walk out and pay automatically without waiting for checkout, a concept known as "unattended retail."

"Finally the brick and mortar retailer understands how much competition there is from online," said Duska, who spoke at a CES panel on high-tech retailing.

"They are trying to duplicate the online experience."

With facial recognition to identify the customer and fingerprint and retina scans which can be used for payment, retailers are discovering ways to speed up the retail experience, often without interacting with a human.

"We're very much a self-service society," she said.

For many younger shoppers, "they do not want to talk to people" in the store. 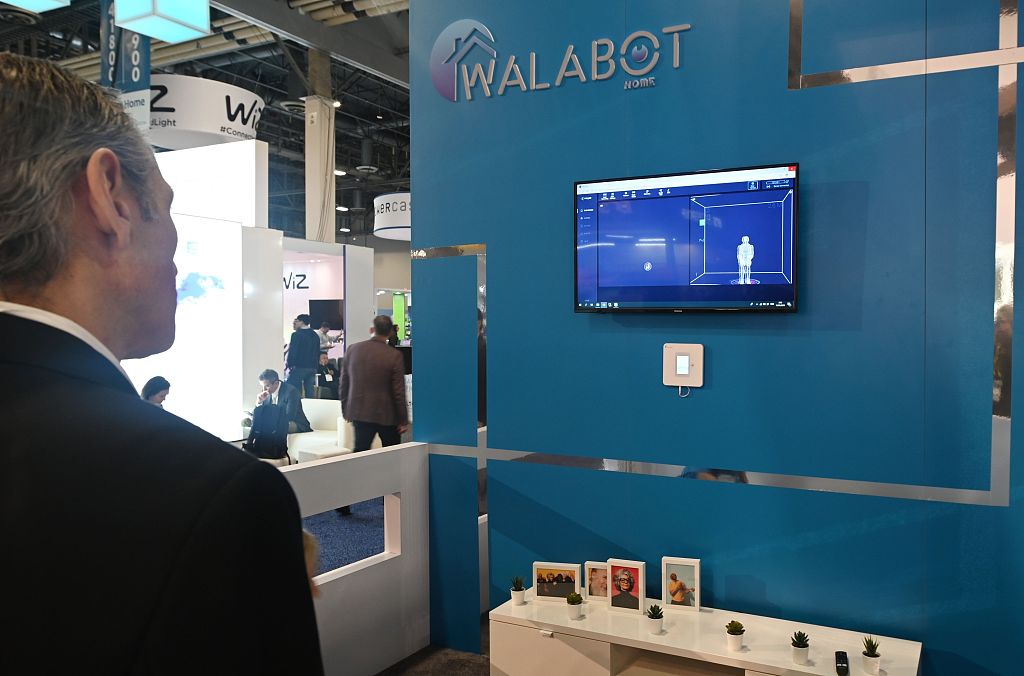 Analyst Brendan Witcher of Forrester Research, another CES panel participant, said some technologies like virtual and augmented reality can offer value for some goods that can help customers visualize clothing or other items.

But he cautioned against too much optimism about the use of data analytics and artificial intelligence to market in the manner of Amazon.

"Most retailers still can't get a personalized email out the door," he said.

"If that's the case it's not time to put a robot in the store.