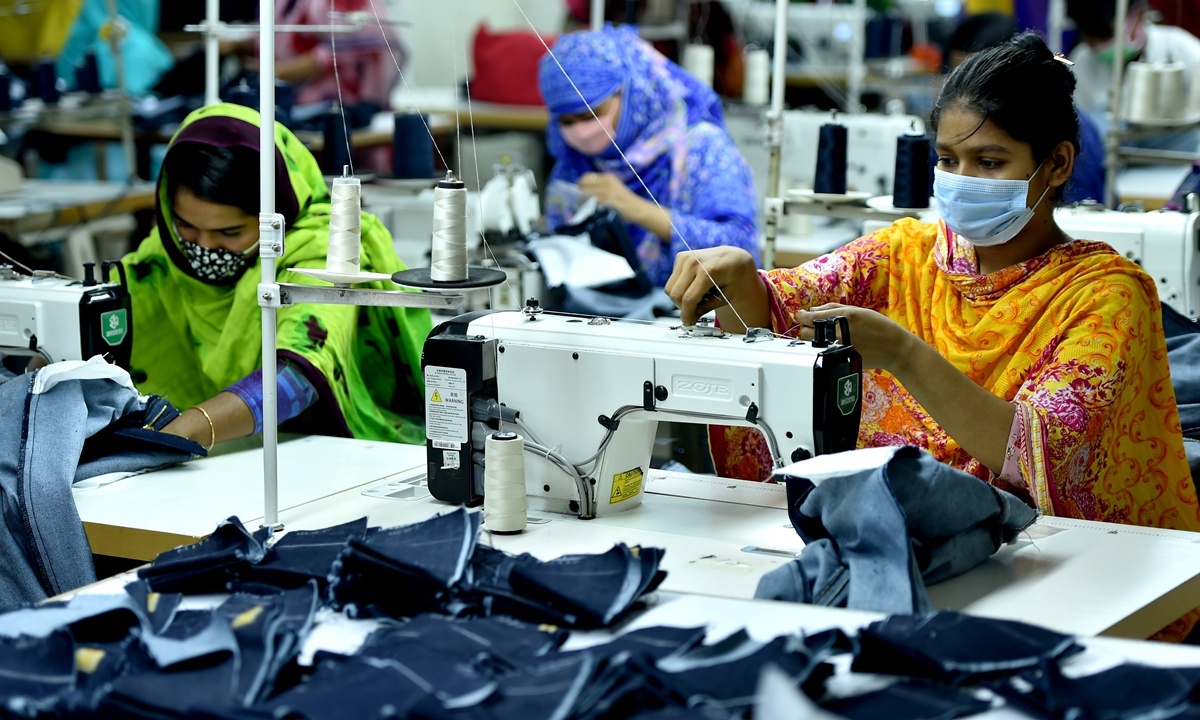 People work at a garment factory in Dhaka, Bangladesh, on August 12. (Photo: Xinhua)

In light of mounting claims that global manufacturers are shifting their supply chains away from China this year due to COVID-19, diversification, and China's growing labor costs, some foreign envoys and trade representatives point out that restructuring supply chains will in fact create value in the region and achieve win-win effects for China, South Asia and Southeast Asia (SEA) countries.

Mahbub Uz Zaman, Bangladeshi Ambassador to China, told the Global Times in a recent exclusive interview that in some countries, it would be feasible to have some supply chains that can be better integrated with Chinese industries so as to achieve win-win results.

"For example, you produce a dashboard, tire or carburetor in Bangladesh, and then you integrate it and create value in China. This is also good for our country. We can build up our local capacity to add value," the envoy told the Global Times.

Nick Koay, chairman of the Malaysian Chamber of Commerce and Industry in China, Greater Bay Area, told the Global Times at the 17th China-ASEAN Expo that Malaysia would benefit from some relocation of supply chains in sectors such as artificial stone, auto parts, cabinet making and IC products.

"Some investors relocate their factories from China to Malaysia to mitigate the costs of additional tariffs generated by the trade frictions between China and the US," Koay explained.

The restructuring of industrial chains and an urgency to recover economies amid the COVID-19 pandemic have boosted demand for a bigger Free Trade Agreement, and it is under such circumstances that the Regional Comprehensive Economic Partnership (RCEP) was successfully inked.

"Now, with the signing of the RCEP, investors from China and Malaysia are able to invest and procure each other's goods with more convenience," Koay noted.

John Paul B. Inigo, vice consul (commercial) and special trade representative at the Department of Trade and Industry of the Philippines told the Global Times at the 17th China-ASEAN Expo that he is happy the large trade pact was signed.

"Though there are still a few things that have to be ironed out, we're very happy that there is now another possibility for ASEAN and the Philippines to trade with the people of China," he said.

Referring to the RCEP - which does not include Bangladesh so far - the Bangladeshi Ambassador said that there were nevertheless some positive outcomes for the country, including the integration of global industrial supply and value chains, and utilizing the advantages of existing complementarities.

"I personally feel that we should take the RCEP as a beacon of positivity. This huge free trade bloc is intended to promote and facilitate trade and investment. Research indicates that when most investors make business decisions, they also take into account the availability of free trade markets, duty free regimes and areas," Zaman said.

He personally agreed that joining the RCEP could be a win-win proposition, provided that a country could take its own needs and priorities into account, and at the same time, countries should try to take care of their interests in those areas where they have comparative advantages, like textiles in Bangladesh.

Starting from July, as many as 97 percent of Bangladeshi products have enjoyed duty free access to the Chinese market, an unprecedented and highly favorable policy allowing the South Asian country's goods to be exported to China at a time when both are striving to recover their economies amid the pandemic.

Zaman said this had created an excellent opportunity for Chinese investors to utilize local industries in Bangladesh, creating value and then re-exporting products to China, thereby integrating Bangladesh into the supply chain and linking up with the huge Chinese market. Bangladesh has also created economic zones and high tech parks where Chinese entrepreneurs and investors can set up industries with 100 percent ownership, he added.

With the signing of the world's largest trade pact, mature infrastructure will better serve industrial integration - something the Belt and Road Initiative (BRI) can contribute a great deal to.

Zaman said that he does not think China is using BRI as a tool to expand its influence in the developing world. "It's also not a debt trap as some critics allege," he added.

"The requirement for global investment in infrastructure is massive, running into trillions of dollars. No single country can supply the entire demand, and China is no exception," he noted.

Instead, the investment in infrastructure projects is for "public good" and is characterized by indivisibilities, the envoy noted, adding that, "in a pandemic situation, it is supplementing the drivers of our economy."

Like Bangladesh, China's cooperation with ASEAN countries has also been strengthened over the past decade, after they successfully managed their differences and built political trust, in particular on the subject of stabilizing the South China Sea.

Inigo, the Philippines trade representative, told the Global Times at the 17th China-ASEAN Expo that as a result of warming relations between China and the Philippines, a growing number of Chinese investors have increased their investments in the country.

"Because if there's no trust, there's no business… What is important for us is that we are open to dialogue," he said.