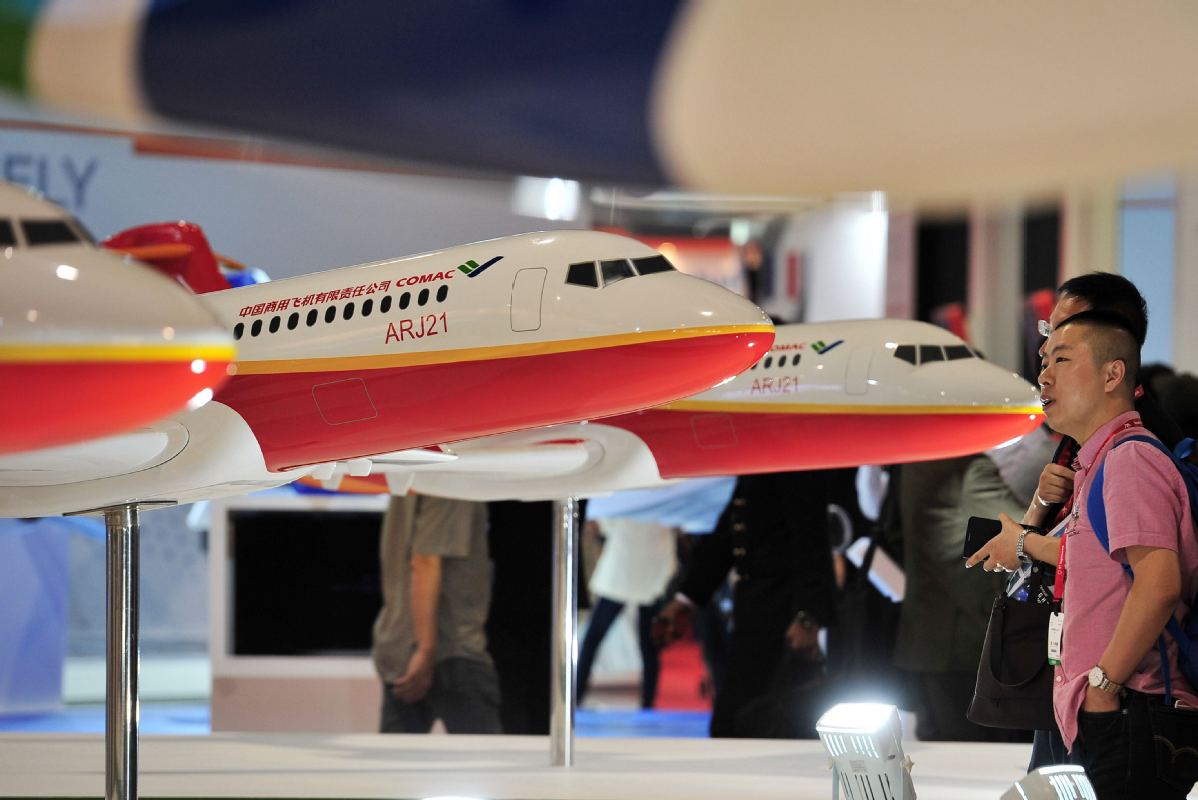 The booth of Commercial Aircraft Corp of China Ltd at an industry expo held in Singapore. (Photo: Xinhua)

Companies from Singapore and China will have greater access to each other's markets, especially in services trade, e-commerce and environmental protection areas, after the upgraded China-Singapore Free Trade Agreement took effect on Wednesday.

The upgraded version is projected to continuously enhance the well-being of businesses and people in the two countries and press ahead with the building of an open world economy, the Ministry of Commerce said in a statement on Tuesday.

The new agreement is a modified version of the previous FTA with revisions to the rules of origin, customs procedures and trade facilitation, trade remedy, trade in services, investment, and economic cooperation. Three cooperation fields including e-commerce, competition policy and environment were added to the document, the ministry said.

Even though China and Singapore signed an FTA in 2008, it heavily focused on accelerating the liberalization of goods trade on the basis of the Agreement on Trade in Goods of the China-ASEAN FTA signed in 2004.

Both sides did not leave much space for articles regarding services and investment in the previous agreement, said Deng Yangfeng, a researcher at the China-ASEAN Research Institute under the Nanning-based Guangxi University.

She stressed that in comparison with the China-South Korea and China-Australia FTAs signed in 2015, which have specific articles to describe services trade and investment conditions, the original China-Singapore FTA is not as advanced as new free trade deals sealed in recent years.

Eager to further deepen their business ties, China-Singapore FTA upgrade negotiations were officially launched in November 2015 and both sides signed the protocol on upgrading the FTA in November last year.

On the basis of mutual benefit, the two countries have reached a high-level free trade agreement in a wide range of areas, setting a good example of win-win cooperation between countries with huge differences in scale, said Loh Ka Leung, Singapore's ambassador to China.

The Singaporean diplomat noted that after the protocol comes into force, it will help promote greater development of bilateral economic and trade relations, as well as encourage other ongoing regional trade deal talks such as the Regional Comprehensive Economic Partnership.

"As many Chinese companies are keen to carry out going global strategies, they can certainly take advantage of Singapore's status as a regional financial center to gain financing, consulting, insurance and risk management services, before they enter other national or regional markets," said Sang Baichuan, director of the Institute of International Economy at the University of International Business and Economics in Beijing.

Sang believes that an upgraded China-Singapore FTA will offer promising impetus to optimize the two countries' industrial and trading structure in the long run.